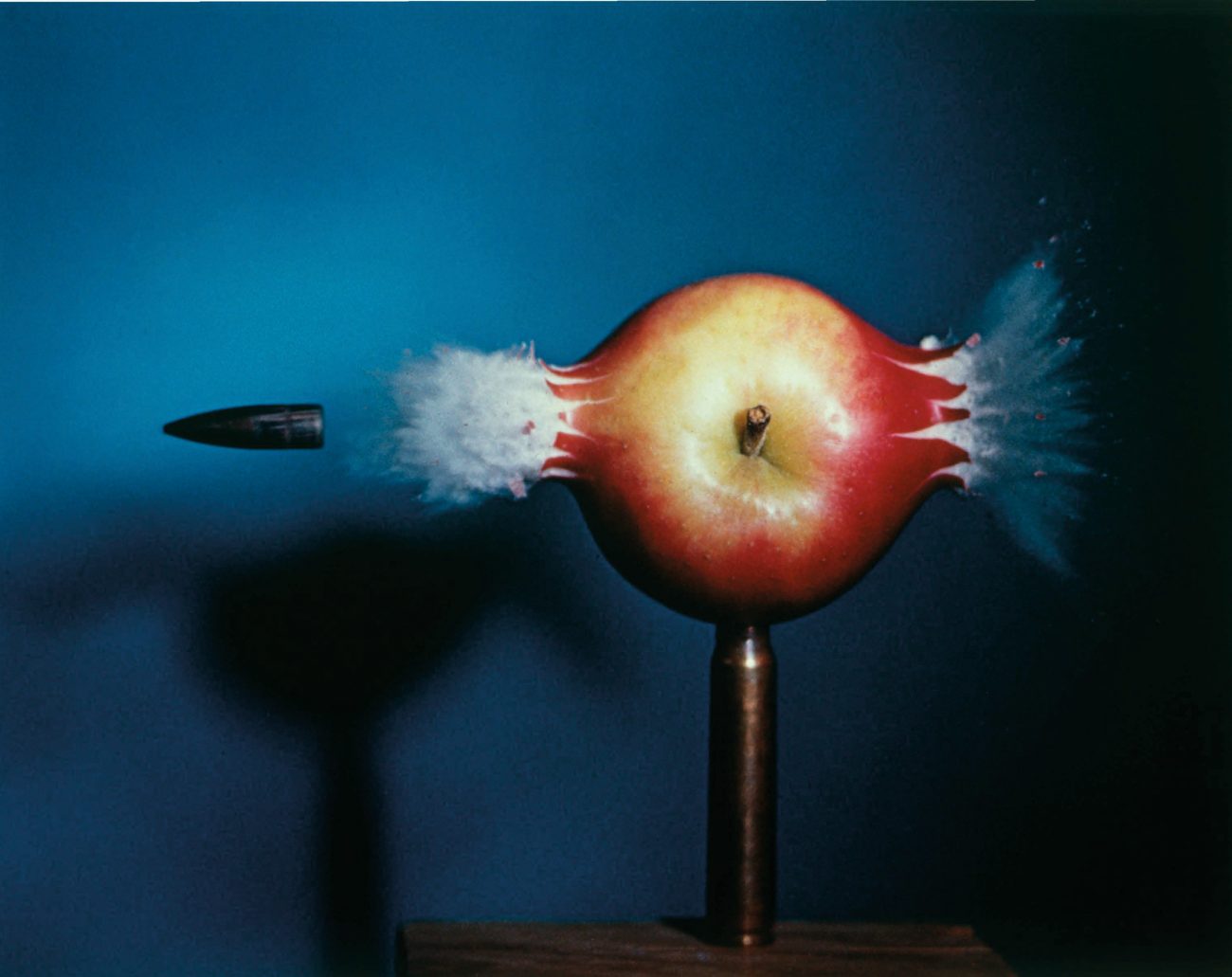 Ours is a constrained consciousness: we hear just a fraction of the sounds around us. Certain wavelengths go right over our heads. And we see only events that unfold slowly enough for our neurons to keep up.

Harold ‘Papa Flash’ Edgerton, professor of electrical engineering at Massachusetts Institute of Technology, lived much of his life in a split-second world.

It was a mundane equipment malfunction that showed him how to stop time in its tracks. While preparing his thesis, Edgerton was monitoring a running electric motor when one of his instruments overheated. As he watched the whirling windings, he noticed that the rapid flashes of the instrument’s warning light momentarily froze the image of the spinning armature.

Back then, flash photography was mostly alchemy and explosions. ‘Doc’ Edgerton instead filled a chamber with mercury, then fired an electrical current through it. The world stood still. His first ‘stroboscope’ had to be wheeled about on a trolley, but it was his years of experimentation, observation and refinement that helped get it down to something you could slot into a smartphone.

Edgerton tamed the impulses of electricity to create ephemeral bursts of light—120 of them inside a second. With Life photographer Gjon Mili, he captured ever-more-fleeting physics with ever-more-complex multi-flash setups: at first it was the burst of a balloon, frame by 10-microsecond frame. Then he swapped mercury for xenon, opening a door into an ephemeral world. Edgerton started shooting apples. Then bananas. Then playing cards. Then Christmas tree baubles. Then bubbles filled with helium. At the 1939 World’s Fair in New York City, Edgerton showed visitors how to take their own strobe shots as he fired a baseball out of a cannon.

During World War II, Edgerton scaled up his experiments dramatically, and eventually proved to a sceptical US Air Force that he could light up entire landscapes at night with quartz flash lamps. Specially equipped aircraft photographed the Normandy beaches using his technology, prior to the D-Day landings. Then, in 1952, his most challenging assignment—to photograph an atomic explosion at the instant of fission. It was like being asked to shoot the Big Bang.

This wasn’t a question of flash duration—Edgerton would be working with 1000 times the ambient light. It was all about shutter speed, and there wasn’t a camera in existence with a shutter anywhere near fast enough. So he went back to his workshop, and eventually came out holding the Rapatronic (for Rapid Action Electronic) camera. Predictably, he’d dispensed with mechanicals, instead building a light-sensitive diode into the front of the camera. His shutter had no moving parts: instead it was opened and closed by a magnetic field. The glare of the atom bomb tests at Eniwetok Atoll triggered the diode, which responded fast enough to realise a shutter speed of 1/100,000,000 of a second.

The molten globules of shattering matter he revealed were as unworldy as they were foreboding. His talents were put to use for more edifying purposes, too: he photographed golfers’ swings, tennis players’ serves and linebackers’ kicks. He froze the frantic buzz of a hummingbird—a spread that graced National Geographic. His images of the crown produced by a plopping drop of milk, entitled ‘Coronet’, were part of the Museum of Modern Art’s first photography exhibition in 1937. In fact, since his death in 1990, Edgerton’s images have been displayed in galleries around the world, but he would never have approved: “Don’t make me out to be an artist,” he once admonished. “I’m an engineer. I’m after the facts. Only the facts.”