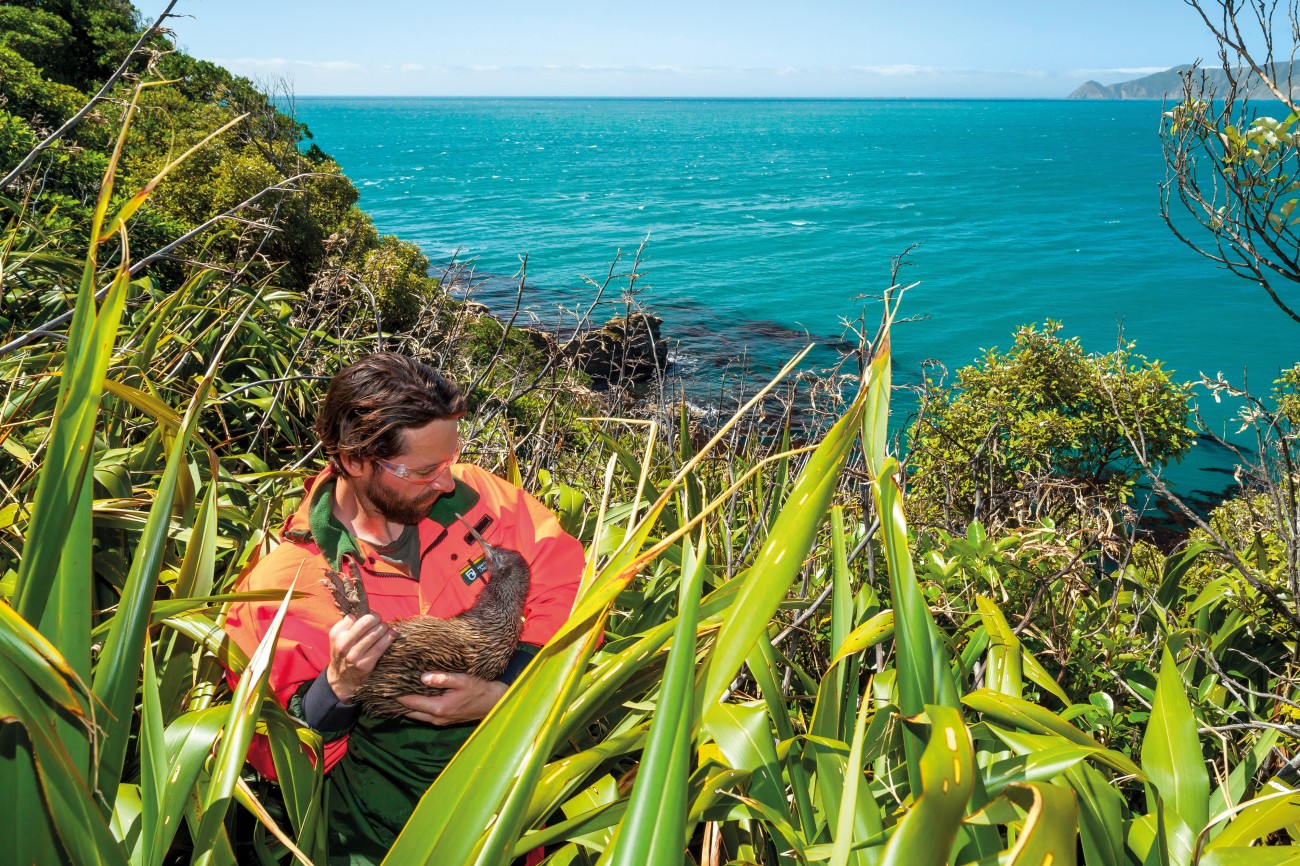 “I’d heard about the rowi but probably like a lot of people, I didn’t know a lot about it,” says volunteer ranger-turned-wildlife photographer Grant Maslowski.

In 2014, he answered a Department of Conservation volunteer posting for a short-term role in Franz Josef. All he knew about rowi was that they were a species of kiwi, and he liked the idea of getting up close to the national icon. “The kiwi is quite an enigmatic bird, really,” he says. “It’s mysterious; you wonder what they’re thinking.”

Maslowski took photographs of them at the same time as doing the tracking work—a hobby of his that “got a bit out of control”.

The role was for two months, but Maslowski stayed for eight, witnessing the breadth of the programme’s work—from digging into burrows to rescue eggs in the Ōkārito Kiwi Sanctuary in late spring, to calling wild kiwi on cold autumn nights to attach transmitters to their legs. On Motuara Island (pictured above), Maslowski helped to catch a contingent of 50 juvenile rowi for their return to the Ōkārito forest.

Given the opportunity to document a conservation programme that had never before been extensively photographed, he gradually gained access to each of its activities. Behind the scenes at the West Coast Wildlife Centre, where eggs are hatched, he photographed the next generation of rowi. “The chicks are hilarious—once they’re hatched, they don’t have the energy to move or run away, and the only sounds they make are little squeaky noises—remarkably like when squeezing a fluffy toy,” he says. “They’re wonderful little birds.”

Documenting a nocturnal bird which spends its daylight hours deep in underground burrows poses a host of photographic challenges. Maslowski attempted again and again to get a photo of a rowi in its nest with an egg, and once, when he was jammed deep into a burrow, camera in front of him, the male rowi within stood up and walked over to investigate. It tapped the lens filter, then placed the tip of its bill lightly on Maslowski’s finger, poised over the shutter—as if to say, No photos, Maslowski recalls. He retreated without getting the shot.

Removing eggs from kiwi parents brought him a twang of guilt. “It feels intrusive,” he says. “Birds get upset, but once you get the egg out, you know the chances of it surviving are around 95 per cent, compared with about five per cent if it’s left out in the wild. You’re doing it for good reasons, but of course they don’t know that.”

Maslowski is still based on the West Coast, doing field work across much of the South Island’s public conservation land as part of DOC’s Tier 1 national biodiversity monitoring programme.

In the Ōkārito Kiwi Sanctuary, one of the breeding males bears Maslowski’s legacy. Franz Josef-based rangers are alternately amused and annoyed at the prospect of tracking down a rowi named Sexy Grant every season to see if he’s incubating an egg. This season, Sexy Grant failed on his moniker, producing no eggs at all.