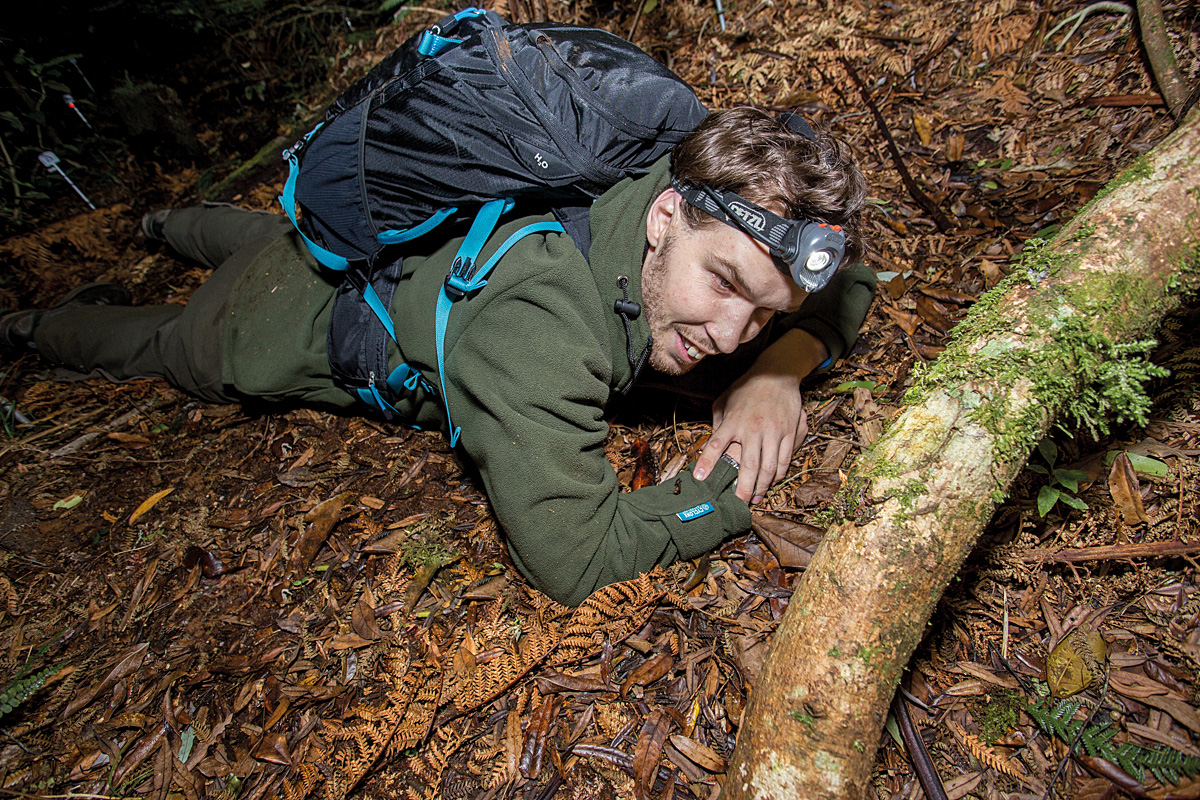 Arriving at Mt Pukeokahu in Pureora, Bryce McQuillan wondered why a threatened frog was being released in a regenerating forest. It didn’t have the mistiness of the frogs’ original home, Whareorino. It seemed non-froggy. But as he made repeated visits to the frog translocation site, McQuillan began to notice that it was unusually rich in biodiversity.

“You sit on the floor and there’s spiders, millipedes, centipedes,” he says. “It’s alive with invertebrates. I’ve seen velvet worms at the release site, and they have pores on the side that they can’t close, so if it wasn’t moist they’d dry out really, really quickly.”

By day, McQuillan is a technician at Scion, a Crown Research Institute in Rotorua, and by night, he goes searching for his miniature subjects. His images of invertebrates have appeared in textbooks, journals and magazines, even on a postage stamp.

“A lot of that has been straight after work—finish work at five, head down there at eight or nine o’clock at night, shoot until four in the morning, drive home, get a cup of tea and go to work,” he says. “We’ve gone out there and just literally sat there with a torch and watched the frogs. You start to see frogs crawl out of places, and you start to see the forest move.”

McQuillan waited to discover which types of vegetation the frogs favoured, to ensure he photographed them in places they would normally be found.

“I find them in astelia, flax—at the base of the flax it gets quite moist in there. The same with a fern bush, you look at the base where the leaves join the tree, and that’s where you find them sitting for a long time, or inside a log, tucked into a little bit of a groove—maybe the humidity and temperature in there is just a micro-degree better.”

The biggest challenge McQuillan faced in producing the story turned out to be technical. A computer crash while his back-up hard drive was disconnected meant he lost a substantial number of images. Only three of the pictures were recoverable, the remainder erased. (McQuillan says he now has an external hard-drive bolted to his computer desk.)

McQuillan can’t remember a time he wasn’t interested in invertebrates, and he started photographing them in order to better observe them. “This was a way that I could see the details on the insects and spiders without having to have them in a jar,” he says.

His passion is isolating species from their habitat and photographing them on a white background so their forms, colours and textures are clear. Many are camouflaged so well that, photographed in the natural environment, they’re difficult to make out. But swap the background, get up close and magnify them, and the story is different: “You can show people the eye arrangement, or the way the legs are attached, or the segments of a beetle,” he says.

Photography, too, provides a reason to spend evenings exploring, a motivating force that keeps McQuillan on the hunt.