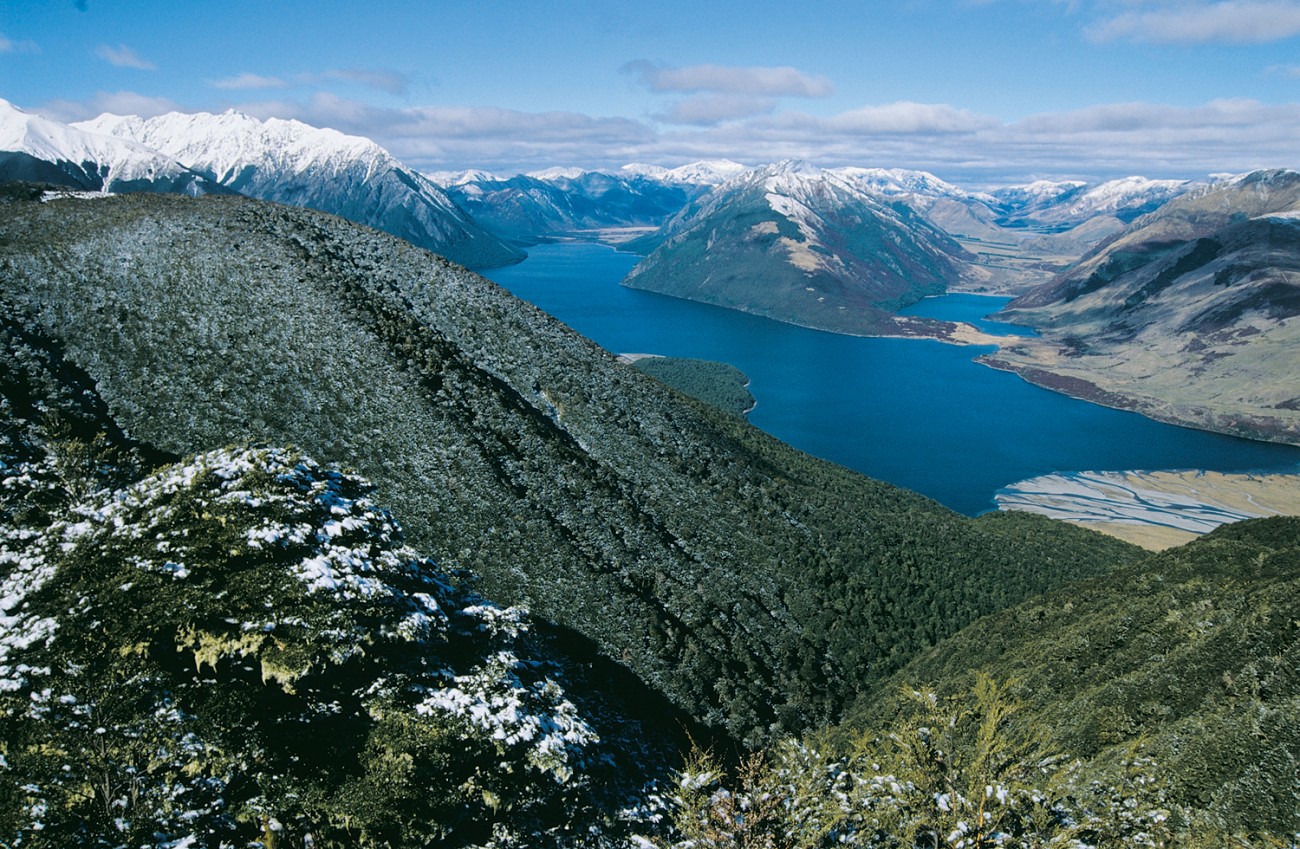 Few tramps in New Zealand are imbued with as much history as Harper Pass. To South Island Maori, who knew the route as Hurunui or Taramakau Saddle, it was one of the most important passages across the Southern Alps, a low pass over which pounamu (greenstone) could be transported from the West Coast. In 1857 Leonard Harper travelled over the old greenstone trail, becoming the first European to cross the Southern Alps, and his name has been linked to the pass ever since. During the mid-1860s Harper Pass enjoyed a brief period of popularity when gold prospectors rushed over to mine newly discovered gold fields on the West Coast, but the more direct route over Arthur’s Pass quickly eclipsed it.

In the late 1930s the government decided to re-open the track over Harper Pass, hoping to create a tramp that would rival the Milford Track. Although its scenery does not seriously rival that of Fiordland, a tramp over Harper Pass offers an enjoyable and relatively easy way to cross the Southern Alps, connecting the Arthur’s Pass and Lewis Pass highways. Attractive beech forests, several lakes, good birdlife, open river valleys, a generous number of huts and one hot spring all add to its appeal. Although the Canterbury side of the route is well tracked and bridged, in the west the Otira, Otehake and Taramakau rivers can all be impos­sible to negotiate after heavy rain. Some navigation is required on the trip.

At Aickens, sign in at the intentions book at the carpark on State Highway 73. Poles lead across farmland to a ford over the Otira River. Parties travelling in the opposite direction can use a shelter, situated on the far side, to wait out floods. Travelling up the gravelly Taramakau River is generally easy, a mixture of track through beech forest on river terraces and in the riverbed itself. At the Pfeifer Creek junction a side track leads up to Lake Kaurapataka, a worthwhile diversion for those who have the time. From the lake it’s possible to travel down the Otehake to join the main Taramakau Valley route. Kiwi Hut (six bunks, open fire, $5/night), on the true right of the river, lies on a large bush terrace about two km upstream of the Otehake/Taramakau junction, and marks the halfway point to Locke Stream Hut. Upstream of here, trampers usually pick their own route up-valley, crossing the Taramakau as
required. Above Locke Stream, a track resumes on the true left, leads through bush for 15 minutes to reach Locke Stream Hut (or No 4 Hut). The recently restored hut was originally built in 1939.

Locke Stream to Harper Pass Biv (2 bunks) 2.5–3 hours Above Locke Stream a well-marked track leads up-valley on the true left, crossing a footbridge to the true right after an hour or so. Travel steepens for the final section up to Harper Pass, soon breaking out into sub-alpine shrublands. The 962-metre pass, marked by a large sign, affords views of high mountains on both the Crawford and Kaimata ranges on either side. A track leads down into the headwaters of the Hurunui River, crossing to the true right shortly before reaching the small orange Harper Pass Biv.

Harper Pass Biv to No. 3 Hut (16 bunks, wood burner, $5/night)
via Cameron Hut (4 bunks, open fire) 3 hours From the biv, easy travel through increasingly attractive beech forest leads down old river terraces on the true right of the Hurunui. At Cameron Hut, the track emerges onto the first of many open grassy flats, which were grazed until recently. Downstream of Cameron Hut the track crosses a three-wire bridge over Cameron Stream, followed by flat travel to No. 3 Hut, set in a clearing. DOC have a locked research base nearby, which is used for undertaking pest control and wildlife work in the valley.

No. 3 Hut to Hurunui Hut (20 bunks, wood burner, $5/night) 2.5–3 hours The track continues to travel eastwards, sidling through pleasant stands of beech forest above the Hurunui River, pausing to divert to the Hurunui hot springs on a signposted side trail after
about 90 minutes. These natural springs, perfect for a winter soak, offer room for about five to six people. About another 90 minutes of travel leads to the large, modern Hurunui Hut.

Hurunui Hut to Hope-Kiwi Lodge (21 bunks, wood burner, $10/night) 5–6 hours From Hurunui Hut it is possible to shorten the tramp by walking out to Lake Mason and ending at the Lake Sumner Road. But the more interesting walk continues down to the shores of Lake Sumner, crossing the Hurunui River on a long swingbridge en route. This section is known as the Kiwi Pack Track. It ambles over matagouri flats, then through stately red beech forests, and crosses the Three Mile Stream (where a worthwhile track leads down to Charley’s Point on the shores of Lake Sumner). Beyond the stream, undulating forest travel on a beautifully benched
track climbs steadily to Kiwi Saddle (where another enjoyable side track diverts to the tranquil Lake Marion) and over into the open, dell-like expanse of the Kiwi Valley. A retired farm vehicle track leads down-valley to the substantial and corralled Hope-Kiwi Lodge.

Hope-Kiwi Lodge to Windy Point via Hope Shelter 5–6 hours From the lodge, follow the track leading northwards to a swingbridge over the Hope River. From here, travel is basically a mixture of open river terraces and beech forest, remaining on the true left of the Hope. Beyond Hope Shelter, the track begins a slow climb onto river terraces high above the river. The last hour or so crosses scruffy farmland, descends to a swingbridge that spans a gorge in the Boyle River, then continues on to the bus shelter at Windy Point.