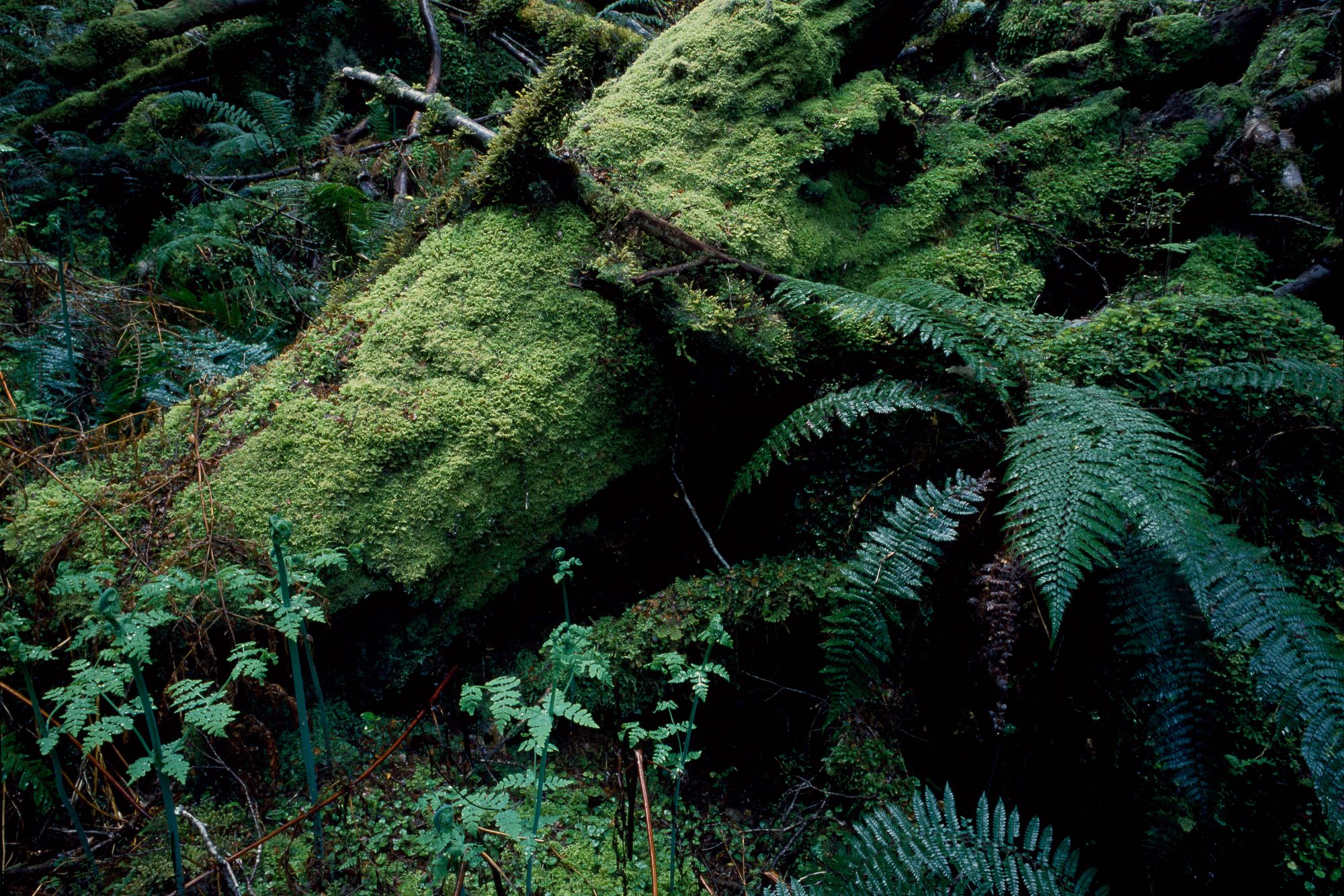 In the Keplers they say it always rains on Tuesdays . . . except for the winter of 1988 when I trained just the once, for two months solid.This is a region where water rules, sculpting the mountains and scouring the valleys. It has always been this way. Water shaped Fiordland, ice carving through ancient rock and leaving behind 300-metre deep furrows to be filled by the sea as the ice ages passed. This is not a passive landscape. It demands to be noticed. Massive limestone bluffs glower at you as you pass under them. Delicate mosses intermingle with rubbery fungi and crumbling dead wood, drawing the eye in a dozen directions at once.

The Kepler Track opened in February 1988 and New Zealanders flocked to it. Between February and April nearly 2000 people came to try out the 65km track, the newest jewel in the Fiordland National Park’s crown.The track came into being largely through the persistence of two former park board members,Les Henderson and Alf Excell, who initially proposed a “Round the Mountain Walk.”Operation Raleigh, an international organisation which sets up youth-oriented projects all over the world, offered to help build the track. With funding from the New Zealand Tourist and Publicity Department and oversight from the Department of Conservation the track was opened in time for the 1988 National Parks Centennial.

Building a track takes a lot of sweat, a lot of beer and a lot of shoe leather. So says Gilly Adam, a Department of Conservation officer who has worked on Fiordland’s tracks for more than 12 years. Track-building involves putting in drains, moving dead trees,chainsawing through roots, building board walks and shovelling countless wheelbarrow-loads of gravel.Helicopters were used on the Kepler to drop in pre-cut timber and supplies for the workers. About 40 Department of Conservation staff have worked on the track and in late 1986/early 1987 240 members of Operation Raleigh spent six months working in shifts;ten days on, four days off. Sometimes conditions were so bad that workers could see only as far as their hands.The track will be completely finished by May 1989 but workers will always need to be on hand to cope with the unexpected. In spring of 1988 the track to Dock Bay had to be shifted because it was under water; Lake Te Anau was the highest it had been in ten years. Maintenance is a never-ending challenge in Fiordland.

The early part of the track up to Mt Luxmore looks across to what used to be “Beer’s farm”, an isolated holding on the west bank of the Waiau river. John Beer, known as Jack, arrived in about 1890 and farmed here until his death in 1930. He had around 400 sheep,shearing them all year round, on the spot, wherever he could catch them. He cut a track up through the bush so that he could graze his sheep on the grassy slopes of Mt Luxmore in the summertime,but track workers have never been able to locate it. The story is told of Jack Beer pushing a pig in a wheelbarrow 13 miles to the farm of Burton Murrell at Manapouri, who couldn’t buy it, and then on to Te Anau. He once picked up a sack of flour from the Te Anau hotel and carried it home, where he found it wasn’t addressed to him. He promptly carried it all the way back again.

Nothing is ever certain about the weather in Fiordland. Temperatures can plummet 20 degrees or more in a matter of hours. From a hot nor’wester in the morning you may be faced with a blizzard of snow in the afternoon. Storms arrive with shattering suddenness and clear just as quickly. Because the Keplers are on the leeward side of the Main Divide the area receives less rain than other parts of Fiordland — up to 3000 mm of rain per year as opposed to 8-9,000 mm on the coast. The alpine section of the track may be closed during winter because of snow or bad weather. Check with the Department of Conservation’s Te Anau office (telephone 0229-7921) for weather reports or ask the but wardens during the open season.

Wear good, preferably lightweight boots, definitely not sand shoes. You should be prepared for all kinds of weather, with a hip-length waterproof parka, wool or polypropylene hat and gloves and good overtrousers (especially in winter). Several layers of thin wool or polypropylene are better than a single thick layer. It is a good idea to carry an extra day’s rations, and plenty of chocolate. In summer water must be carried as there is no supply between Luxmore and Iris Burn hut.

Walking the track normally takes three to four days, depending on your fitness, time, and inclination. If possible allow an extra day in case of bad weather before attempting the alpine section of the track. Park staff advise walking the track from Te Anau-Luxmore-Iris Burn-MoturauTe Anau. After the first night’s stay you are then best able to assess the weather for the day across the mountain tops; if the weather is bad and you have no extra time, the trip back to Te Anau takes only a morning. This route also puts the hardest part of the climb behind you on the first day. Te Anau to Mt Luxmore and back is a good day trip in summer while the track up river from Rainbow Reach or through to Shallow Bay or Moturau but from the Rainbow Reach swing bridge make gentle half day walks. Access to the bridge is signposted from the Te Anau-Manapouri highway. Above average fitness and some tramping experience is required for the complete circuit.

The Kepler Mountains are on the eastern fringe of the Fiordland National Park, with the Murchison range to the north and the Hunter Mountains to the south. Spire Peak (1696m), west of the Iris Burn, is the highest peak in the range, with Mt Luxmore one of the lowest (1472m). Lake Te Anau is the second largest lake in New Zealand, spreading over 341 square kilometres and 65 kilometres long. Lake Manapouri is the second largest in the Park. It was originally named Moturau, meaning “many islands”, but later renamed Manapouri, short for manawapopore, or “anxious heart”, the condition experienced by a traveller caught in a storm while canoeing on the lake. The Kepler Track itself includes lake edge strolls, mountain climbs in beech forest and tramping over open mountain tops and through Fiord-land’s famous U-shaped glacial valleys.

The track brochure available from Department of Conservation Park Headquarters contains a simple map of the track, without contours. Alternatively, use NZMS 140 and 149, both 1:63,360 (one inch to the mile). There are no guides available for the Kepler Track, but but wardens will assist track walkers wherever possible.

All three huts on the Kepler (Lux-more, Iris Burn, and Moturau) are modern and equipped with heating, gas cooking and lighting, mattresses, hot and cold running water and flush toilets. Each has 40 bunks. During the open season, which usually begins in early November and runs through to the end of April, huts cost $12 per night; out of season (when but wardens are not present) the fee is $8. Camping is allowed at Dock Bay, Brod Bay, and Shallow Bay at designated sites.

What to look for

In the forests, watch and listen for bellbirds, tomtits, grey warblers, fantails and chaffinches. In the Iris Burn you may chance upon a blue duck or hear the calls of the brown kiwi at night. Robins and yellowheads are also to be found in the Iris Burn and cheeky yellow-crowned parakeets along the Waiau River. Pipits and keas live above the high tussock slopes and you should look for small fossil shells just below the bushline at Mt Luxmore. At dusk you may see bats, New Zealand’s only native land mammal, especially near the Waiau River. At night near Shallow Bay you may hear the large golden bell frog or the smaller whistling frog calling from the pools. The sphagnum moss bog just after Moturau but is worth a close inspection.