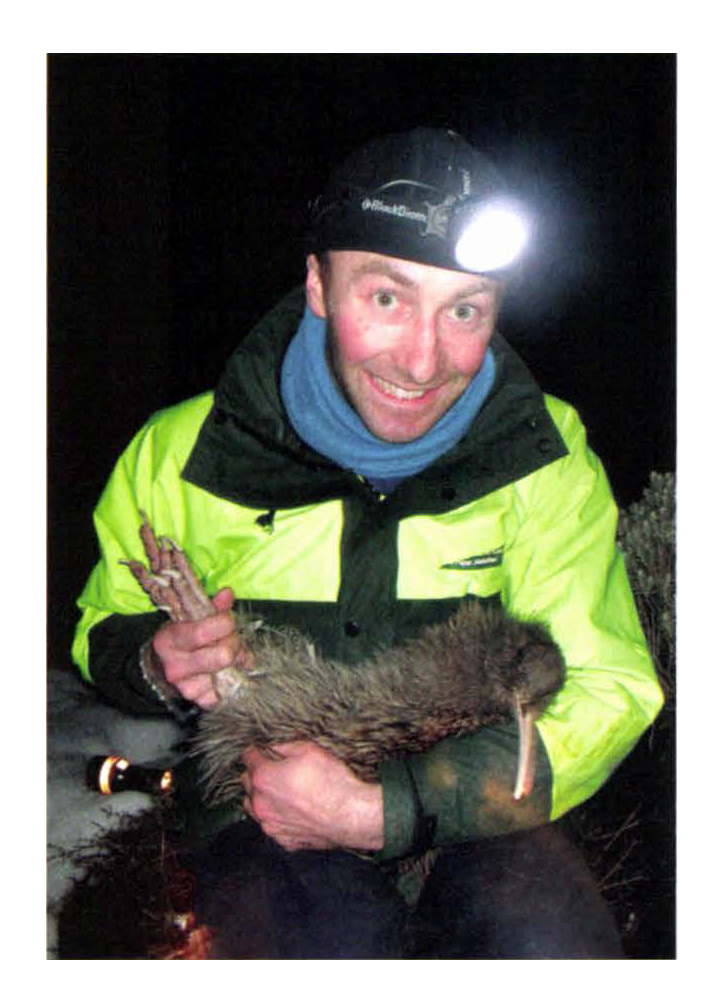 Up to 94 per cent of young wild kiwi perish, and although adult birds are fairly long-lived, their numbers are falling by an estimated 6 per cent a year. At this rate, wild kiwi will be­come extinct in the North and South Islands within a human lifetime. The Department of Conservation (DoC)—like the country at large—is highly concerned.

One of the principal killers of young kiwi is Mustela erminea—the stoat. Controlling stoats is not easy. They are intelligent, highly mobile, suspicious, and fussy when it comes to being tempted by baits. Yet for the sake of kiwi and a lot of other native birds, we have to get on top of them.

In 2002, DoC started a low-in­tensity but large-scale operation to control stoats in the Murchison Mountains. These form a 51,000 ha peninsula on the western side of Lake Te Anau. Protected on three sides by the lake and on the fourth side by remoteness, the area is home to a number of increasingly scarce native birds. Most famous is the takahe, but also present are mohua, blue duck, kea, kaka, kakariki, New Zealand falcon, weka, rock wren, tomtit, tui, bellbird, fantail, rifleman, grey warbler, brown creeper, silver-eye, pipit—and kiwi.

In the Murchison Mountains stoat-control operation, 730 Fenn traps are set at 200 m intervals to make 120 km of trap lines no more than 2 km apart over a 15,000 ha area. The traps are serviced quarterly. In 2003, 175 stoats were caught; in 2004, 149. February is the best month for catching stoats, because juveniles are out and about. In both years, about 80 were caught in that month alone.

In May 2003, within the stoat  control area and with financial help from the Bank of New Zealand Kiwi Recovery Trust, a project to monitor how the operation was affecting kiwi was established on a 1450 ha swathe along Mystery Burn. A comparative site outside the stoat-trapping area, along Snag Burn, has been set up more recently.

Kiwi are “called in” at night (us­ing taped calls and a shepherd’s dog whistle), netted and measured. Males have a radio transmitter attached to a leg with hospital identification bands. The transmitters weigh 20 g, have a life expectancy of 14 months and emit 40 radio pulses a minute.

Transmitter signals are checked weekly with a receiver. A signal coming from the same spot three weeks in a row indicates nesting, and nests are checked for young once a “hatch window” (70 days from the first possible lay date) has been calculated. Each chick has a 6 g transmitter attached to one of its legs before 8 days of age, at which stage most leave the nest area for good.

In the breeding season July 2003 to mid-February 2004,10 male kiwi near Mystery Burn (where stoats are trapped) were monitored. One died early in the season. Another (with help from a female partner!) pro­duced a chick that survived, while a third couple’s chick was killed or scavenged by a possum at four days old. Two formed partnerships that between them resulted in three infertile eggs, and the other birds didn’t breed at all. No evidence of stoat predation was found, yet only one chick was raised from what was, in effect, nine pairs of adults. Hardly an impressive reproductive record. Heavy snowfalls may have discour­aged breeding that season—several of the birds lived above the tree line—as may a strong earthquake that rattled the area.

During the 2004-2005 breed­ing season—still in progress at the time of writing—results have been a little different. In the Snag Burn area (where stoats are not trapped), two infertile eggs were laid and two chicks were killed by stoats within a fortnight of leaving their bur­rows. One more chick hatched in early February and is being watched closely using a “mortality transmit­ter”, which changes from 40 to 80 pulses per minute should the chick stop moving for 12 hours—a prob­able indication of death. At Mystery Burn, two chicks have hatched and look likely to survive to adulthood, one chick died in the egg halfway through incubation, and a kea de­stroyed another nest with egg.

Since these few chicks account for most, if not all, of the progeny produced by 10-12 males and their partners across both areas, produc­tivity is clearly very low. This means it will take quite a few years for suf­ficient numbers to accumulate to reassure the stoat-control workers that the measures they are taking are benefiting kiwi. The team plans to catch more adult males this year to boost the sample size.

Megan Willans, DoC’s overseer for the project, raises another con­cern when she comments: “We have not had a mast seeding of beech yet, and we may find that during mast summers the level of control is not enough. But this may not be a prob­lem if enough chicks get through in the non-mast years. As you can see, we are working with a complicated web of ecological forces.”

Indeed. It’s not easy for kiwi. Or for those who are trying to help them.