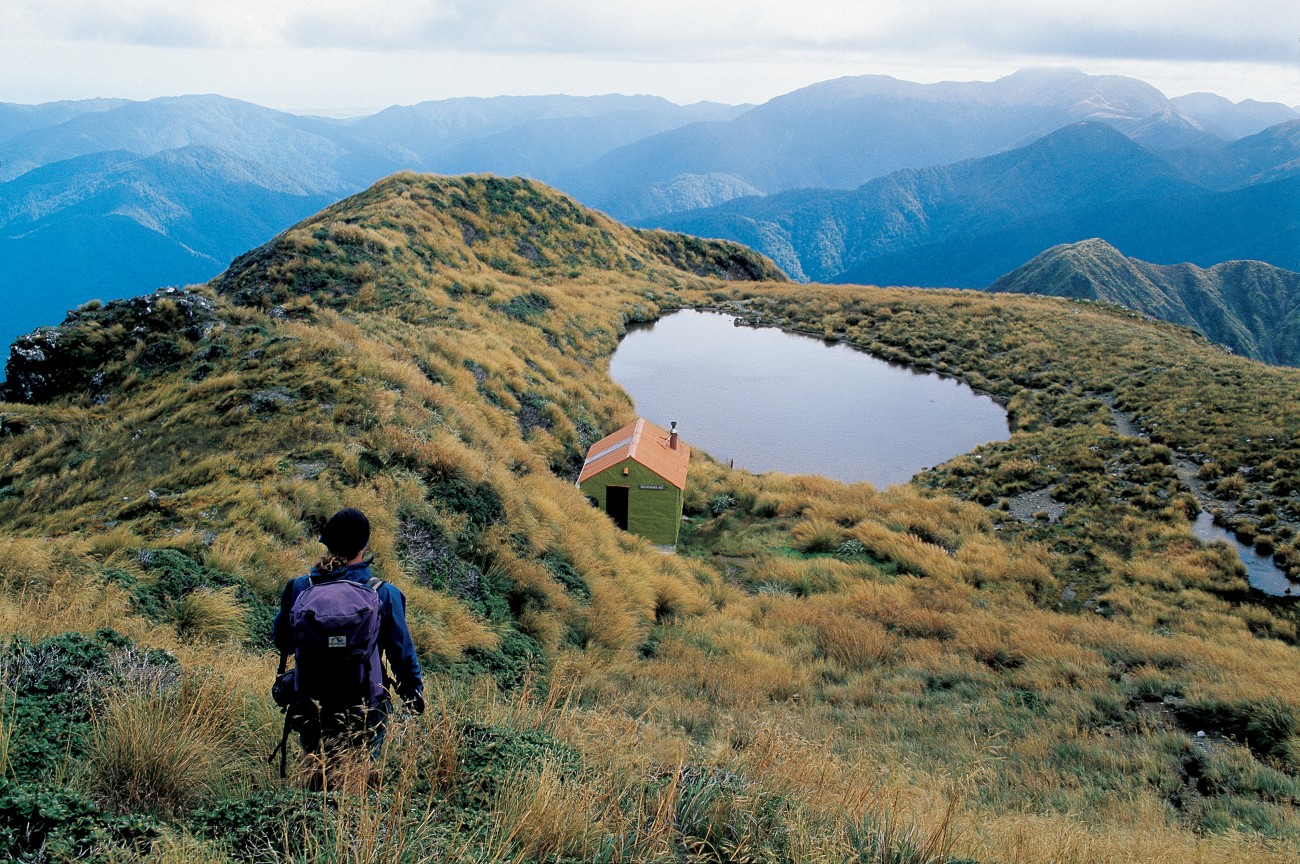 The Southern Crossing of the Tararua Range is a track with a long history, dating back to the early part of the twentieth century. A group called the Mt Hector Track Committee proposed developing a track to connect Otaki with the Wairarapa. Through their efforts, three huts were erected, amongst the earliest built in the Tara­rua Range.

Beginning from Otaki Forks, the track ascends through forest to Field Hut, then onto the tops to reach Kime Hut. From Kime, the track climbs Mt Hector, the high­est point in the southern Tararua Range, and one that affords 360˚ views over Wel­lington and the Wairarapa. South of Mt Hector the route crosses a series of other sub-alpine peaks, reaching the bushline near Alpha Hut.

From Alpha Hut the original Southern Crossing route used to descend to the Tau­wharenikau Valley, then climb over Mt Reeves to end at Walls Whare, near Grey-town. These days, however, most parties opt to walk out to Kaitoke, near Upper Hutt. Although this is undoubtedly easier for organising transport, it’s somewhat ironic that this latter route remains in the west without actually crossing the range.

Otaki Forks is a popular place for swimming, camping and picnics. From the overnight park­ing area, a short track leads down to a picnic area and a swingbridge over the Waiotauru River. Across the bridge, past the turnoff to Parawai Lodge, a brief climb leads to a grassy terrace. At a track junction follow the signposted track leading to Field Hut. A long but not particularly strenuous ascent through forest ensues to reach the historic hut—built in 1924 and now the oldest purpose-built tramping club hut remaining in the country.

Above Field Hut a short section in forest and sub-alpine shrubs leads to Table Top. Beyond here the track ascends the open tops of Judd Ridge, which can be very exposed to the ele­ments. While there are few marker poles, the track is worn enough for it to remain clear ex­cept when it’s obscured by snow. Near the top some waratahs appear, and shortly after comes the signpost indicating the turnoff to Bridge Peak and Maungahuka Hut. Not far from here, just over the rise of Hut Mound, Kime Hut lies nestled in a shallow dip by a prominent tarn.

From Kime Hut you embark on the exposed tops to Alpha Hut. Initially the track climbs to Field Peak, then drops sharply to a saddle, from where the final ascent to Mt Hector begins. At 1529 metres, Mt Hector is the highest point on the crossing, and one of the finest viewpoints in the Tararua Range. A large wooden cross marks its unmistakable summit. On a good day the Kaikoura Ranges can be seen, rising beyond Wellington Harbour, while Kapiti Island and the Marlborough Sounds lie to the west.

From Mt Hector the route heads almost directly south, dropping to a shallow saddle before climbing over the Beehives. Beyond is a narrow section of ridge that can be unnerving in high winds. Undulating tops travel leads to Atkinson, marked by a short waratah. Past Pt 1372m the terrain remains flat as far as Aston, where the track curls south-east, around the Dress Circle. After a climb onto Alpha, the track swings directly east. Alpha Hut lies down the other side, nestled amongst stunted silver beech trees.

From Alpha Hut, a forested track leads to Hells Gate, where there is a brief dip in the ridge. Shortly beyond you reach a track junction. The left branch leads to Bull Mound and out to Walls Whare via Cone Hut. The traditional Southern Crossing route was via Bull Mound to the Tauwharenikau Valley, downstream to just north of Tutuwai Hut and over Mt Reeves. In­stead, head right, over Omega, and continue along the undulating forested terrain of March-ant Ridge.

While passing through attractive silver beech forest, the Marchant Ridge track is deceptively long, and a longer but preferable alternative lies on the route out the Tauwharenikau Valley via the Block XVI track (which is clearly signposted on Marchant Ridge). The bridge at the bottom of Block XVI has been removed and a new bridge built about 100 metres north of the conflu­ence of the Marchant Stream with the Tauwharenikau River. Although it involves a 300-metre descent, once down in the Tauwharenikau Valley travel is generally flat on forested river ter­races. At Smith Creek Shelter a well-benched track ascends gently to the head of Smith Creek, interrupted by one scramble around an area of slips. An alternative track, well signposted, has been formed around the slips.

Near the head of the creek, the track climbs over a saddle of regenerating forest to begin a sidle towards Kaitoke, passing the Marchant Ridge track en route.