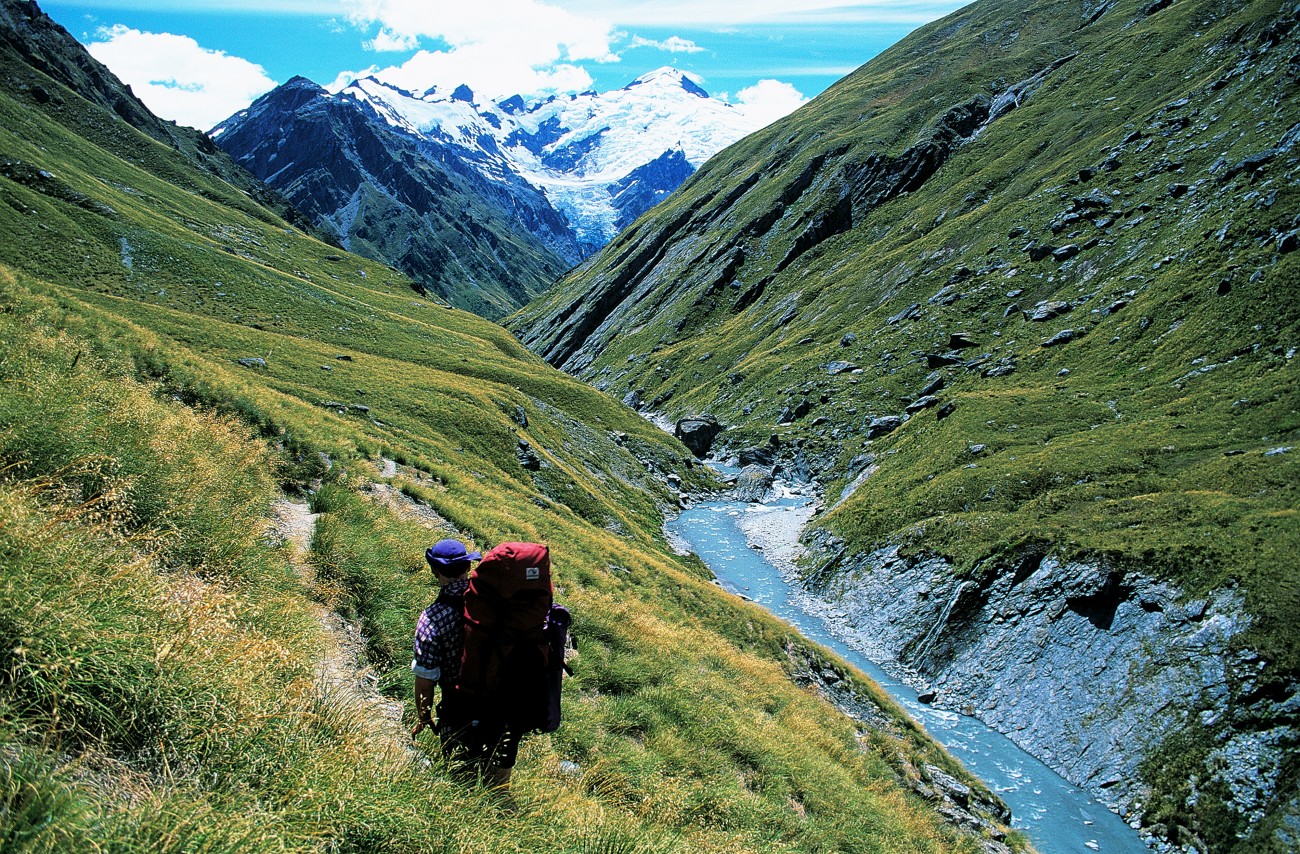 From the Muddy Creek carpark, follow a vehicle track across farmland. Beyond Arthurs Creek, a poled track leads to 25-mile Hut, owned by Rees Valley Station and maintained by the Otago Tramping and Mountaineering Club. Mt Earnslaw/Pikirakatahi dominates the views, with wa­terfalls spilling off its glaciated flanks.

Another couple of hours easy walking leads to the end of the farmland, and the Mount Aspiring National Park boundary. Soon after entering the forest, the track crosses a footbridge leading to the true right of the Rees River.

Aside from one section of travel across Slip Flat, the remaining three-hour walk to Shelter Rock Hut remains largely within the confines of the forest. A kilometre from the hut, the forest gives way to subalpine shrublands. Just before Shelter Rock the track crosses the Rees again, on a footbridge.

Travel from Shelter Rock to Dart Hut involves crossing Rees Saddle, a 1471 m subalpine pass at the head of the Rees. Although well-poled and normally straightforward, under adverse weather conditions or heavy snow it may prove impassable. In winter it is subject to avalanch­es. Upstream of Shelter Rock Hut, a benched trail cuts through sub-alpine plants for an hour or so before breaking out into a tussock basin. Rees Saddle is the obvious low point at the valley head. After crossing the river, poles lead up a steepish last pinch beneath impressive bluffs to the saddle. Here, a whole new vista opens out. Below lies the Snowy River, with Mt Tyndall at its head; wide open, mountainous country that typifies the Mount Aspiring region.

After an initially steep descent, the track beside the Snowy Creek levels out. About halfway down the valley, the track crosses a swingbridge (removed during winter months to avoid ava­lanche damage) to the true right. After another section of steep downhill, the track levels out again to cross the Snowy River on a footbridge shortly before Dart Hut.

This side trip is a strenuous and long day from Dart Hut, but well worth it for the exceptional views. It is not a formed track, and should only be attempted by those confident of navigating on a marked route.

From Dart Hut re-cross the footbridge over the Snowy and follow poles and cairns into the upper Dart Valley. Further up, the route crosses the first of a series of moraine terraces left after the retreat of the once-extensive Dart Glacier. Two tributaries here could pose problems when in flood. After about three hours, the route begins to climb moraine and tussock slopes towards Cascade Saddle. There are increasingly good views of the Dart Glacier and Snowdrift Range. Cascade Saddle, situated on a large tussock shelf, offers unsurpassed views of Mt Aspiring and the West Matukituki Valley. In summer, alpine flowers proliferate amongst the sheltered tarns and hollows of the saddle.

The track down valley from Dart Hut is long but not particularly strenuous, and follows the Dart River on the true left. Beech forest dominates until Cattle Flat, a long grassy section marked by cairns. More travel on a good track through beech forest leads to Daleys Flat Hut.

From Daleys Flat Hut a track through beech forest leads to Dredge Flat. Beyond the flat, a climb over Sandy Bluff ensues, followed by a descent to Sandy Flat. Some parties opt to jet boat from here; it provides an alternative to the rather monotonous plod out to Paradise. Those walking still have another four-to-five hour walk, alternating between unmarked flats and marked forest. At Chinamans Bluff there is a shelter and carpark, which is accessible by two-wheel drives except after rain or snow. It’s another 10 km to the all-weather carpark at Paradise.