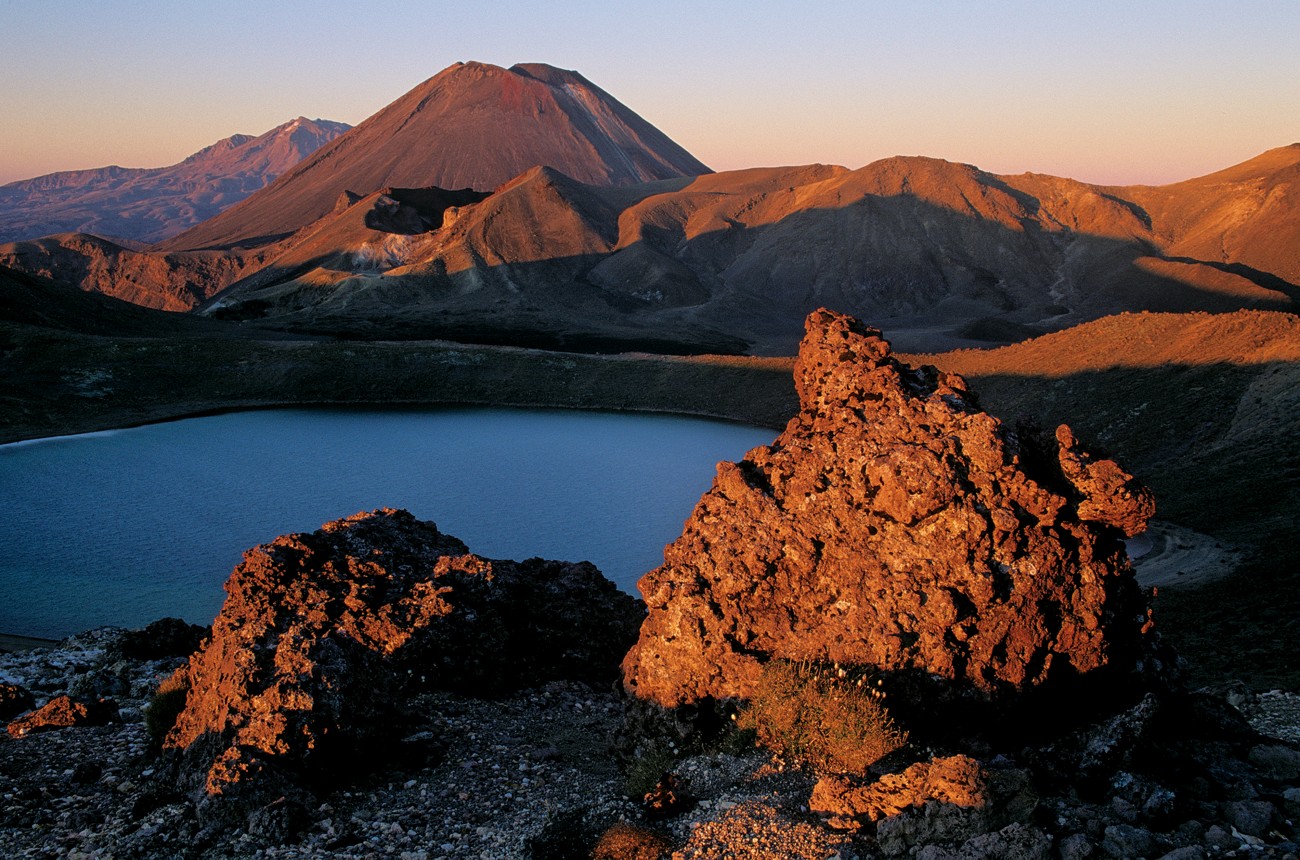 Tongariro is by far the most popular national park in the North Island, attracting tens of thousands of skiers, walkers and trampers every year. The park centres around three active volcanoes: Tongariro, Ngauruhoe and Ruapehu, all of which are considered by local Maori to be sacred ancestors. In 1887 the chief of the local iwi Ngati Tuwharetoa, Horonuku Te Heuheu Tukino IV, gifted the peaks to the government as the basis for the country’s first national park. The mountains continue to play an important spiritual role for both Tuwharetoa and another iwi, Ngati Rangi. In recognition of their strong spiritual links to the volcanoes, in 1993 the park became the first to receive joint World Heritage Status for both its landscape and cultural values.

Needless to say, many multi-day tramps in the park are pos­sible, with the Tongariro Northern Circuit a popular choice. One of the eight Great Walks, the track crosses some of the most colourful and remarkable volcanic topography any­where on the planet, with expansive views and good huts. Be warned, however, that part of the track overlaps with the Ton­gariro Crossing, perhaps the most popular day tramp in New Zealand. On this section you will likely meet a steady stream of people, and it’s far from a ‘wilderness’ experience.

The circuit is exposed to the weather no matter which direc­tion it comes from, a fact which has led to many deaths for ill-equipped walkers. You’ll need to take warm and weatherproof clothing as the weather can change with lethal speed. In winter, skills with an ice axe and crampons may be necessary too.

The track begins from Ngauruhoe Place, some 100 metres from the Whakapapa Visitor Centre. Two options—the upper and lower tracks—lead to the spectacular Taranaki Falls: either takes about an hour. From the falls, a further two-hour tramp crosses exposed terrain to Tama Saddle—the low point between Mts Ngauruhoe and Ruapehu. From Tama Saddle it is possible to take a short side trip to visit the nearby Tama Lakes (one half to one and a half hours return). Past Tama Saddle a further two to three hours tramping down the Waihohonu Stream leads to the new Waihohonu Hut, passing the side track to the historic Waihohonu Hut (built 1903–04) en route.

After leaving Waihohonu Hut, the track climbs a ridge then crosses a beech-clad valley. Beyond, the track traverses barren, undulating terrain, with good views of Mt Ngauruhoe. Oturere Hut also has views of the imposing volcano.

An endless variety of jagged lava flows from the Red Crater eruptions between 2500 and 87,000 years ago cover the glacier-formed Oturere valley, making it a surreal place to visit on a misty day. From here the track begins a steep climb up to the lip of Central Crater, right beside the Emerald Lakes. These are three old explosion pits now filled by highly acidic lakes, all of an arresting blue-green colour that change hue according to the light and time of day.

The Tongariro Northern Circuit heads up Red Crater, but many trampers opt to spend a night at Ketetahi Hut. Desolate Central Crater provides flat, easy walking, ending with a zigzag ascent to a basin occupied by the daz­zling Blue Lake. After skirting the western shores of Blue Lake, the track descends into a rocky gully, and zigzags down to Ketetahi Hut. The hut has commanding views over Lake Rotoaira, Mt Pihanga, Lake Taupo and the Kaimanawa mountains.

Back at the Emerald Lakes, the circuit resumes, beginning a climb up the scoria slopes of the colourful Red Crater. Loose rock can make this a tough climb. Above Red Crater lies Pt 1886m, the highest point on the circuit and an outstanding viewpoint. Ngauruhoe rises starkly from South Crater, with Ruapehu partially hidden behind. A poled side trail leads to the summit of Tongariro (1967 m), lowest of the three major peaks in the park. From Pt 1886m, there is a steady descent along a ridge to South Crater. Poles lead across the flat expanse of South Crater ending on a lip overlooking the Mangatepopo Valley. From the lip, there’s the option of climbing Ngauruhoe (2287 m), an energy-sapping but rewarding scramble up steep scree slopes. Oth­erwise head downhill on a series of sharp zigzags that end beside the bubbling Mangatepopo Stream. Old lava flows originating from Mt Ngauruhoe dominate the valley. Toilets exist near the Soda Springs. Mangatepopo Hut lies just 20 minutes from the Mangatepopo roadend.

Many people choose to end their tramp at Mangatepopo, and do not complete the full circuit back to Whakapapa using this track, which is eroded in places and crosses several streams. Af­ter leaving Mangatepopo Hut, head towards the Mangatepopo Road. The track to Whakapapa branches off after five minutes. Initially the track rounds the western slopes of Pukekaikiore, thought to be one of the older vents of the Tongariro complex, then passes Pukeonake, a low scoria cone. Views of Mt Ruapehu open up as you approach Whakapapa.