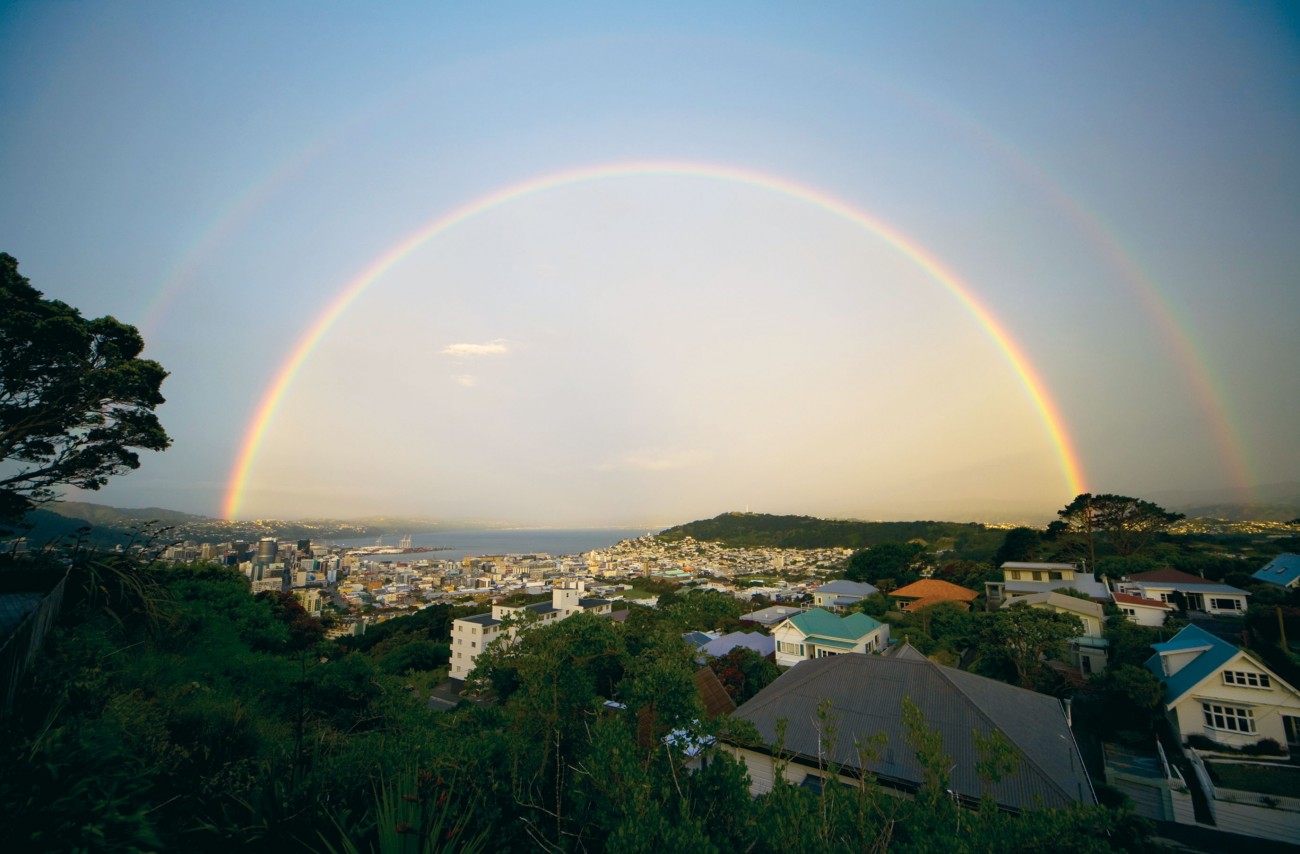 The perfect curve of the rainbow sug­gested to ancient peoples that it must be the work of a god, while its shape suggested its use as a weapon. One of the Hindu myths from the Rig Veda, created more than 3000 years ago, tells how Indra, the god of thun­der and war, shoots arrows of lightning from a rainbow to kill the demon serpent Asura Vrtra. In Scandinavia, the Saami thunder god, Tiermes, also uses the rainbow to fire arrows at evil spirits.

In the Illiad, the Greek poet Homer’s epic account of the Trojan War that was written around 2700 years ago, Zeus stretches a rainbow across the sky as a portent of war. The rainbow was also a sign of the presence of the goddess Iris, who appears throughout the Illiad as a messenger, variously answer­ing Achilles’ prayers and Zeus’s commands.

Rainbows often connected gods and hu­mans. In Norse mythology, Bifrost, a flam­ing rainbow bridge, links the land of Asgard, home of the gods, to Midgard, the world of the humans. Bifrost was guarded by Heim­dall, a god who could hear wool growing on a sheep’s back and see the least movement a hundred leagues away, day or night. But he could not save the bridge when the apoca­lyptic final battle between gods, giants and demons came and Bifrost shattered under the weight of the combatants.

In many cultures, the rainbow is linked with snakes. In Estonian folklore, a rainbow serpent sucks up water from rivers, lakes and seas and then rains it back to Earth. In Abo­riginal Dreamtime, the ancestor Rainbow Python also brings life-giving rain. In the Argentine Chaco, however, the Toba Indian rainbow serpent Wosa’k stops the rain, appearing only when he is angry at humans.

As well as life-giving rains, rainbows were sometimes thought to bring pestilence. When smallpox reached Australia, the Abo­riginal people near Melbourne called the disease the “scale of Mindi”, their Rainbow Serpent. Zulus in South Africa also believed that if the rainbow touched someone, it in­fected them with disease. The Igbo people of Nigeria thought that where the double-headed rainbow python touches the ground, an important person will soon die.

Pointing at rainbows was considered to be dangerous. In Hungary, it was thought that the pointing finger would wither, while in China, the entire offending hand was ex­pected to ulcerate. In Central America, the Sumu Indians kept their children indoors to avoid the risk that they would inadvertently point at a brightly coloured rainbow. Point­ing at people has often caused offence and could be mistaken for delivering a curse (we still tell children that it’s rude to point), so who would want to offend a powerful god?

Hungarians believed that walking un­der a rainbow could provoke a sex change. Nearby, in Bohemia, this applied only to girls under seven.

When two bows appeared together, the Chinese believed that the brighter, primary bow was male and the fainter, secondary bow was female. In New Zealand, a simi­lar belief was held by the Tuhoe, although with the sexes reversed. They also regarded whirlwinds as children of the rainbows.

For Christians, the primary bow was and is God’s covenant that he will not destroy the world by flood a second time, and in medi­eval Europe the secondary bow was seen as the Devil’s work a failed attempt to copy God’s glory that wasn’t just fainter but had the colours in the wrong order as wel.

Sir Isaac Newton described the phys­ics of rainbows in the 17th century when he showed that white light broke up into its constituent colours when it fell obliquely onto the surface of a glass prism.

Sunlight striking the curved side of a rain­drop changes direction as it enters the drop. The extent to which it does so depends on the wavelength and therefore the colour of the light. Shorter wavelength light, such as blue, bends more than longer wavelength light, such as red. Travelling in slightly differ­ent directions, the light waves spread further apart as they cross the raindrop. They then reflect off the back surface of the drop, cross the drop again, and exit the water back into the air. As the light crosses the water surface, it changes direction again, separating the colours even further.

Because of this separation, the coloured light that reaches the eye of an observer comes from different raindrops. The red light comes from raindrops a little higher in the sky, while blue light comes from drops that are lower down. The raindrops, of course, are falling, so that each is quickly replaced by a raindrop from above, creating the illu­sion of a stationary rainbow caught in a fall­ing curtain of rain.

The secondary bow, which is not always seen, is formed by light that reflects twice off the inside wall of the raindrop. Conse­quently, it is fainter, as each time the light reflects off the inside surface of the drop, a fraction of the light escapes out into the air. The colours are reversed because of the second reflection, and the secondary bow is also higher, making an angle of about 51 de­grees with the incoming sunlight, compared to 42 degrees for the primary bow.

The interesting consequence of this pre­cise angle of sunlight is that two people side by side do not actually see the same rain­bow they see their own personal rainbow, shifted slightly to one side.