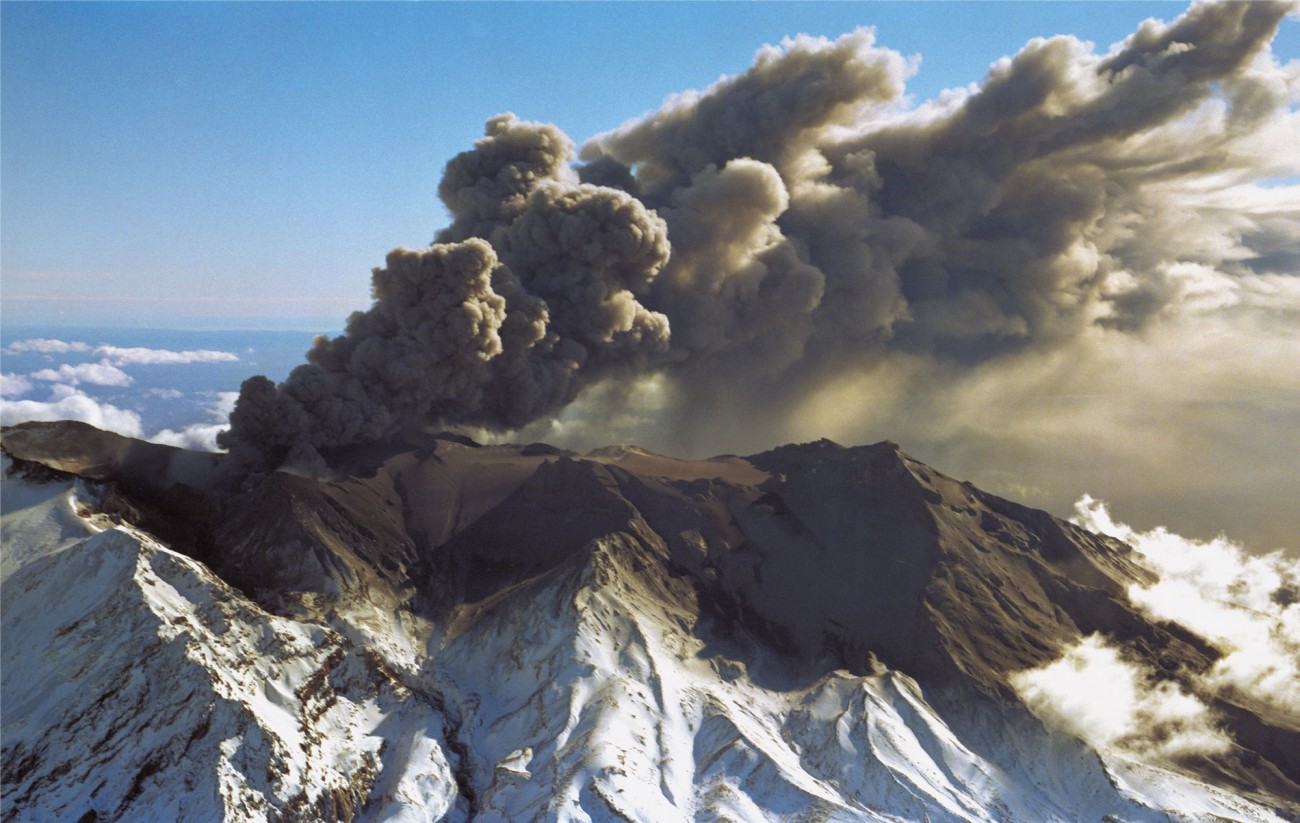 Institute of Geological and Nuclear Sciences

Writing in the sixth century AD, Gregory, Bishop of Tours, recorded in his Historia Francorum (The His­tory of the Franks) a dramatic story of the weather intervening in the lives of princes.

In AD 536 there were three rulers of Frankish kingdoms: Childebert, the king of Paris; his brother Lothar, the king of Soissons; and the broth­ers’ nephew Theudebert, the king of Metz. Childebert and Theudebert joined forces and set out with a large army to attack Lothar, who retreated to a fortified position on a hilltop. Hearing of the imminent battle, Queen Clotild, mother of Childebert and Lothar, went to the tomb of Saint Martin and prayed through the night for divine intervention to prevent her sons fighting.

The next morning, before battle preparations had been completed, a terrific thunderstorm laid waste to the aggressors’ camp. Tents were blown down, gear was scattered and horses were driven away by hail and lightning. The hailstones were so large and pelted down with such persistence that many sol­diers, including the two kings, were cut by them, driven to the ground and forced to shelter beneath their shields. Meanwhile, Lothar and his army were untouched by the thun­derstorm. Accepting the event as divine chastisement, Childebert and Theudebert did penance to God,begging forgiveness for attacking their own kith and kin, then sued for peace and concord, which Lothar granted. Lothar’s dynasty prospered, leading eventually to the unification of France and the rule of Charle­magne.

In fact, weather had a significant impact worldwide at this time and, according to David Keys in his fascinating book Catastrophe, may well have changed the course of history. Major droughts and famines are mentioned in records of the Roman and Chinese Empires, and palaeocli­matic records provide confirmation.

One Chinese chronicle, BeiShi, records that in the central Chinese province of Xi’an seven or eight out of every ten people died and the survivors had to eat the corpses. Across the Atlantic, in the Americas, palaeoclimatic data attest to a pro­longed and severe drought. Studies of both bristlecone pine and foxtail pine tree rings in California show a sharp reduction in tree growth consistent with an intense multi­decadal drought. Similar findings have come from tree ring studies in Chile and Argentina. Oxygen-isotope analysis of the shells of freshwater snails found in sediment of a lake in the Yucatan reveal the drought to have been the worst in a thousand years. Analysis of a core taken from an alpine glacier in Peru has shown it to have been the most intense and long-lasting drought recorded.

Archaeologists are now linking this drought to the fall of Teotihua­can, one of the great civilizations of the ancient Americas. With an estimated population of possibly 200,000, the city of Teotihuacan would have been the sixth-largest metropolis in the world at the time. It dominated sixth-century Mexico and Guatemala and traded as far away as present-day New Mexico. Teotihuacan’s largest building, known as the Pyramid of the Sun but probably dedicated to the rain god Tlaloc, was almost as large as the pyramid of Cheops, in Egypt.

Revised dating of the fall of the city now places it several decades after the start of the drought. A study of more than 150 skeletons from a working-class cemetery on the edge of the city shows evidence of a de­cline in health as a drought-induced famine took hold. The death rate for under-25s seems to have doubled, with almost 70 per cent of the work­ing-class population dying before that age. Moreover, the death rate for the age group 15–24 trebled from 8.3 to 27 per cent of all deaths.

Archaeological excavations have shown that the end came violently for Teotihuacan. Most of the pal­aces and temples were burnt to the ground, although the large majority of the residential buildings were not. Religious statues were thrown down from the pyramids and smashed to pieces. One 60-cm-high statue of a goddess has been reassembled from pieces scattered over an area of 860 sq m. Dismembered skeletons surrounded by broken jade and shell jewellery found in the ruins of one of the palaces have been interpreted as the slaughtered remains of priests or rulers. All this is evidence of internal insurrection and the collapse of the state religion based around a rain god who had failed to end the drought.

Great changes were occurring on the other side of the world also. In about AD 550, the Avars, who had ruled the Mongolian steppes since defeating the Huns about 400 years earlier, were overthrown by their vassals, the Turks. David Keys blames the same drought for the Avars’ defeat. Living on grasslands, the Avars had an economy based around the horse, from which they got meat, milk, yoghurt and alcohol (by fermenting mares’ milk), as well as military power. By contrast, the Turks had a more mixed economy, built around cattle, goats, sheep, horses, hunter-gathering activities in the forests and some mining. Horses have a digestive system that is much less efficient than that of cattle. They digest around 25 per cent of the pro­tein they consume, whereas cattle digest around 75 per cent. Hence, the drought hit the horses, and therefore the Avars, much harder than it did the Turks and their cattle. Consequently, the loss of life among the Avars was much greater and the balance of power shifted.

After their defeat, the Avar survi­vors migrated westward, conquer­ing and subjugating the peoples in their path, including the Slavs, before invading the Eastern Roman Empire. The Avars and Slavs enjoyed great success fighting the Romans, winning many battles and carving off large territories over which the Romans never regained control. One of the main reasons the Romans fared so badly was that in the wake of the drought the empire had been ravaged by plague. The population of Constantinople was reduced from about half a million to around 100,000, and other cities were hit as hard. The armies the Romans put in the field were shadows of what they had managed in the past, and the tax base that paid for them had also been decimated.

The arrival of the plague soon after the drought may not have been a coincidence. David Keys argues convincingly that its spread out of central Africa, where it was en­demic, was actually caused by the drought, in the following sequence of events. First the drought caused vegetation to die back, thus reduc­ing the food supply of the rodents that carried the plague. Next, the rodent population fell sharply, as did the populations of rodent predators. When the rains finally returned, the rodents bred much faster than their predators. Then the rodents ex­hausted their local food supply and migrated into surrounding territory, taking the plague with them. Once the plague reached the coast it was carried north to Alexandria along the trade routes by boats carrying ivory for the Roman Empire. From there it raced across Europe and Asia, car­rying away far more lives than the drought itself had.

What caused the drought in the first place? David Keys has an answer for that too—an enormous volcanic eruption near the site of the famous 1883 Krakatoa eruption, in Indonesia. Evidence of a major event in the sixth century has been found in ice cores taken from both the Greenland and Antarctic ice caps. Chinese chronicles record the sound of a loud explosion coming from the direction of Indonesia, while a local chronicle relates the story of an enormous eruption splitting apart the islands of Java and Sumatra.

When a major eruption is directed upwards (as opposed to sideways, which was the case with Mt St Helens in 1980), it can lift enough material into the stratosphere to affect global climate. Although much of the ash and dust falls to earth within months, sulphate aerosols can stay in the stratosphere for years. If the eruption occurs between latitudes 20°N and 20°S, the aerosols can spread over both hemispheres as they migrate slowly polewards. Aerosols block some of the sun’s incoming radiation but do not trap Earth’s outgoing long-wave radiation, resulting in a net cooling of the air. Cooler air is not able to hold as much water vapour as warm air, so cannot produce as much rain. Furthermore, weaker sunlight is less able to initiate showers and thunderstorms by warming the land. Similarly, the various monsoon rains on the different continents would be much reduced by weaker sunlight.

New Zealand has had more than its share of volcanic erup­tions that probably had an impact on the world’s weather in earlier times. Most famously, Taupe’s titanic outburst in AD 186 is considered to have been one of the largest erup­tions in the world in the last two or three millennia.

Back in Issue 41 (January–March 1999), we presented preliminary results from the JOIDES Resolution’s deep-sea drilling off New Zealand. Over 600 km east of Gisborne, cores recovered from sediments below the sea floor revealed the presence of 140 layers of volcanic ash which had accumulated over the past 12 million years. The deepest layer was almost a metre deep—a huge amount of ash to be so far east of its eruptive centre, and indicative of a massive event. Indeed, all the ash in these layers was acidic and rhyolitic in nature, characteristics usually associ­ated with huge explosive eruptions. These would have occurred along the Coromandel and Kaimai Ranges and, during the last two million years, in the Rotorua–Taupo zone. Over the last 22,000 years, 80 cubic km of magma has been ejected from the Okataina Volcanic Centre, in the Tarawera area. By comparison, the gentler andesitic eruptions of Ru­apehu and Egmont/Taranaki would have been mere firecrackers.

The June 1991 eruption in the Philippines of Mt Pinatubo—the second-largest eruption of last cen­tury—injected 20 million tonnes of sulphur dioxide into the stratosphere, depressing global temperatures by 0.5° C over the next two years. Al­though eruptions in the tropics more readily affect climates worldwide than do eruptions at higher latitudes, many New Zealand eruptions have been so large that they would have had widespread effects. How we and the world at large might deal with another Taupo is an issue yet to be faced. The climatic consequences of a giant eruption could last for years and affect more people than the eruption itself.