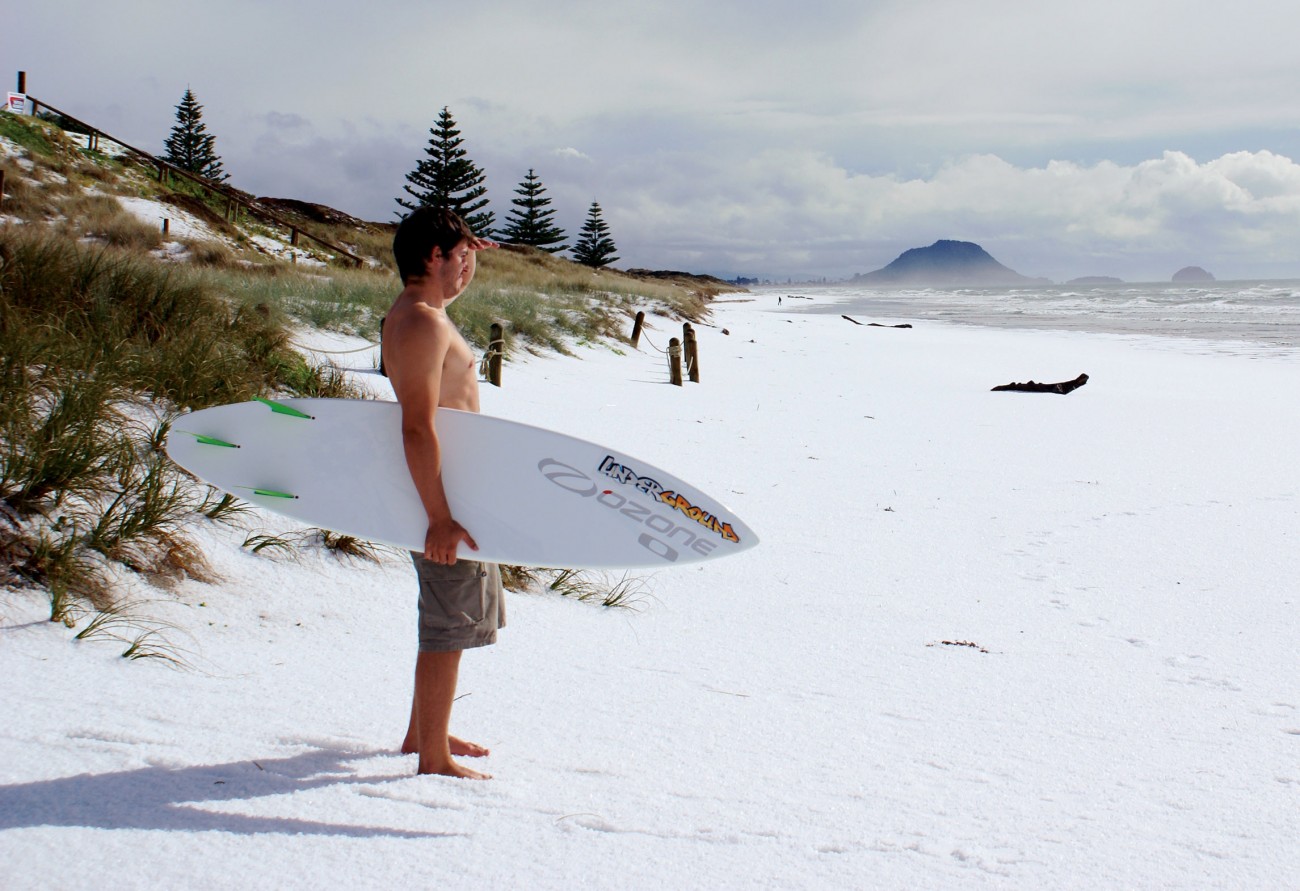 On Saturday 9 May, a southerly outbreak swept Antarctic air onto the South Island, bringing snow to low levels. The cold out­break reached the North Island the next day then stalled, its escape blocked by a station­ary anticyclone east of the country. The cold air formed a giant low 2000 km in diameter, centred over New Zealand. Like spokes of a wheel, fronts and troughs rotated around the low centre, resulting in alternating bands of thunder, rain and hail, with brief clearances.

It was a severe and unusual storm, but not without precedent for this time of year. The sea surface in May is still relatively warm, which makes ideal conditions for thunder­storms to form. The warm sea heated the cold air, making it very buoyant so that it rose rap­idly. As it did so, it encountered lower atmos­pheric pressure and so expanded, which then lowered its temperature. This cooling caused water vapour in the air to condense and form cloud droplets, which then released heat into the rising air, increasing its buoyancy again.

If the air is cold enough and the sea warm enough, this buoyancy can drive air up as fast as 100 km/h or more. The strong updraft inside the cloud is crucial to the formation of hail because it quickly lifts cloud droplets to altitudes where the temperature is well below freezing. Initially the droplets remain liquid even though their temperature may be as low as minus 15ºC. But once a droplet of this super-cooled water touches an ice crys­tal, it freezes onto it. It then grows more as it continues to bump into other super-cooled liquid droplets. Air trapped between the droplets as they freeze gives hail its typical white appearance.

If the updrafts are very strong, hail can grow very large by colliding with raindrops. These raindrops wrap around the hailstone as they freeze, giving the hail a clearer, glassy appearance. The largest hailstone recorded in New Zealand was the size of a tennis ball, the result of an updraft of around 150 km/h.

On Monday 11 May, it was the quantity of hail rather than its size that caused trouble along a narrow strip of coastal land southeast of Tauranga. Here, the hailstones covered the ground many centimetres deep, disrupting traffic, blocking drains and gutters and dam­aging buildings. In some places the hail was piled up into drifts more than 20 cm deep.

Although hail fell over many other parts of the North Island that day, much more fell here than anywhere else. The difference in Tau­ranga was that the core of the cumulonimbus cloud responsible for the hail stayed over the ocean, benefiting from an abundant supply of heat and water vapour just offshore and drop­ping its hail on the beach and nearby land.

But the dramatic weather was not lim­ited to hail storms. The strong updrafts in the cumulonimbus clouds also gave rise to thousands of lightning strikes over the top half of the North Island and adjacent seas. Lightning occurs when small ice particles or water droplets end up with positive charge and large ones with negative charge. Strong updrafts rapidly carry the smaller positive particles high up in the cloud, leaving the larger negative particles below. When the dif­ferences between these charges are enough to overcome the air’s natural insulation, a bolt of lightning occurs.

The strong vertical motion inside the cu­mulonimbus clouds was also responsible for a mini-tornado, which damaged properties in Warkworth, and a waterspout seen off Tauranga. This is what happens when rap­idly rising air in the centre of the cumulonim­bus spins in a tighter vortex, causing strong winds in the process, much like a spinning ice skater gaining speed by pulling her arms close to her body.

The prolonged nature of the cold weather over New Zealand was caused by an intense anticyclone east of the country. Although its centre was 2500 km away, it was very large­ more than 2000 km in diameter—and station­ary for days, stopping the eastward movement of a depression affecting New Zealand. A sta­tionary anticyclone that lasts for five days or more is referred to as a “blocking high”, and the region southeast of New Zealand is the most common location for blocking in the en­tire southern Hemisphere.

The effects of a blocking high on the weather are quite dramatic. Immediately west of the high there will be northerly winds blowing warm air towards the pole, while further west, beyond the fronts and lows, cold southerlies will prevail. How the weather affects New Zealand depends on the proximity of that high. In the third week of May this year, another southerly brought snow to low levels of eastern areas of both islands, while a blocking high lay out to the east. Then, in the second week of June, a slow-moving high was much closer to east­ern New Zealand, resulting in a long period of mild northerlies and rain.

New Zealand isn’t the only country endur­ing unusual weather. During the last northern Hemisphere winter, a number of places in the United States and Europe had the snowiest conditions in 10 or 20 years, which climate change sceptics pointed to as evidence for their argument. However, for each of these cold areas, there were other places on the same continent that experienced warmer­than-average conditions. Globally, 2008 was the tenth-warmest year since records began.

And disturbing evidence of warming con­tinues to accumulate in polar regions. The Arctic sea ice is melting faster than normal and its area is now less than that of the record-low ice year of 2007 (at the same stage of the melt cycle). Meanwhile, in the Antarctic, an­other large chunk of the Wilkins Ice Shelf has recently broken away, weakened by warmer­than-average sea temperatures.

The atmosphere and ocean computer models are now predicting the onset of an El Niño in the next few months. Paradoxically, the effect tends to bring cooler-than-average summers to New Zealand but will boost global average temperature by as much as half a degree—which means that the global average temperature for 2009 should even exceed that of 2008.