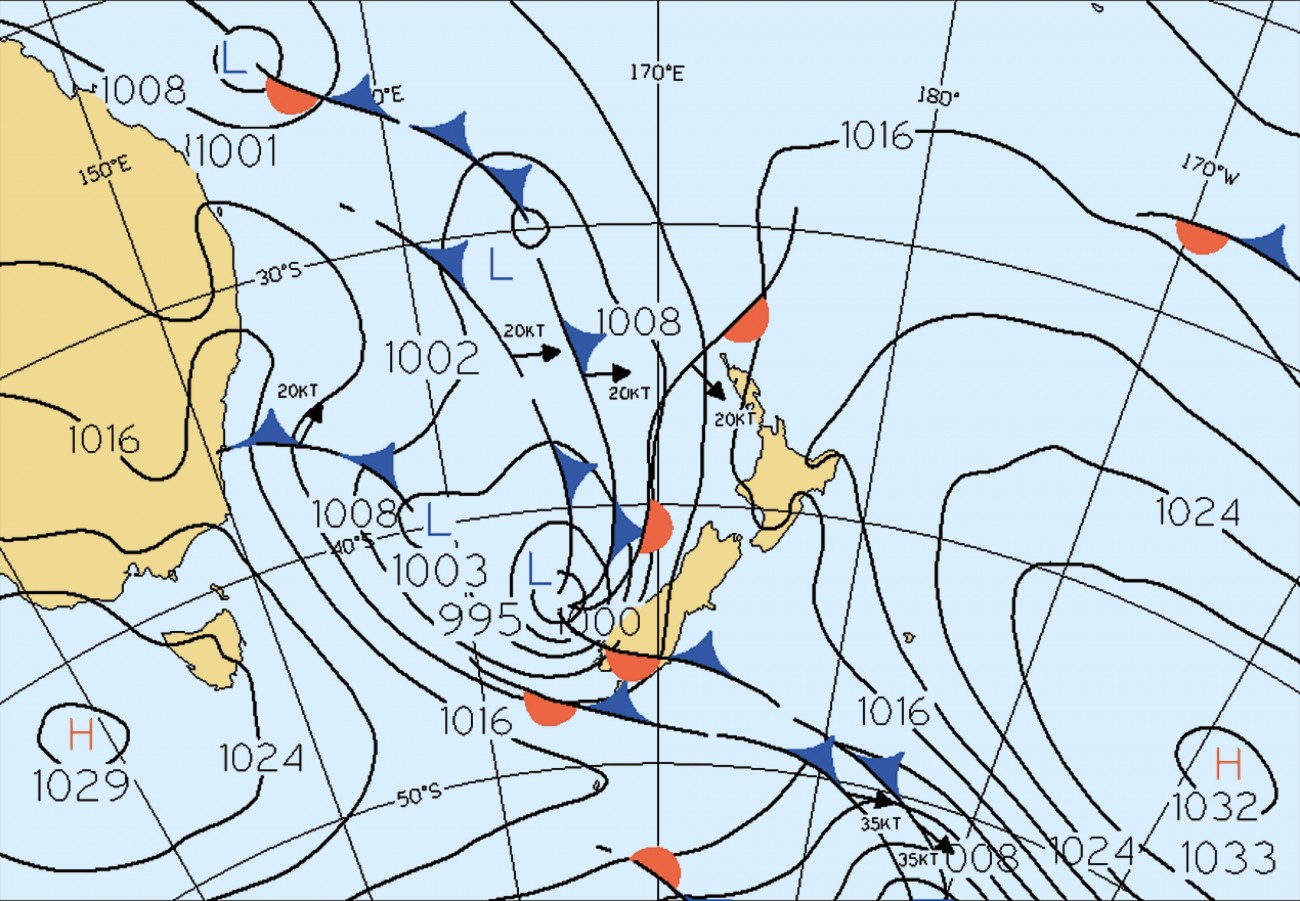 Air from near the tropics is the raw material for this factory, which contains large amounts of water vapour. The physics of water is such that air with a temperature of around 25°C can hold three times as much water vapour as air with a temperature of 10°C. This is why most floods in New Zealand involve an air stream originating in or near the tropics.

The Southern Alps are oriented south­west to north-east, so a warm airstream ap­proaching from the north or north-west en­counters a long solid barrier and is forced to rise. Air pressure at the crest of the Alps is around two-thirds sea level pressure. As the rising air encounters lower surrounding pressure it expands, and this causes its tem­perature to fall. As the air cools, some of its water vapour condenses to liquid, forming clouds and then rain. The rapid upward mo­tion caused by the mountains increases the amount of rain a weather system produces more than tenfold.

A good example of this type of situation occurred during the first two days of March this year when 248 mm of rain fell over Fiordland’s Homer tunnel in 48 hours and more than 200 mm fell in 24 hours over the foothills of Westland. Significant rain also spilled over the main divide with 80 mm to 100 mm falling into the headwaters of rivers running into the lakes that feed the South Is­land’s major hydroelectric power schemes.

Over a 100 mm of rain also fell over the Kahurangi National Park in north-west Nel­son, the Tararua Range, Mt Taranaki and the hills of Bay of Plenty.

The total area affected by heavy rain in this storm was many thousands of square kilometres although not all of it had as much as 200 mm. Still, the total amount of water delivered to New Zealand by this storm was the best part of a thousand million tonnes.

However, to get into really big numbers, we need to take a microscopic view of what is happening. When the rising air has cooled enough to reach 100 per cent humidity, the water vapour still needs a little help to start condensing. This comes in the form of mi­croscopic particles in the air known as con­densation nuclei. These can be tiny bits of dust or soot, but in a maritime country like New Zealand around half of them are de­rived from biological activity in the ocean.

Tiny plants called phytoplankton contain a chemical called dimethylsulfoniopropion­ate (DMSP) to prevent the osmosis of salt water through their cell walls. When tiny animals, known as zooplankton, graze these plants, some DMSP is released into the wa­ter where it reacts to form dimethylsulfide (DMS).

When waves break, bubbles briefly form on the sea surface, then burst, flicking tiny droplets into the sky where they evaporate, leaving DMS in the air. It is this DMS that causes the characteristic smell we associate with the beach. In the air, DMS oxidises to form four different chemicals, three of which act as cloud condensation nuclei.

Incidentally, back in the ocean, research­ers have recently shown that fish will navi­gate up increasing gradients of DMSP to find food – either the zooplankton themselves, or the fish that feed on it.

An average size for a cloud droplet is about five micron. Doing a rough calcula­tion, the thousand million tonnes of water that fell over New Zealand would have been made up of a trillion trillion cloud droplets combined with as many condensation nu­clei dissolved inside.

However, the rainfall process is more complicated than just combining cloud drop­lets. In our part of the world, most raindrops originate from ice particles which grow, initially, by water vapour depositing directly onto them, then later by collision with cloud droplets as they fall and melt.

Ice particles do not form on condensa­tion nuclei but on different particles known as freezing nuclei, which mimic the shape of an ice crystal. Freezing nuclei are typically tiny particles of clay or bacteria picked up by the wind at the Earth’s surface and mixed through the depth of the atmosphere. A study published in Science in February found over a hundred bacterial ice nuclei per li­tre of melted snow in France and Montana, and about a twentieth this concentration in Antarctic snow. Interestingly, it turns out that in most cases, the bacteria come from plant pathogens and are still alive after their trip through the sky.

So the next time New Zealand gets thumped with a billion tonnes of rain, think of it as trillions of bits of bacteria parachuting back to earth inside their own raindrops.