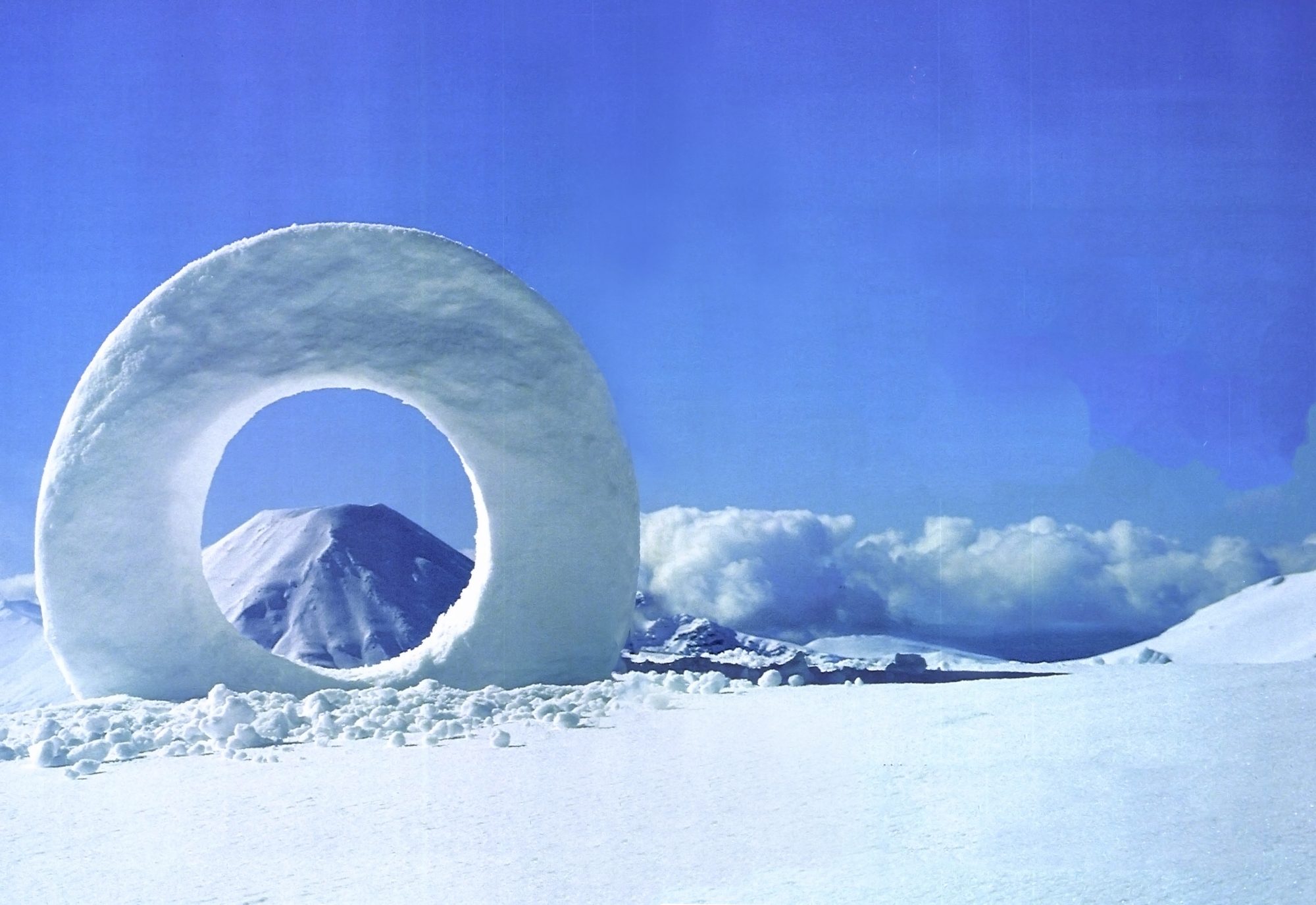 A man bends attentively over a sheaf of newly cut toetoe, lashing the flowerheads together to form an arch. At his back the evening sun glints off an unusually subdued ocean swell as it folds endlessly into the warm Karekare sand.

The beach, enlivened at its northern end by surfers, curves south toward the engulfing haze of Whatipu. Now and then a gull flicks past. We are on Auckland’s primeval west coast, a vast studio without walls that enables Martin Hill, 49, to practise his art—environmental sculpture.

Ever since Theodore Rousseau and others took their easels into the forest of Fontainebleau in the mid-nineteenth century, thus changing forever the painting of landscapes, western artists have hankered after a closer contact with the earth. Environmental artists such as Hill can be seen as the latest twist to that landscape tradition.

You won’t often come across their work in galleries. In Hill’s case, you won’t even fmd it at the place it was made—unless you are quick. Ice melts, leaves decay, sand returns to the sea. The undoing is part of the art, says Hill.

“I’m interested in the processes of change, transformation and transience,” he says. “I’m fascinated by nature’s cyclical systems where everything is reused or fed back into the never-ending ecological loop.”

The materials to hand determine the form and content of Hill’s  sculptures. In Australia he was drawn to the deep colour of gum bark. In the Rocky Mountains, it was aspen leaves undergoing their fall colour change (left). Here in New Zealand, the London-born Hill reworks archetypal shapes spheres, spirals, circles often using the common materials of coastal life: sand, feathers, rocks, shells.

Ironically, though his sculptural tools are low-tech at Karekare nothing more than a pocketknife—Hill relies on advanced technol­ogy photography to record his ephemeral work.

By profession a graphic designer, Hill is also a climbing enthusiast, and in the spring of 1995 he hit on what in retrospect was an obvious way of marrying climbing and making things outdoors. He began making things high up, outdoors.

An early project was a sand sculpture on a rock pinnacle over­looking Whanganui Bay on Lake Taupo . The entire journey, including the climb a long abseil down, was documented as part of the artistic process.

“That night a storm raged,” says Hill. “I thought of the sand washing down the face back to the beach where I had collected it. When that happens the work will be complete.”

Hill’s most ambitious project is what he calls The Fine Line—a proposal to climb 12 high points around the world where he will create artworks using found materi­als. The planned climbs, forming a symbolic line circling the earth, are intended both to satisfy the moun­taineer’s urge to tackle new and extreme locations and to draw attention to the state of the earth.

“There’s a fine line between safety and danger when climbing,” says Hill. “It requires vigilance and concentration. Earth’s ecological systems are in danger because we have failed to be vigilant in protect­ing them.”

Hill’s working method also involves artistic risks. A reed sculp­ture he began building in shallow water shortly after our arrival at Karekare was destroyed prematurely by a fluke wave. Even the toetoe he stooped over for the best part of an hour proved intractable and had to be abandoned.

When, with a glance at surf tinted orange by the brilliantly setting sun, I suggest helpfully that it would be hard to imagine a better place not to succeed, he takes exception to the word. He tries to work in sympathy with nature, he tells me, and to construct sculptures that “belong” to a place. That means learning about what is there and how it works, largely by trial and error. “Obviously, toetoe doesn’t like being bent into circles,” he says.

Environmental art has come a long way from the days of earth works, when Robert Smithson and others celebrated the status quo by imposing their will on the land using massive bulldozers. Now, artists like Hill try to respect the integrity of a site, seeing their work as a catalyst for renewing the frayed bond between humans and nature.

They argue that in attempting this they are heirs to a long tradition: that the earliest artworks were not created as isolated products but for use in rituals that spiritually balanced the needs of Earth and all her inhabitants.

Looking at the remains of the toetoe on the black sand, at the farewell kick of a burrowing crab and the rivulets of sucked tide, I realise that for five hours we have both been immersed in nature’s exquisite detail, thrown into focus by Hill’s art.

Leaving the dismantled grass, he strides out for a swim, plunging into a foaming wave. Art and nature; artist and surroundings. Merged. Indistinguishable.