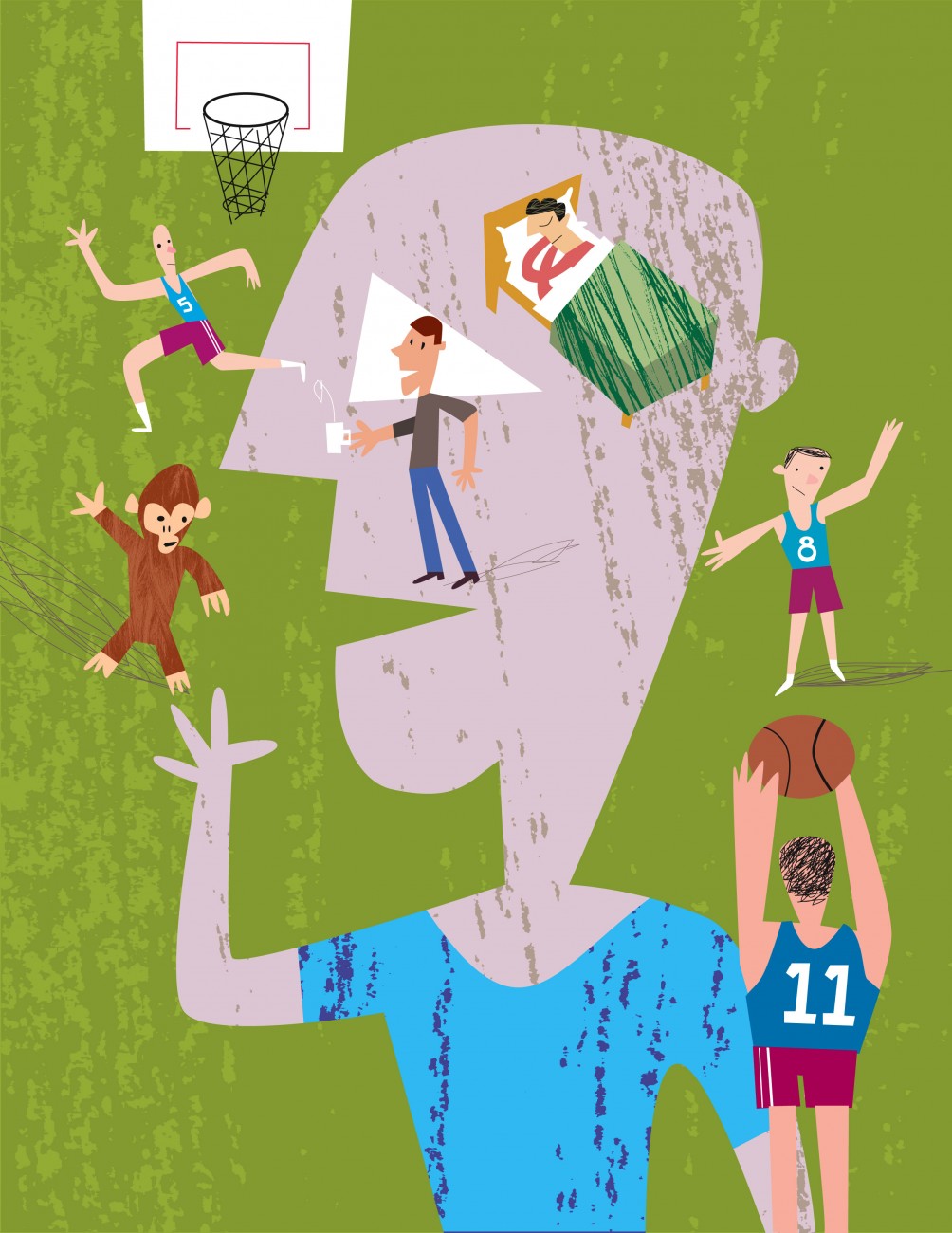 We live in a world of bewildering complexity, and there is generally far too much going on around us for us to be aware of everything­ the sights, sounds, smells, tastes and touches that constantly harass our senses. Our brains have therefore evolved to select some aspects of the world for mental processing, and ig­nore the rest. That selection process is what we call attention.

Its selective nature is easily demonstrated. In one famous example, people are shown a moving clip of a basketball game, and are gen­erally so intent on watching the players that they fail to notice a gorilla that has wandered onto the court. If you play messages via earphones simultaneously into each ear and ask people to listen to one of them, they generally fail to pick up any information from the other, even though it’s equally loud. This proves that atten­tion can be operated internally, by the mind, and not simply by orienting the ears. Visual at­tention, however, generally depends on where the eyes are looking. Even so, it is possible to look straight ahead and yet pay attention to events out of the corner of the eye a device that can be used by rugby or netball players to trick the opposition. Or by school teachers, anxious to detect mischief makers.

Nature has equipped us with automatic mechanisms to capture events that might be important to survival. Loud noises, sudden movements, brilliant flashes of light these all divert us from what we are doing, in case they signal danger. So does extreme pain. Alarm systems are typically loud and jarring, although we may also be tuned to more subtle events. A mother may be especially alert to the sound of her baby crying even from a distance, and all of us are sensitised to the sound of our own names being spoken, even if whispered. In Shakespeare’s Richard II, John of Gaunt ob­serves “…they say the tongues of dying men enforce attention, like deep harmony”.

However, we are not slaves to the environ­ment; attention can be controlled voluntarily, as when we choose to read a book, listen to a lecture or a piece of music, or solve a cross­word puzzle. To a degree, then, we can filter out most environmental distractions, although not all. In his poem The Canonization, the poet John Donne famously exclaimed, “For God’s sake hold thy tongue, and let me love.” Atten­tion is not always directed to the external world. We can beam it inwards, as when we are lost in thought or reverie.

Attention requires a fine balance between concentration on the task at hand and aware­ness of the environment. We cannot be so in­tent on solving a Sudoku puzzle that we fail to observe the conflagration around us, nor can we be so easily distracted that we fail to com­plete any task requiring sustained concentra­tion. Sometimes the balance is disturbed, as in some cases of brain injury, or in what is called attention deficit disorder. In general, boys seem more prone to this than girls. In a hunter-gath­erer society, it was probably the males who did the hunting, and this required constant atten­tion to danger and opportunity.

The human brain is curiously asymmetrical in the way it controls attention. The left brain attends to the right side of space, the right to both sides, albeit with some bias towards the left. Damage to the right side may therefore cause the patient to lose awareness of events on the left, a phenomenon known as hemineglect. The patient may eat from only the right side of the plate, dress only the right side of the body, ignore those who address them from the left, and are easily beaten at chess by an attack from the left flank. A famous example is the German artist Lovis Corinth (1858–1925), who suffered a right-brain stroke in 1911 but continued to draw and paint for the next 14 years—much of his work shows a neglect of the left side.

Just why the brain should function in this asymmetrical way is not clear. Perhaps it’s be­cause in most of us the left side of the brain is largely taken up with language, and so loses some of its capacity to direct attention to space. Left-brain damage seldom results in neglect of the right side, or does so only transiently, and there is no evidence that non­human animals show a similar asymmetry. We are the lopsided ape.