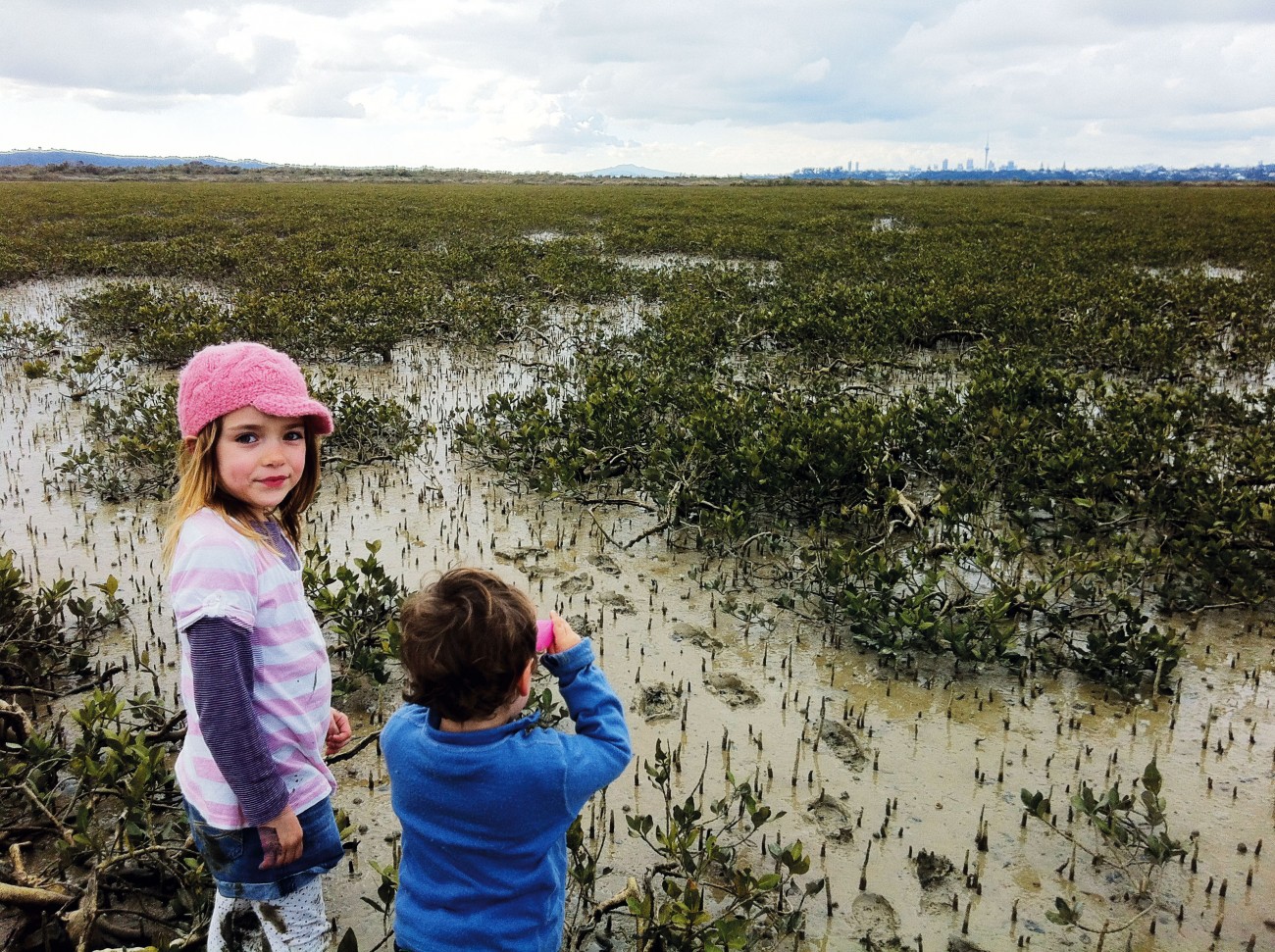 For several years, I lived at Muriwai Beach on Auckland’s ironsand coast and commuted to the city along the North Western Motorway. On the stretch between Rosebank and Point Chevalier, the motorway runs four kilometres along a causeway that appears to span a low-lying island of scrub, crossing a bridge over an estuary outflow before beginning its ceremonial sweep into the big smoke.

On windless days, the harbour shallows were a pool of mercury that flooded the mangroves at the island’s edge. During storms, the chop seethed and raged at the road’s fringe, driving salt spray across the passing traffic. It was part of the journey I treas­ured—a brief brush with nature, a long view to the harbour bridge, a wink of the Waitemata early in the morning. But if someone had told me that this was a marine reserve, I would never have believed them. It’s too close to the influence of industry and urban sprawl, quite apart from the emissions of 100,000 vehicles using this stretch of highway each day.

Photographer Darryl Torckler convinced me that this backwater was worthy of attention. Alternatively, I could have listened to my children, both of them mud enthusiasts who enjoy nothing more than fossicking among the roots of mangroves. So I took my kids with me to reconnoitre.

Pollen Island is not well set up for visitors. To reach it, one has to sidle down a cycleway, climb over a berm, slither under the concrete spans of the Whau River motorway bridge and clamber over basalt boulders just to reach the almost impen­etrable grip of mangroves. On our first attempt, my budding ecologists and I took a wrong turn and ended up beside the motorway, from where we were immediately whisked away in patrol cars—the police officers had never heard of Pollen Island and didn’t seem to share our enthusiasm to reach it.

We embarked on a second, better-informed attempt with Kennedy Warne, who wrote the feature The Wilderness Next Door in this issue. To the background thunder of traffic, we wandered among a meadow of Salicornia blushing rouge in a clearing of mangroves, and stopped to watch the ‘slow traffic’—the crabs that emerge by the hundreds from their burrows when a visitor is willing to wait, or the hermits in cone shells that animate slowly across the mud, leaving behind them a pattern-language of madly looping trails.

After a while, we ceased to notice the traffic, and the many little miracles of this marine reserve became evident. The children squatted on their haunches to watch the cast of this miniature theatre of mud, and peered through tiny pink binoculars to witness a cerulean blue kingfisher shoot out of the sky like an arrow to seize an unsuspecting crab.

Quite apart from the obvious pleasure the kids take in the natural world, these are important and formative perspectives for a young mind; an environ­mental literacy every bit as important as developing vocabulary. Yet in a world dominated by technology, physical contact with untamed nature is gradually disappearing. Parks have structures for children to play on, plants are set out in rows, green space is drained, grassed, mown and cordoned off.

“For a new generation, nature is more abstrac­tion than reality. Increasingly, nature is something to watch, to consume, to wear—to ignore,” writes Richard Louv in the introduction to his book Last Child in the Woods. “As the young spend less and less of their lives in natural surroundings, their senses narrow, physiologically and psychologically, and this reduces the richness of human experience.”

As contact with wild nature diminishes, is a liberating, vitalising, terrifying and perfectly natural element of childhood being regulated away? There’s a lot to be said for an unmediated ramble through mud, forests and waterways. And I dare suggest, parents might learn a thing or two also.