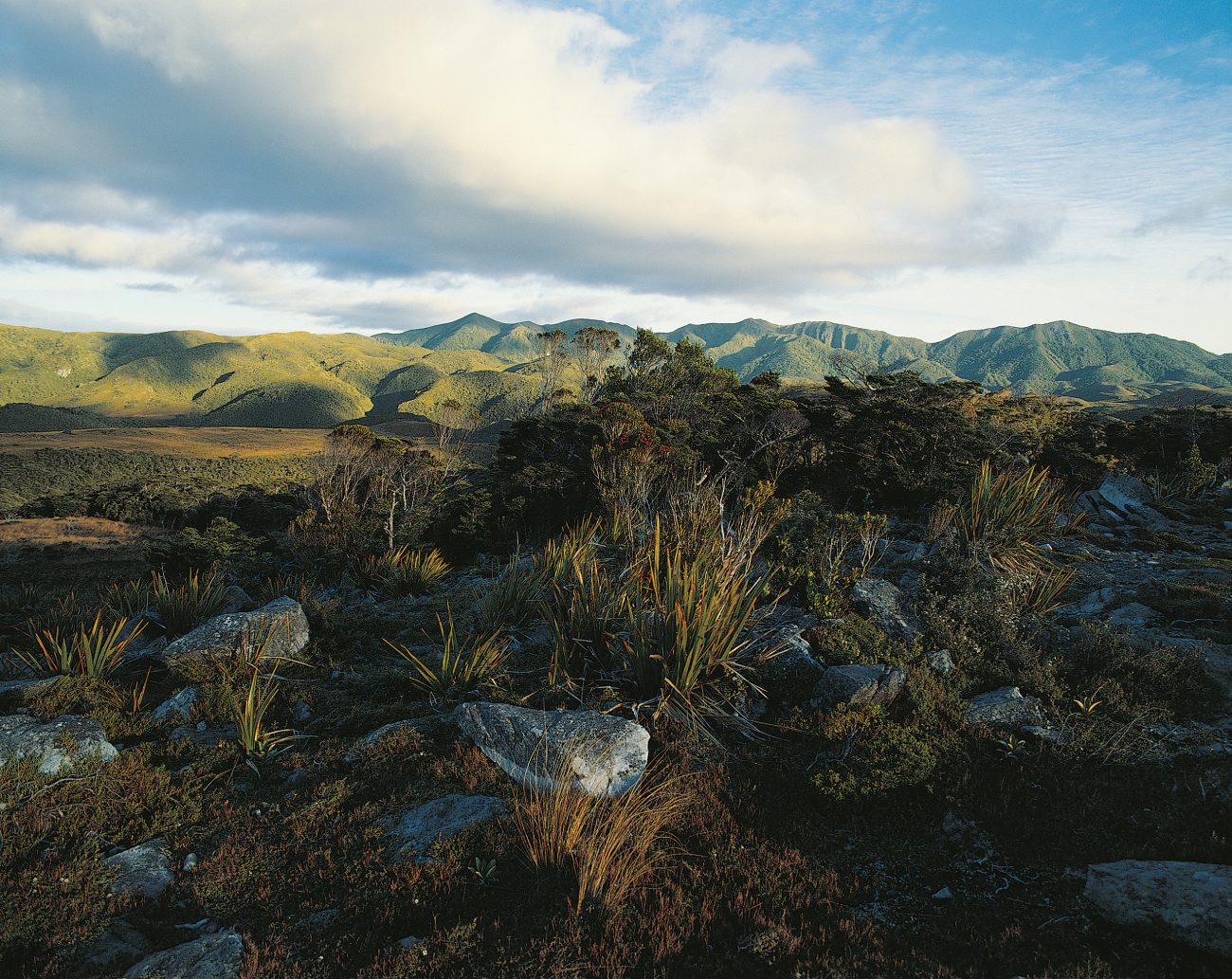 Two contrasting landscapes are likely to linger in your mind after you’ve walked the Heaphy: one, a high, silent, tussock plateau; the other, a loud coastline where waves reach brashly towards groves of tropical palms and flowering rātā. These contrasts often accentuate divergent emotions of fear and attraction, awe and intimacy—it is all part of the appealing variety you experience on this traverse through forests and ancient geological structures in the northwest of Kahurangi National Park.

Once beyond the first paddocks and scrubby spurs, the track enters a diverse forest that includes huge old red and hard beeches, rimu and miro, with distinctive mikimiki and toro trees in the understorey.

The track crosses streams at regular intervals, and windows in the forest open towards the granite summits of the Lead Hills and Mt Olympus across the Aorere Valley, and beyond to the Dragons Teeth on the Douglas Range.

The downs immediately make an impression by their strangeness: the high rolling plateau of open tussock and occasional forest contrasts with the rustling patches of mountain neinei and silver beech. Perhaps the downs landscape catches you off guard because mountainous country isn’t meant to be so smooth and flattish, and forests aren’t supposed to sit above alpine tussocklands. For whatever reason, it’s queer country and nearly everyone feels something of its eeriness, even if only retrospectively, once down in the semi-tropical forests of the Heaphy Valley.

As you move over the downs the track traverses tussock flats where rivers like the Big cut raw into the old peneplain and begin coiling and curling in slow meanders before their sudden descent into mossy beech forest.

Heading downriver, the track wends between exquisite avenues of nīkau palms and tree ferns, and massive northern rātā clear the surrounding canopy, festooned in perching and climbing plants. Kiekie and supplejack vines make much of this forest quite impenetrable, and warmth-loving species like kawakawa, rangiora and kōwhai complement the forest’s exotic nature. Further enhancing this section along the river’s final meander to the coast is a dramatic array of limestone landforms, including a rank of bluffs that not only walls in the southern bank, but also provides intriguing track-side architecture. A large surf invariably runs hard into the river, as it rushes across the swollen face of the sand.

After three or four days walking, the almost violent power of the place seems paradoxically to create a sense of inner peace and contentment, especially at dusk when the sun boils into the western sea behind the rising spray of breaking waves.