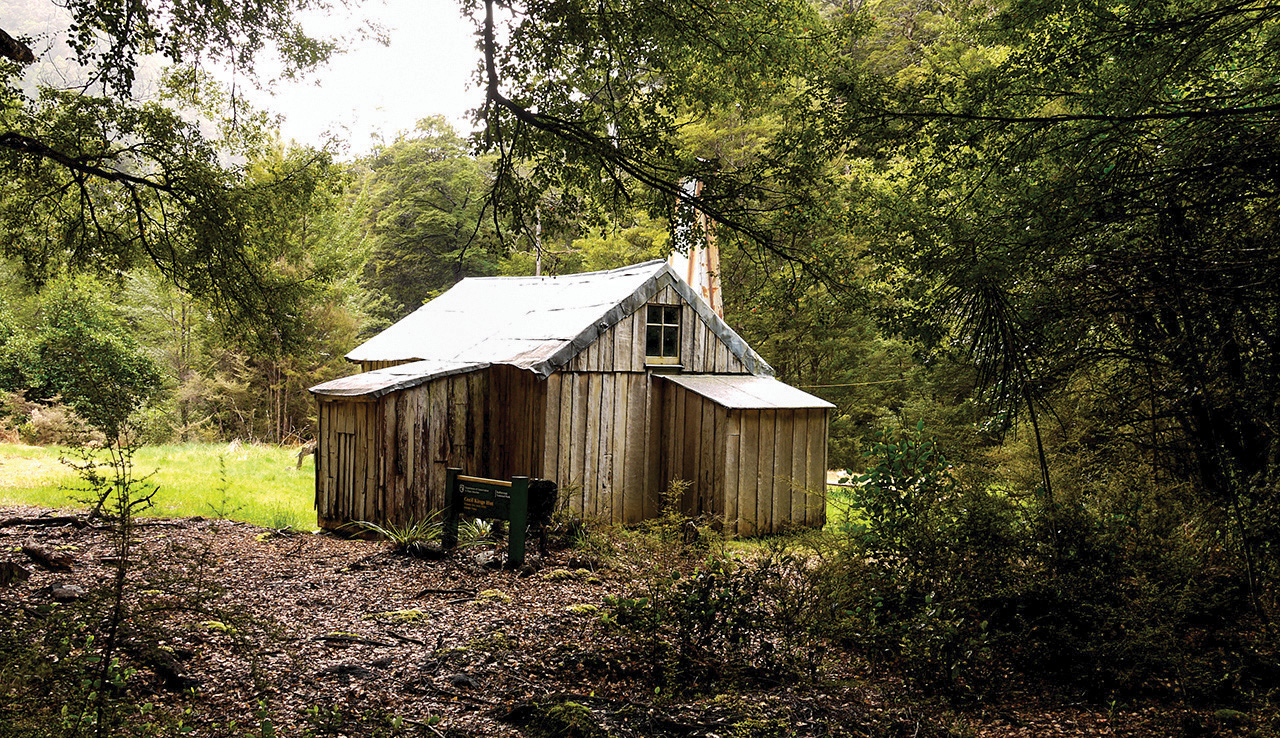 There’s nothing like the sight of a hut after a long day’s tramp, but modern DOC huts tend to be rather utilitarian, with their dull colours, corrugated iron, and plywood interiors. It’s always a joy to stumble across those rare huts that have a little more character and give you an insight into how early outdoorsmen and women carved out a living from the tough New Zealand bush. On Kahurangi National Park’s Wangapeka Track, Cecil King’s Hut is a charming, restored, beech-tree bush cubby that does just that.

There are varying versions of the story of Cecil William King and his hut, but what is known for sure is that he was a goldminer and built the timber slab and batten hut around 1935. He used beech poles as framing, clad it with wooden slabs and roofed it with shingles, though this was later covered over with iron. King claimed he built it from a single fallen red beech; he planted the beech that now stands tall beside the hut as a replacement.

King mined gold during the Depression, then for 46 years travelled from Wellington to Kahurangi to spend summers at his hut. As tramping increased in popularity, he became a well-known local character, offering billy tea and a chat to those passing through. It’s hard now to imagine walking through the bush in a national park and coming across someone’s home, and then the joy of being invited in for a cuppa.

King died in 1982, and so cemented was his identity to his hut that his ashes were scattered around its base. In 1991, New Zealand Forest Service ranger and local Max Polglaze restored it using silver beech, fixing rotten bits, floorboards, the leaking roof, and straightening it out. Today, it’s a four-bunk hut with a low ceiling, an open fire, a large galvanised-steel chimney, two windows, plastic-covered mattresses, and plenty of mice. Hung with King’s rusting old implements, it’s an in-situ monument to those goldmining days; nearby, there’s obvious evidence of his mining tailings. Five hundred metres back down the track there is a newer DOC hut at Kings Creek, with 20 bunk spaces. But Cecil King’s Hut gives you a chance to taste history—and it’s free.

The Wangapeka itself is soaked in colour: bright, lush, draped mosses and the deep, jewelled blue holes of the river, frequented by whistling whio. But the Wangapeka’s future is in question; in 2017, Buller Mayor Garry Howard and his district council revived a 19th-century idea to build a road connecting the West Coast with the Nelson-Tasman region and commissioned an investigation into its feasibility. Anyone who spends the challenging four days walking the Wangapeka will shake their head in bewilderment at not just the massive feat of engineering this would entail, but the unnecessary destruction of a primordial, quietly beautiful track.