Decomposition is the ultimate fate of all things: life, human culture, the built environment, you and I. Many photographers obsess over images of decay, from consciously artful pictures of rusting cars, to the more ad hoc photographs of those who leap the fences of abandoned properties to document their ‘urban exploration’.

Australian photographer Hamish Campbell says he’s not an urbex-er. Or not really. “There’s a tight sub-culture of urban explorers in Japan, and they’re concerned with being the first to explore a new site,” he says. “I’m happy to go in afterwards and photograph the space differently.”

Campbell has been living in Japan for seven years, and in between commercial jobs, his personal work documents the urban debris of Japan’s late-1980s industrial expansion and subsequent recession. At that time, much of the workforce left the provinces to seek employment in the cities, leaving hospitals, schools, homes and farms to their own devices. People simply walked off their properties.

“I visited an abandoned hospital in a small rural town. It was state-of-the-art only a decade ago. In the office I found a metre-high stack of bonds from the local community that probably helped fund the project. There were three or four huge MRI machines, everything was left there, all the equipment.”

Images that result from urban exploration rarely acknowledge their historical context, relying instead on the power of decay to imbue photographs with meaning. But Campbell isn’t much into glorifying ruins, and is more interested in peeling back the patina of filth. These abandoned structures, he says, echo his experience of Japan. “At the core it’s about isolation,” he says.

“As a foreigner it’s a theme that I feel attuned to—geographically, culturally, socially. It runs through all my work. With these abandoned places, you get a very concentrated dose of that sense of isolation in one physical space.”

In 2013 he became aware of an abandoned house from the Taisho period in northern Japan, where some urban explorers had described finding some old photographs. Campbell was intrigued, but unprepared for what he found. Behind a rotting door on the second level of the crumbling house was a darkroom, and among the debris where the roof had collapsed, he discovered more than 200 glass-plate negatives.

Many were damaged and mouldy, some plates were shattered, others bonded together by the combined effects of water and time to create unusual and fragile composites.

They appeared to be the work of one photographer over a 10–20-year period following the construction of the house, which Campbell later dated to 1922. Most of the pictures were shot in the house itself, or its immediate surrounds, and included family members and friends, with relationships that are revealed across all 200 plates. 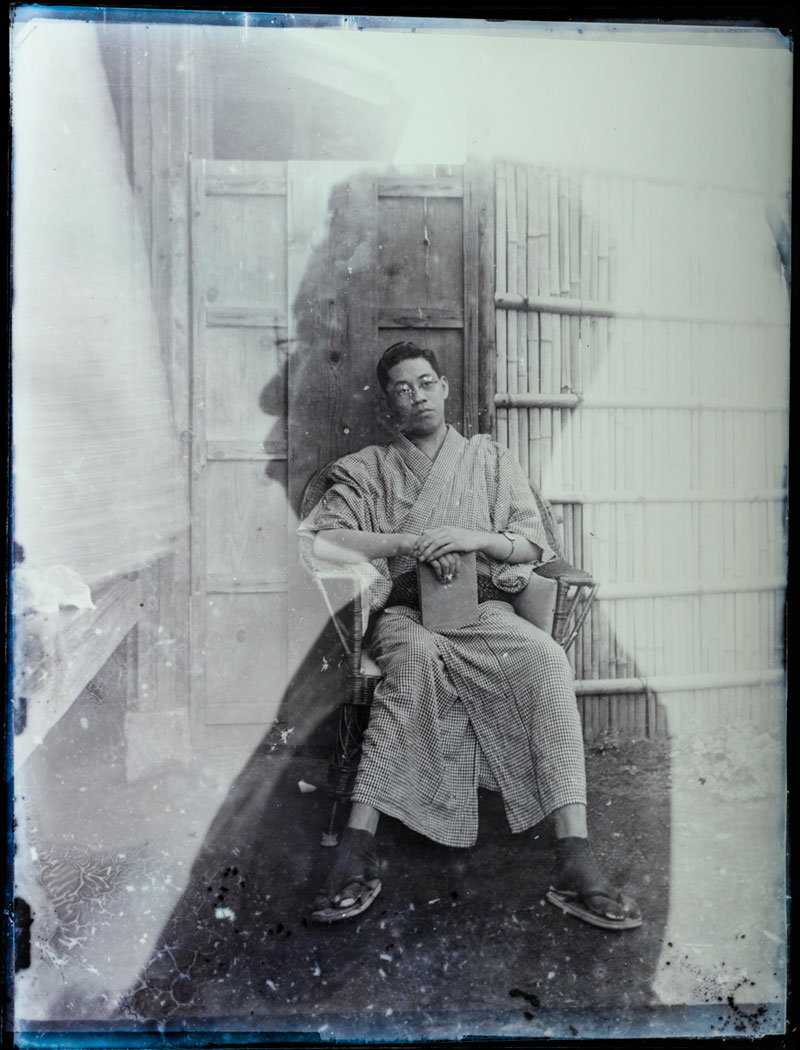 The find inspired a series of half a dozen trips to the house over an 18-month period. Each time Campbell would capture more of the negatives—propping them up in front of a B1 and soft box and re-photographing them with his medium-format Hasselblad—and photograph the remains of the house too, attempting to place his camera and tripod in exactly the same position as the original photographer had nearly a century ago.

“I was trying to make an actual connection to the period,” he says. “I tried to match 40 images, but only managed 20. There had been some alterations to the house that made it impossible, and thick bamboo and enormous trees had grown and encroached onto the property. In the end, only half a dozen composite images turned out to be good enough to include in the collection.”

Campbell found a perfect match of a bride walking into the genkan, or entry foyer, of the home, and super-imposed the image accurately over the image of ruins of the same entrance; the past inhabiting the future. In another, construction workers erect profiles for the new house, super-imposed upon the ruins of the abandoned house.

In one sense it seems ghostly or apocalyptic. But Campbell sees it differently. “It’s easy to fall into a trap of projecting some sort of tragedy that happened in places like this. But there was no disaster, just nature and time. A crack appears, widens, and water does the rest,” he says. “Finding the pictures and seeing those happy family memories makes it quite clear this was a normal family home. To me the ruins seem peaceful and reassuring.”