Franklin D Roosevelt had a problem. His New Deal program to drag the United States out of the Great Depression was facing opposition in the courts, and his ‘Brain Trust’ had advised a new initiative, the 1935 Resettlement Administration, to relocate the poorest third of farmers to viable land. Yet this new plan was facing scrutiny too.

It had become a battle for public opinion, and economist Roy Stryker commissioned an army of photographers with the goal of “introducing America to Americans”. He believed that if a wider voting block—and indeed those in power—could witness the plight of the rural underclass, there would be a greater appetite for the dramatic acts of social engineering the administration was about to embark on. (Today we call this ‘content marketing’.)

Among the photographers were Dorothea Lange, Arthur Rothstein and Walker Evans; the biggest names in documentary photography, and the forebears of the American documentary tradition. Stryker made certain the photographers had what they needed, but the brief was vague in nature—he demanded photographs that “related people to the land and vice versa”, and handed out shopping lists of desirable themes; “church”, “court day”, “barns”. For photographers with a story to tell, however, this was plenty to go on.

What followed was an orchestrated photo-bombing of mainland USA—11 photographers toured every two-bit town and documented the state of the nation, warts and all. Especially the warts. In all they created some 250,000 images of rural poverty, resulting in 164,000 developed negatives and 77,000 photographic prints, which were catalogued by another army of public servants into a growing collection held at the Library of Congress in Washington DC known as ‘The File’. 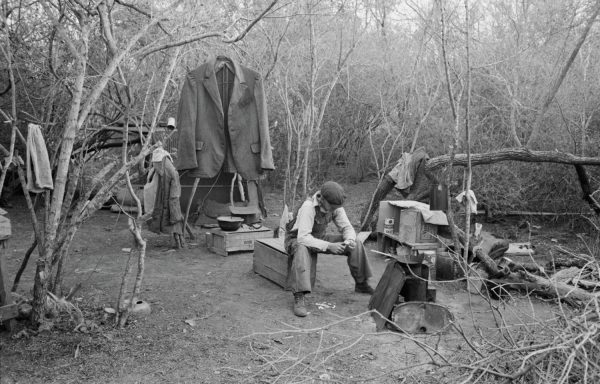 Today, as the United States faces a new economic low, a team of historians, statisticians, GIS mappers and data scientists from Yale University lifted the metadata from this most comprehensive and connected body of work to give it a 21st–century redux, hauling it out of relative security and making it ‘discoverable’.

The project is called Photogrammar—see photogrammar.yale.edu—and consists of a wicked-smart wrapper that will surface any one of 170,000 images in the decade from 1935 against just about any metric you care to mention. You can look up barns photographed by only Walker Evans, or everything shot by Dorothea Lange in California’s dust bowl. It will even plot every photograph on a map, coloured by the photographer who captured it, giving a new generation of curators an opportunity to second-guess the insights of the loggers at the Library of Congress, and perhaps re-write history.

Indeed a casual browser can now reach previously unfathomable depths of depression, deep in the deepest archive of the Great Depression.

But it’s not as bad as that might seem. There is beauty in this collection, and truth: it is by far the most profound state-sponsored soul-search that the United States has ever embarked upon, and in the spin-doctoring all-is-well environment of the modern democracy, possibly the last. While the Resettlement Administration didn’t cure the nation of poverty, Americans were arguably better informed in 1936 than they are today, where Google StreetView offers 100 per cent coverage, but zero per cent insight. For all the communications technology at the disposal of governments, our view of communities at the bottom of the heap remains opaque, and truth remains as elusive as ever.