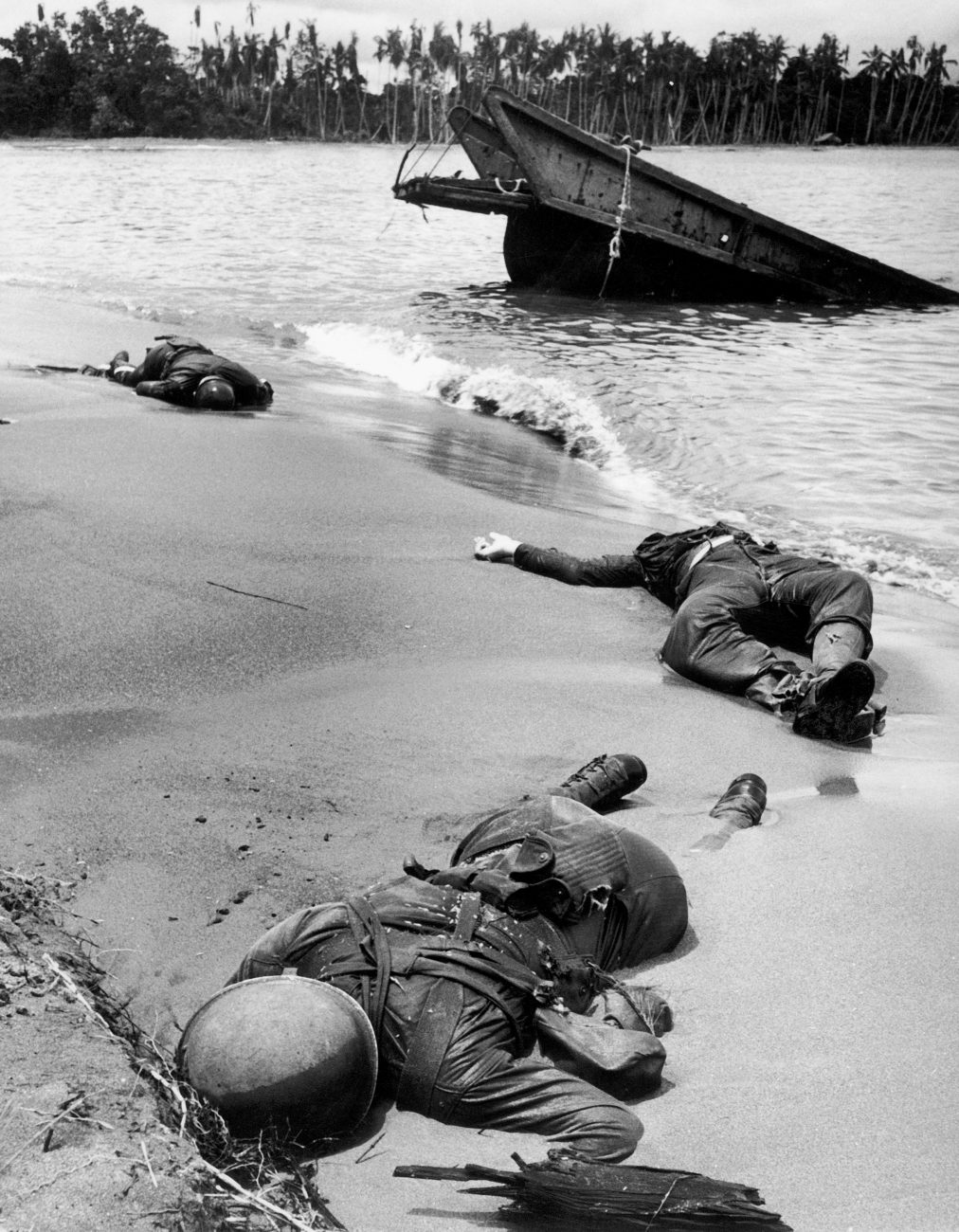 Despite two world wars, it was not until September 1943 that Americans saw a photo of dead American servicemen.

They lay on the beach in Buna, Papua New Guinea. Two of them face-down, one on his back, spread-eagled and washed by the tide of the Solomon Sea. Behind them a Japanese landing barge lay foundered, much like the bodies. Beyond that, the line of coconut palms where their unit had been holed up for days, and behind the photographer, the Japanese machine gun that had cut them down as they ran along the shore.

It was a frame that was respectful, even serene in its stillness, but left no ambiguity of the horror of the conflict—especially as it dawns on the viewer than the body in the foreground is already crawling with maggots, and the water-line on the serviceman’s helmet evidence that the tide has come and gone a number of times while he has lain there.

It had taken a 25-year-old Life correspondent in Washington named Cal Whipple some seven months to get George Strock’s picture past the government censors at the Office of War Information. The magazine had printed plenty of gruesome photos of fallen Japanese servicemen—especially from Strock’s 1943 Buna coverage—so the censorship was entirely concerned with the fact that these were America’s own. Ultimately, the decision to allow the publication of the photograph was made in the White House, by then President Franklin Roosevelt.

Life magazine editors reasoned that “the American people ought to be able to see their own boys as they fall in battle; to come directly and without words into the presence of their own dead.” Perhaps importantly, the identity of the servicemen was obscured by their position and the sand that had accreted around them.

The decision was praised by other outlets, among them the editor of The Washington Post, who suggested that “If we are to behave as adults in meeting our civilian responsibilities, we must be treated as adults. This means simply that we must be given the truth without regard to fears about how we may react to it.”

Today, the greater threat is not censorship but versions of the truth so embellished or distorted that they are no longer fact. ‘Fake news’ courses through social channels, unbridled by fact-checking or publishing conventions of old-world media outlets.

So how do we come ‘without words’ into the presence of new and unpopular truth today? How do we meet our ‘civilian responsibilities’, or indeed ‘behave like adults’? This is the challenge of our time. Like Whipple, there will be protagonists who can lead the way. Like Life magazine, there will be media outlets too.

The publication of Strock’s picture came when Life was at the height of its powers, and its audience. It influenced the shape of magazines—and more so photography—for some 80 years. But the appetite for a photographic news weekly dwindled with the advent of television, and Life was overtaken by the times. The market shifted, the audience changed, and today the towering media outlet is remembered only by the impression it left on society—the way it influenced photography, and those images that changed the world forever.

Pro Photographer magazine is following Life into death, in some sense a victim of similar forces—a rapidly changing advertising market and the promises of a digital magazine audience that didn’t turn out as anyone had expected, least of all the computing giant Apple that had created it. As the publisher of Pro, I’ve written this column ‘Lost & Found’ for 22 issues, and never considered that the theme might one day describe this magazine. I’m incredibly proud of what we’ve produced with Pro and its unique framing of the photography world. I will miss it, but all is not lost—I can’t tell you how much we’ve learned from the experience, from the combination of app and print that defined our approach and continues to influence the shape of New Zealand Geographic, a sister publication.

Life died as a weekly in 1972. Pro Photographer expires with this issue. Both gone, but not forgotten. These changes modify the way we think about photography and the photographic record, an idea that has been the basis of this department for 22 issues—everything lost will be found.