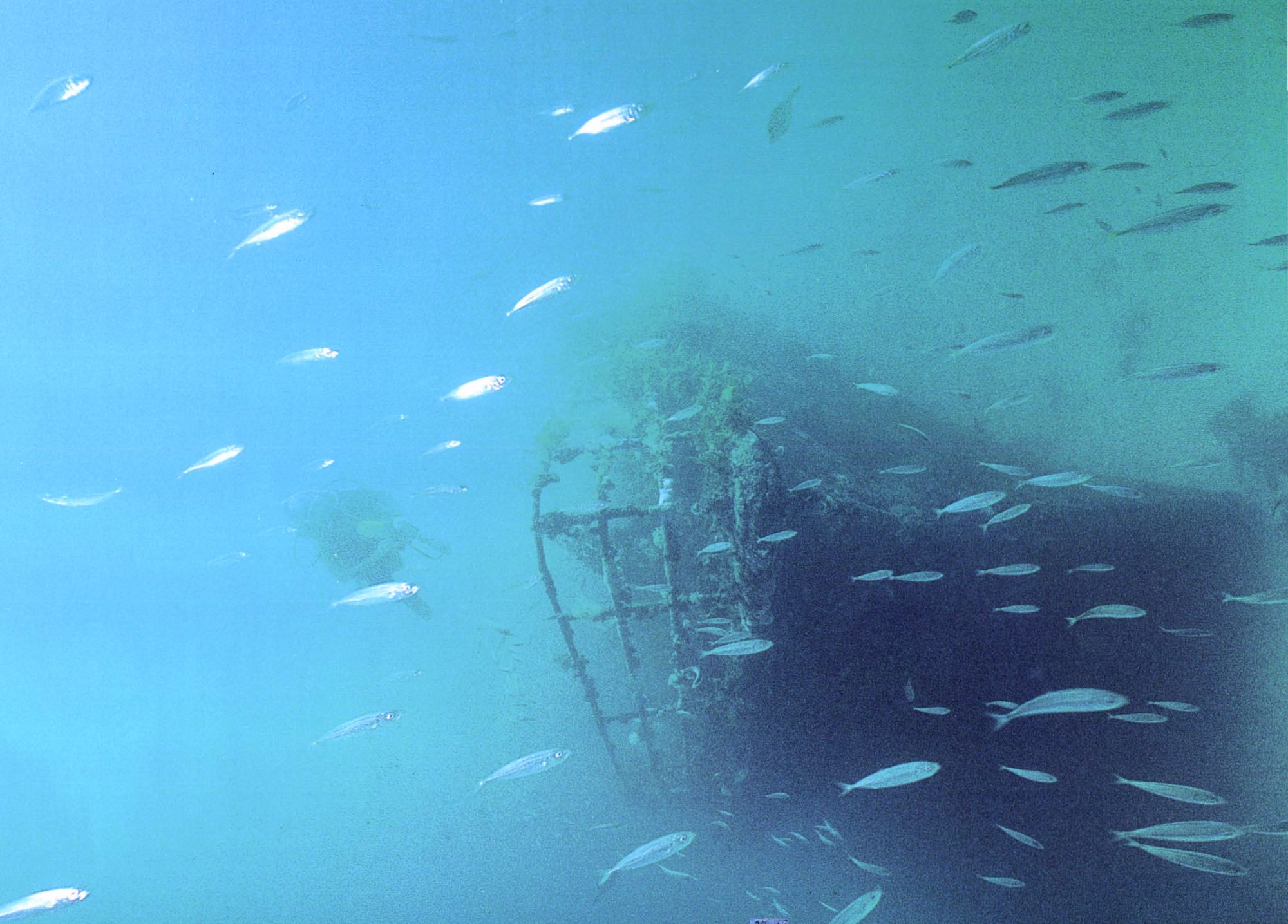 However, this early encounter was less than auspicious. According to the account kept by Joseph Banks, the Maori began chanting and throwing fish, pelting the ship with sticks and stones and behaving “most abominably saucy.” After an exchange of musket shot and stones the skirmish came to a close as foul weather forced Cook south to the Bay of Islands.

Truly abominable was the encounter which led to the latest piece of maritime history enacted at these islands. In 1985, as she was preparing to sail for Moruroa Atoll to protest against French nuclear testing there, the Greenpeace ship Rainbow Warrior was bombed as she lay in the port of Auckland.

In the dead of night on July 10, French secret agents donned diving gear and attached limpet mines to the ship’s hull while she was moored at Princes Wharf. Greenpeace photographer Fernando Pereira was killed in the resulting explosion, and the ship damaged beyond repair.

The bombing sparked interna­tional outrage as the news flashed around the world, with Prime Minister David Lange branding it “a sordid act of international state-backed terrorism.” Within days Auckland police had arrested French agents Alain Mafart and Dominique Prieur, two members of a larger team of saboteurs.

At first the French government denied any involvement, but was gradually forced to admit to the sabotage as evidence against its agents began to mount. The scandal rocked the French establishment and forced the resignation of defence minister Charles Hernu and the sacking of Admiral Pierre Lacoste, head of the secret service.

The United Nations ordered France to pay compensation of $13 million and make a formal apology. Greenpeace used the money to build a replacement Rainbow Warrior II, which sailed to Moruroa in 1992. French commandos arrested the new Warrior, but immediately following the ship’s release the French government announced the suspension of nuclear tests. It seemed that the campaign to halt testing had finally been won.

Meanwhile, as the scandal surrounding the bombing died down, a new controversy emerged over what to do with the wreck of the original Warrior. This is where Dover Samuels enters the saga. A  key architect in bringing the ship to the Cavallis, Dover explains that soon after the bombing the New Zealand Underwater Association proposed that the wreck be scuppered in an area where she would become a living reef, attract­ing marine life and recreational divers. This was seen as a fitting way to lay the Rainbow Warrior to rest after a life of protecting the marine environment from pollution and over-exploitation.

After a hui in Matauri Bay, Ngati Kura, a hapu of Ngapuhi, and Greenpeace agreed to bury the Rainbow Warrior in the waters of the Cavalli Islands. A site was chosen which provided an acceptable diving depth, safety for vessels passing overhead and some protection from the battering swells of the Pacific. On December 2, 1987, her hull patched for the journey, the ship was towed north. Ten days later, watched by a crowd of well-wishers on sea and land, her sea cocks were opened and she slipped below the surface.

Dover remembers the traditional Maori burial well, because he was in the water as the ship went down. “Within 30 minutes there were curious triggerfish swimming around.”

There is warm pride in Dover’s voice as he recounts the story. More than anyone else, he is the ship’s day-to-day guardian, diving on her several times a week. “To me the Rainbow Warrior is not just a steel structure, it’s a ship with a living heart and the dignity and mana that a warrior’s burial carries with it.”

With burial comes decay, and after seven years the ravages of storm and corrosion have taken their toll: the wreck’s superstruc­ture is beginning to fall apart. Eighteen months ago the front part of the wheelhouse dropped to the sea floor, followed by more debris in April. Today the hulk and its associated marine life maintain a precarious balance between stabil­ity and anarchy—a diverse habitat of ordered chaos.

All shipwrecks attract the curious, and the Rainbow Warrior’s added fame has made the wreck a popular dive destination. “They come here from around the Pacific, Europe and North America—even from France!” quips Dover. But he’s not complaining; his well-ap­pointed beachfront retreat, Oceans, is often booked out through the summer season, with up to 60 people diving on the Warrior at peak times.

But popularity has its price. Over the years Dover has noticed some pirating going on, with the unscrupulous spearing resident fish and taking the odd souvenir from the ship. The local Maori community have taken on the role of maintaining the kaitiaki (conservation) of the Warrior, and along with Greenpeace want the wreck to become a protected area or marine reserve. Enhancing the recreational and conservation value of this national treasure by creating such a reserve is the next logical step as the tenth anniversary of the bomb­ing approaches in 1995.

A keen supporter of this proposal is underwater photographer Roger Grace, who has worked for Greenpeace on several of the new Rainbow Warrior’s voyages around the Pacific. A regular diver on the wreck since 1988, his photographs on the following pages (mostly taken in March 1994) reveal the Warrior’s transformation from wreck to reef.

When a ship sinks, it triggers a mad scramble among marine creatures looking for a place to live. Many of these biological drifters, which collectively make up a large component of marine plankton, are the mobile larvae and spores of organisms which will eventually settle down and spend their whole adult lives in one place—if they can find a suitable location. For these creatures, whether sea anemones or sponges, barnacles or bryozoans, a sunken ship is a real estate bonanza.

Settlement of organisms on fresh underwater surfaces does not operate on a simple “first come, first served” basis. It proceeds through a series of stages, each more or less dependent on the one before it, until the sequence has run its full course and a “climax” community of organisms exists.

The Rainbow Warrior was first available as a settlement site while it was sitting idle in Auckland Harbour for several months. Here shallow parts of the hull became occupied by the small acorn barna­cle Elminius modestus, which was therefore already present on parts of the hull when the ship was finally laid to rest.

Once the whole ship was under the surface, a vast number of new settlement sites became available. First to become attached to the fresh surfaces, within hours of the sinking, were marine bacteria and microscopic plants called diatoms. These placed a thin biological film over much of the wreck surface, which for some of the later settlers is a prerequisite to successful colonisation.

The irregular shape and struc­ture of a wreck provide many different microhabitats, some of which are more suitable for some organisms than for others. For example, seaweeds, which need light for photosynthesis, are con­fined to the upper well-lit surfaces, whereas plankton-eating animals such as sea anemones, bryozoans and sponges are able to colonise more dimly lit overhangs.

Horizontal surfaces, particularly in the dark interior where there is little water movement, are often covered in a layer of silt, which makes attachment difficult. Up­standing structures such as bollards and railings, on the other hand, experience constant movement of water around their surfaces and are keenly sought as settlement sites.

ety fuzz, several types of hydroids, polychaete worms with limey tubes and encrusting and fluffy bryozoans settled. Tiny amphipods, a bit like the sand hoppers common on beaches,trapped silt particles from the water and built little muddy tubes on the wreck surface and in tiny nooks and crannies. Barnacles grew rapidly on areas where there was vigorous water movement.

Gradually a greater variety of animals and plants came to inhabit the wreck, while fishes, some dropping in from the plankton as juveniles and some arriving through exploratory travels from nearby natural reefs, were finding the wreck a nice place to live. As more attached life developed, more food became available for nibblers such as leatherjackets and fossickers such as porae and goatfish.

On the upper surfaces and railings, sporelings of the common kelp Ecklonia radiata and colonies of the white anemone Actinothoe albocincta staked their claim, while in shaded areas bryozoans settled, then radiated outwards and began to coalesce. Gorgeous jewel anemones, each a different fluorescent colour from its neighbour, competed with the bryozoans for space, so that soon the ship’s side was a kaleidoscope of colour—nature’s hues proving more beautiful than the original painted rainbow on the ship’s hull.

Colonisation of the interior of the ship, by contrast, progressed slowly, partly because of the silt build-up, but more importantly because of lack of water movement. These enclosed pockets are rather like dead-end caves, where plankton-rich water cannot circulate. And since most of the attached animal life on the wreck depends on plankton for food, such sites received few permanent residents.

Squatters, however, experienced no such limitations, and the ship’s interior became a favourite daytime haunt for nocturnal creatures such as crayfish, conger eels, rock cod, and schools of slender roughies. The roughies emerge from the confines of the wreck at night to feed on plankton over the wreck.

Marine life on the Rainbow Warrior has now reached the climax stage, where small localised changes are occurring all the time but there is no progression to another stage. Fishes such as leatherjackets and snapper nibble away at animals attached to the ship, clearing small areas and exposing a new surface for settlement. Thus, on a small scale, the whole succession process begins again. It is rather like the situation when a large tree falls in the forest, exposing a fresh area to bright sunlight and opening up opportunities for new colonisers.

Although the wreck community has reached a state of equilibrium, dramatic changes are still in store. First, the main deck will start to collapse. It is made from teak planking, and while it was initially a satisfactory surface for attachment, the timber is now honeycombed with borings of the so-called ship-worm, Teredo, a strange worm-like bivalved mollusc which bores its way through wood, eventually weakening it until it falls to bits. Very soon large holes will begin appearing in the deck, opening up the interior to light and water movement. Then we will see a burst of colonisation of the newly exposed surfaces in what was the ship’s interior.

Over many more years, the wreck will eventually be reduced to a pile of encrusted metal plates lying on top of each other on the seabed. Finally there will be nothing left of the ship, and the seabed will be a flat sandy plain once more.

But in the meantime, the Rainbow Warrior serves as a great attraction to divers and a home to marine life. A little oasis in a sea of sand. 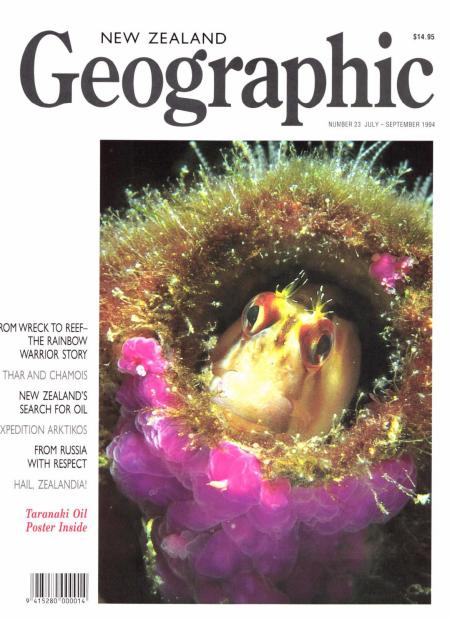 The end of the rainbow