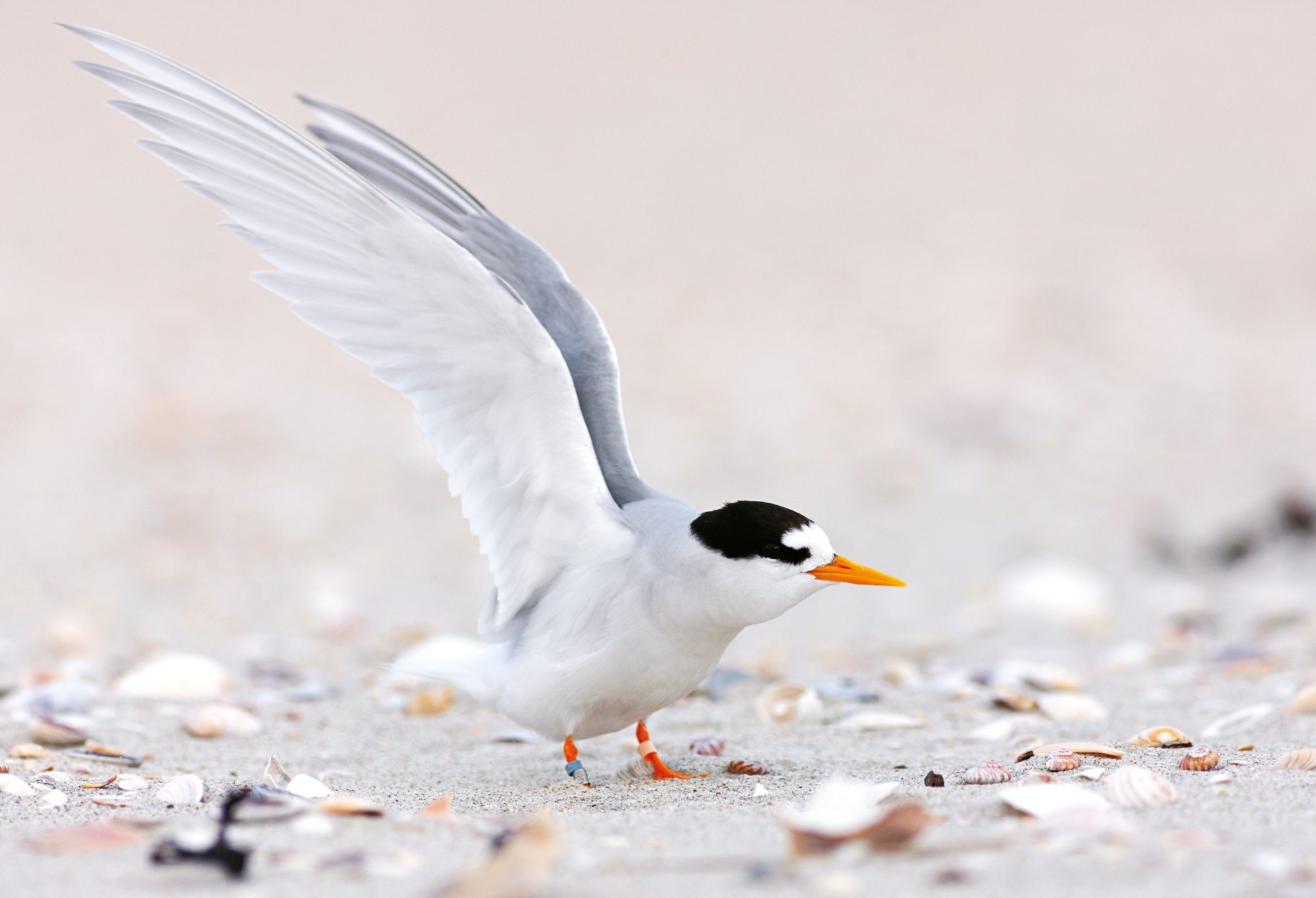 Few who walk past the crashing Pacific breakers and through the white, sweeping dunes of Waipu will see the tiny bird nesting in its small sand hollow, camouflaged among the scattered shells. One casual step and another egg or chick could be crushed. If it remains unscathed, its distressed parents, frightened away by walkers and surfers, dogs and four-wheel-drives, might not reach it before it becomes too hot or too cold to survive.

I’m standing at the end of the long sandspit at the Waipu Wildlife Refuge, looking out across Bream Bay to the Hen and Chickens Islands, dark and craggy on the horizon. Abby Meagher, a Department of Conservation community relations shorebird ranger, points out two endangered New Zealand dotterels scampering around on the shore in their soft orange breeding plumage, but there’s no sign of the New Zealand fairy tern.

With only 36 individuals—including just 10 breeding pairs—left in the entire country, the endemic sub-species, Sterna nereis davisae, is New Zealand’s most critically endangered bird.

Walking down the Waipu sand-spit—three starkly beautiful kilometres of soft dunes, red grasses and scallop shells—Meagher describes the dynamic, shifting landscape, which is never the same from one season to the next. These constant changes are part of the challenge for the tern, as nesting grounds move with the sands. Only one chick fledged at Waipu in the past two seasons. “Fairy terns nest just above the high-tide line, so if we get one of our easterly storms or a high spring tide, the eggs or chicks can easily be washed away,” says Meagher. In an effort to improve the birds’ chances, she has created safer trial nesting sites deeper in the dunes, moving thousands of shells onto wide patches of sand and fencing them off—part of a strategy that DOC has had in place for the New Zealand fairy tern since 1983.

Numbers have doubled since the DOC programme began, and the goal is to increase the New Zealand fairy tern population to 100 by 2021. With this in mind, a further $89,000 has been allocated for habitat restoration at Mangawhai Spit Wildlife Refuge. The department has even investigated corporate sponsorship of the bird and garnered increased support from local residents, conservation groups, volunteers and schools. But in a move that has surprised locals, the single fairy tern warden position at Waipu was cut from the budget for the 2009/10 season, and now DOC’s new “optimisation project” could result in the fairy tern being left to its own devices.

With a funding cut of $54 million in the 2009 Budget, DOC has been forced to radically evaluate its conservation priorities. Only 20 per cent of threatened species currently receive funding and the department must choose which of these—and their ecosystems—can be saved. It has committed to an optimisation project that will rank species, and fund projects accordingly—entire species reduced to numbers, probability and dollar-values.

This controversial process is known as triage, a term originating on the battlefields of the 19th century and used to describe a framework that allowed under-resourced medics faced with high numbers of casualties to make reasonable decisions about those they could realistically save.

In conservation terms, triage prioritises species using four values—the probability of success, the funds required, whether conserving the species would also benefit other species, and their relative “value” to New Zealand. This last factor is largely based upon endemism—whether a species is unique to a country or area. And while the New Zealand fairy tern is a sub-species found nowhere else in the world, its close Australian cousin is listed by Birdlife International as widespread, believed to number up to 10,000 worldwide. As such it falls well outside the critically endangered and endemic classifications, and is rele-gated to the outfield of conservation priorities as well.

However, a study undertaken by research technician Marleen Baling for DOC and the University of Auckland has strengthened the fairy tern’s case for endemic status. Through mitochondrial DNA sampling, Baling, of Massey University’s Ecology and Conservation Group, showed that the populations in Australia, New Caledonia and New Zealand are each genetically distinct.

Mark Bellingham, North Island conservation manager for the Royal Forest and Bird Protection Society, says the country has an international obligation to protect species and sub-species that only occur in New Zealand.

However, DOC isn’t convinced the bird is unique enough to be considered a priority, and cost effectiveness will be the main driver in management decisions.

“It is not about abandoning difficult-to-save species, but rather about prioritising actions given finite resources,” says Professor Hugh Possingham of the Spatial Ecology Lab at the University of Queensland, an influential proponent of triage. The lab specialises in conservation resource allocation decision theory in environmental management and bird conservation, and has developed an algorithm to help conservation managers allocate resources more efficiently. Many organisations, including DOC, are now employing its principles.

Critics argue that the goal of conservation should be to save every species, and that accepting extinction as inevitable, or a consequence of prioritisation, is defeatist.

After all, who could have believed that Chatham Island robins could recover from a single breeding female, or kakapo from a total population of fewer than 50?

Possingham and colleagues respond that they are not sanctioning extinction in favour of efficiency, they are simply admitting “the possibility of extinction” of one species in order to save several others. Triage happens “whenever there are insufficient funds to do everything, which has always been true for conservation…we are doing it everywhere, every day,” says Possingham. It’s simply “smart decision making”.

Once widespread, the New Zealand fairy tern is now found in only four New Zealand locations: Waipu and Mangawhai in Northland and Pakiri and Papakanui Spit in the Auckland Conservancy. The sub-species is classified as “nationally critical”, the very same classification as that of the kakapo. However, because kakapo are endemic and iconic they have 10 staff devoted to their recovery, and receive over $3 million each year for breeding research and predator-proof nesting areas. Fairy terns, in contrast, receive little funding.

“With intense management it can be saved,” says Whangarei volunteer Audrey Williams, of the New Zealand Fairy Tern Trust. “But this will mean more predator control and more people control.” Williams, who has worked in tern conservation for 25 years, acknowledges that “doing the greatest good for the greatest number is fair enough”, but only if the New Zealand fairy tern is protected.

Whatever its status, Bellingham believes the fairy tern’s habitat has been neglected. “While everybody has focused on individuals and nests, the most serious threats to the species are coming from developments adjacent to the last few breeding, roosting and feeding areas.” Forest and Bird is now starting to identify “no-go development zones around the last few sites, and new sites elsewhere in the former range from North Cape to Nelson. If the principles of triage were applied to habitat instead of individual species, more species that share the dunes would benefit, such as dotterels and variable oystercatchers. “This may seem an obvious strategy,” says Bellingham, “but it has escaped the minds of DOC scientists and wildlife managers.”

DOC’s goal is to save as many endangered species as possible from extinction, and a triage model may help to efficiently allocate resources to achieve that, even at the cost of the fairy terns.

But if Abby Meagher is worried, she doesn’t show it. Asked about the impact of the triage approach on conservation management, she simply shrugs. Of course she would welcome more resources, but, she says, “you do what you can with what you’ve got. You try to make it last.”

The triage approach means taking specific parameters—the relative “value” of a species, the biodiversity benefit of preserving it, the probability of success of the conservation action, and dividing all that by the cost of the action. Value is perhaps the most contentious of these parameters, factoring complex ideas of endemism and potentially subjective judgments that triage proponent Hugh Possingham concedes place higher priority on charismatic species or places. The biodiversity value factors in the whole ecology and considers potential benefits to the wider ecology. The “probability of success” parameter is perhaps where triage and cost-effectiveness are most evident: if the fairy tern requires a significant investment but is unlikely to recover, that money could be better spent elsewhere. According to Possingham, “uncertainty around whether an action will achieve its stated goal is arguably the most overlooked parameter… As a result, resources can be wasted on impossible endeavours.” And therefore, a “management action that is likely to succeed should be given a higher priority than an action that is likely to fail.”

He has also found that the most efficient triage method is when all species are given equal weight regarding importance; this results in “the maximum benefits gained for all budgets”. Possingham and colleagues point out that if, for example, the North Island brown kiwi received heavier weighting for its distinctiveness and was given greater funding, six other species might be sacrificed.

However the method has its opponents. David Jachowski and Dylan Kesler from the Department of Fisheries and Wildlife Sciences at the University of Missouri believe that triage is contrary to the fundamental concepts of conservation biology in that it “assign[s] values to species based on the economics of their recovery”. While they agree that there is a need for the efficient allocation of scarce resources, the methods should not include extinction as an acceptable outcome. As an alternative, Jachowski and Kesler champion the allocation of resources to all species and systems, “even if only minimal resources are dedicated to the direst situations”.

The Alliance for Zero Extinctions (AZE), which is made up of around 70 of the world’s non-governmental conservation organisations from places as diverse as Peru, Turkey, India, the UK and the US, also fundamentally disagrees with the approach, stating that the assumptions are faulty and that “highly threatened species are not necessarily impossible, or costly, to save”. AZE focuses on defined and discrete habitats that contain at least one endangered species for whom that site is either its only geographical area, contains most of the population of the species, or is used by the species for one life history segment such as breeding or wintering. Given these criteria, the New Zealand fairy tern could stand a good chance of being prioritised.

But this is unrealistic says Possingham and his colleagues, who maintain that by trying to do too much, little will be achieved. They also believe that AZE has already applied triage by “selecting priority sites and species”. Possingham’s Spatial Ecology Lab at the University of Queensland includes a similar focus on habitat and regional prioritisation, but suggests that land acquisition “in many circumstances is neither feasible nor appropriate”.

Maximising our unique biodiversity is paramount and triage could be the only way to achieve it. The question remains, at what cost?

One of a rare breed

Searching for the 'grey ghost'

In defence of DoC