On November 19, 2010, around a quarter to four in the afternoon, something caused a spark deep inside the Pike River mine, north­east of Greymouth. It may have been an electrical fault, or perhaps the strike of steel on stone—wherever it came from, it ignited an incendiary cloud of methane gas. It almost certainly killed 29 workers instantaneously.

In a coal seam, long-dead organic mate­rial is squeezed by the weight of thousands of tonnes of sedimentary rock above. Subterranean heat and pressure combine to press those ancient peat deposits into beds of coal, and as they do, natural gas is produced. At Pike River, coal deposits bear around eight cubic metres of natural gas for every tonne of coal, and at least 95 per cent of that gas is methane.

At atmospheric concentrations between five and 15 per cent, methane is highly combustible, so mining companies deal with it by diluting and flushing it with gales of air, circulated through the mine by massive exhaust fans. Typically, mine managers try to keep methane levels below one per cent, and drilling equipment usually comes fitted with methane sensors that shut the machine down at concentrations of 1.5 per cent. Between early October and mid-November 2010, workers at Pike River filed 21 reports of methane at explosive levels. They were ignored. 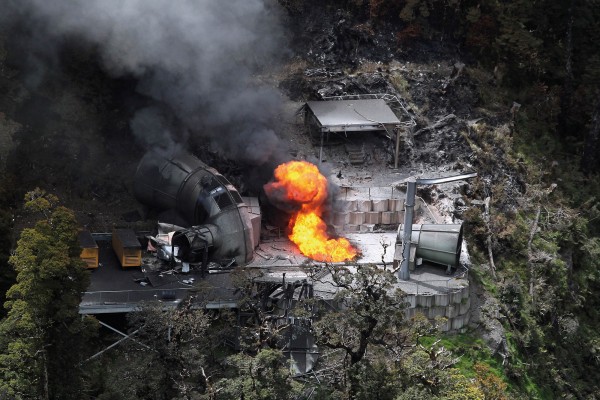 Pike River management was frantic to get the mine producing. Four years behind schedule, the company introduced productivity bonuses. Eager for the extra cash, miners laboured on in an atmosphere charged with methane.

For some reason, the gas billowed to cata­strophic volumes at Pike River on November 19. Investigators suspect that as much as 5000 cubic metres had been allowed to bleed into an unventilated ‘goaf’—the space left behind after coal has been extracted. Ironically, methane is safe at such high concentrations. But then something happened: the Pike River report suggests the goaf roof fell in, blowing the buoyant gas along connecting roadways, where it thinned to explosive concentra­tions. At its most volatile (9.8 per cent in air), methane requires just 0.29 millijoules of energy to ignite—a watch battery carries more than enough energy to trigger a catastrophe.

As mine explosions go, this one was described by investigators as “sluggish”; a long, explosive burn rather than a violent detonation. This, they said, pointed to a methane-rich atmosphere greater than 10 per cent, and possibly as high as 15 per cent. Just the same, the Pike mine was still physi­cally very small—it had been producing for only eight months—so there was little empty space to absorb the blast.

At the peak of the explosion, temperatures in the mine hit more than 1200°C (a typical crematorium operates at between 800°C and 1000°C), and fires raged through the drifts.

Rescue teams kitted up, but manager Doug White would not commit them to the hellish fume. When investigators later drilled into the workings about 200 metres west of the mine’s now-shattered ventilation shaft, they found dense clouds—95 per cent—of methane and unsurvivable levels of carbon monoxide from the smouldering Brunner Seam. That was when, said mining experts, the mine should have been sealed to stifle any further ignition. It wasn’t: five days later, there was a second explosion, as big as the first. On November 26, more methane ignited, and again on November 28.

A plan to neutralise the gases and quell the blazes with flame retardant, blown through the mine by a converted jet engine, failed. After the fourth explosion, workers noticed a change in the smoke coming from the mine—the coal deposits themselves had caught fire. Once a coal seam ignites, it can be all but impossible to stop: a large fire raged beneath the Blair Athol mine in Queensland for 54 years.

No fewer than four robotic vehicles were sent into the mine to return video footage and take atmospheric readings. All of them malfunctioned before penetrating the main workings, where investigators suspected the bodies might be. However, one remote camera captured the haunting spectre of what looked like an opened emergency box, and families also heard the account of blast survivor Mattheus Strydom, who said he’d seen the lights of a mine vehicle some 1500 metres into the drift after the first explosion, and seen a man lying on the ground. Furthermore, it was believed that three other workers, Conrad Adams, Riki Keane and John Hale, were ready­ing to board a drift runner—a mine shuttle—at or near Spaghetti Junction, to exit via the drift.

While most of the 29 victims of the blast remain beyond reach in the mine workings, the possibility that a small number were in the mine access tunnel has fuelled hopes that even a re-entry plan limited to the main drift could recover the remains of a few of the men.

To the dismay of the victims’ families, police announced in January 2011 that they would abandon any attempt to recover them. The families continued to press Solid Energy—the mine’s current owner after Pike River Coal was placed in receivership at the end of 2010—to go back into the mine.

In February 2013, an expert panel concluded that, in fact, conditions could be stabilised sufficiently for investigators at least to explore the drift access tunnel as far as a rockfall some 2.3 kilometres from the mine entrance—still some 300–500 metres from the mine workings where the remains of the miners are believed to be located. The government committed $7.2 million to a seven-stage re-entry plan.

The following October, a heavy-lift Air Force helicopter began lifting debris and equipment away from the top of the mine ventilation shaft. By April 2014, $4 million later, that shaft had been plugged, and new boreholes drilled. A camera had been lowered into the main access tunnel.

What remains is to plug the tunnel with cement foam, then pump inert nitrogen into the void to create a chemical barrier. Fans would then ventilate the tunnel with fresh air, allowing investigators as far as the rockfall, though not as far as the remains of the lost workers. But the probe has stalled. In August, citing “potentially fatal risks”, Solid Energy told the victims’ families that several “outstanding matters” must be addressed before it would consider putting more lives in jeopardy.

The following month, the state-owned coal miner made a statement to New Zealand Geographic:

“The project we are doing deals only with the 2300-metre-long access tunnel. From the beginning, we have consistently said that we see no safe or feasible way of getting into the former mine workings. The company has never contemplated going any further than that.”

The victims’ families were incensed to learn the same month, however, that WorkSafe New Zealand and the Mines Rescue Service had given Solid Energy a green light to enter the access tunnel as far back as October 2013, stating that it was “technically feasible”.

But the company stood its ground, reiterating that it would not put more lives at risk in what it still considered a hostile and unstable environment. In particular, it pointed to the fact that Pike River still had only one way in or out, and that a major geological fault passed through rock already fractured after four explosions. “You look at all that, and it would be just foolhardy to say this is a simple rock tunnel,” said CEO Dan Clifford.

It was revealed recently that in August, WorkSafe staff had ventured 170 metres into the access tunnel, as far as the seal. Mines Rescue Trust chairman Dave Stewart duly told Radio New Zealand his personnel were good to go, single entry or not: “One way in and one way out— that’s the nature of how we operate. We have always been ready to go; that’s the nature of what we are here for.” But if Solid Energy insisted on building a second escapeway, he said, re-entry was probably impossible. 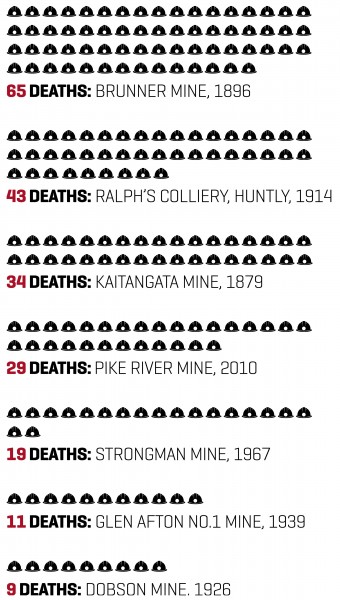 Solid Energy’s board was set to announce a final decision towards the end of October, but have indicated that, on current advice, they could not responsibly consider re-entering the mine.

Pike River coal mine remains a crime scene. Nobody has been held responsible for the tragedy, and while the police have abandoned a manslaughter case, the file remains open. Nevertheless, the victims’ families have steeled themselves for the likely possibility that Pike River will be sealed forever, along with any forensic evidence. They can take no comfort from the fact that, out of four coal-mine explosions in Queensland in the past three decades, bodies were only ever recovered from one.

Pike River Mine produced just 60,000 tonnes of coal—a yield that the Commissioner for Mine Safety and Health for Queensland, Stewart Bell, described as “the most expensive coal in the world when you add the cost of 29 lives”.