On September 14, 2007, a Soyuz-U rocket seared the sky above the Baikonur Cosmodrome in Kazakhstan. It bore a robotic spacecraft, the Foton-M3, which would investigate microgravity in the Earth’s orbit. Foton-M3 carried the very latest in telemetric data-gathering technology. It also carried some tiny passengers—Richtersius coronifer and Milnesium tardigradum—commonly known as water bears.

Water bears, or tardigrades, are microscopic, eight-legged creatures found across the planet. You’ll discover them on mosses or lichens, in dune sands and soils, and they throng in freshwater sediments—25,000 of them might occupy a single litre.

Foton-M3 orbited Earth 189 times, exposing the little water bears to the desiccating dry of deep vacuum (an ambient pressure of just 0.00001 Pa, compared to 100,000 Pa on Earth) and withering blasts of ultraviolet radiation.

When the craft returned after 12 days in space, K. Ingemar Jönsson, a researcher in the department of mathematics and science at Sweden’s Kristianstad University, expected to find the bugs dead. Many were, but to his amazement, of the water bears that had survived, some were about to breed.

The tiny battlers are what biologists call extremophiles, which is to say they endure conditions that would kill almost everything else. Tardigrades can go almost a decade without water. They’ve survived being frozen at minus 273°C—absolute zero—or baking in 151°C. Jönsson’s experiment showed some can recover from exposure to 1000 times more radiation than other animals. In short, wrote Jönsson, they challenge “the traditional concepts of life”. 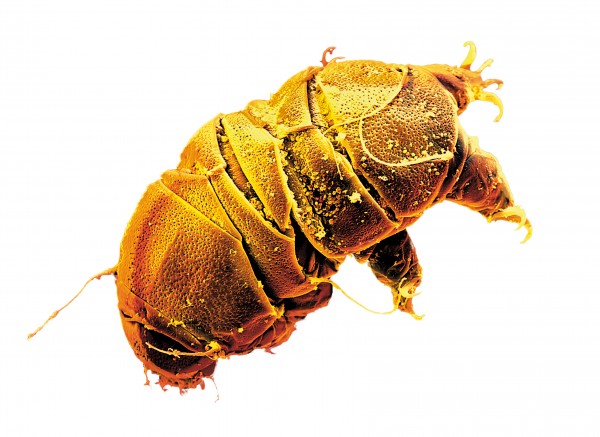 Perhaps the most orthodox of those tenets is that all living things must either fix their energy from the sun, or get it by eating something that already has: grass photosynthesises, lamb eats grass, you eat lamb.

But in 1977, the pilots of a deep-diving submersible discovered a kind of hell where conventional wisdom failed—deep broiling fields of hydrothermal vents clustered about rifts in the Earth’s crust. Water, superheated up to 300ºC, roars from such vents, and only the crushing weight of seawater at nearly 2.5 million kilograms per square centimetre keeps it from turning to steam. The scalding plume carries dissolved minerals from the very crust of the planet—mostly sulphides of zinc, copper and iron—that build elaborate chimneys ocean geologists call black smokers.

If the explorers were awed by the environment, they were dumbstruck by creatures that had found a way to live in that ineffable abyss. Giant tube worms, clams, shrimps, eels, Pompeii worms, barnacles, clustered just centimetres from death by boiling, were flourishing where sunlight couldn’t possibly reach. We later came to understand that they were all supported instead by tiny extremophile bacteria. Not only are these organisms unfazed by the highly toxic hydrogen sulphide spewing from the smokers, they chow it down, converting it to energy and organic matter through chemosynthesis.

Billions of such bacteria live inside each giant tube worm, which sports bright plumes, red with haemoglobin. The haemoglobin absorbs the hydrogen sulphide and passes it to the bacteria. Once the microbe has done its alchemy, it nourishes the worm with carbon compounds in return. Everything else around the vents mostly lives, in one way or another, off the tube worms.

In such uttermost places, basic works best. Most extremophiles are either algae, bacteria or the similar, but distinct, archaea. They get by on recycled carbon, nitrogen and sulphur in some of the most punishing environs on the planet. Archaea live in oil wells, steaming geysers, hot springs (Methanopyrus kandleri Strain 116 grows at 122°C—the highest known temperature of any organism), salt lakes or highly acid solutions. Picrophilus torridus thrives at pH 0: like living in concentrated sulphuric acid.

A bacterium found in 2500m of water near a black smoker off the Mexican coast has learnt to use the very faint glow from the smoker to photosynthesise—the first known organism to utilise light other than sunlight. 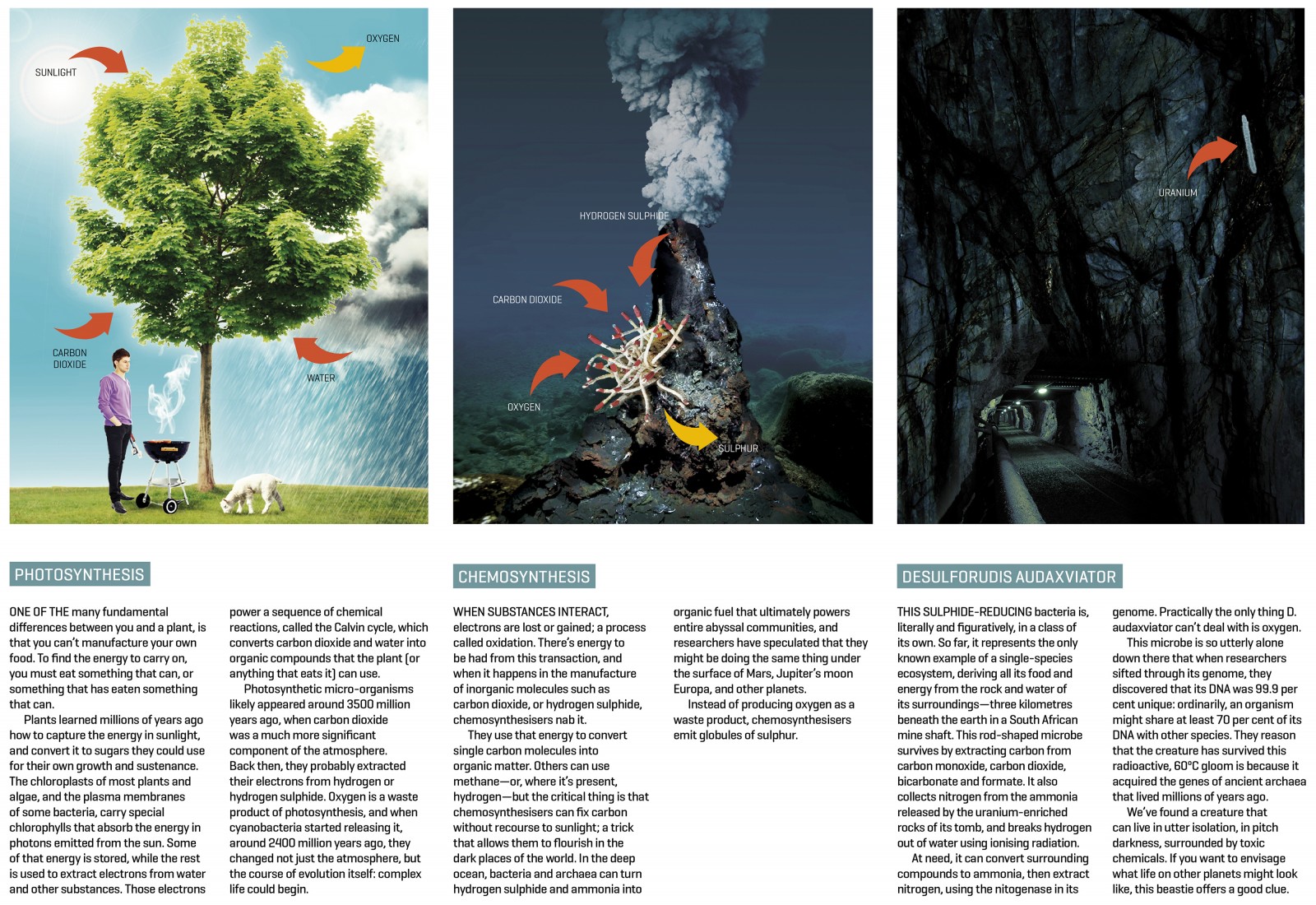 Every creature on Earth relies, to some extent, on others. Any student recognises this interdependence as an ecosystem. But more than three kilometres below the planet’s surface lives Desulforudis audaxviator, maybe the only truly self-contained life form. In a South African mine shaft, researchers found Desulforudis gleaning energy from the radioactivity of uranium-containing rocks. Like Simon and Garfunkel’s insular “rock”, it has no need of friendship—it can metabolise everything it needs from mineral and gas.

Then, late in 2010, submariners discovered a still more resourceful creature: the archaean Thermococcus onnurineus NA1, which survives on formate, the anion left behind when formic acid loses a hydrogen ion. Until then, nobody believed any living thing could get by on formate—a precarious existence on the brink of energetic death. Thermococcus added yet another way—the simplest yet known—for life to promulgate.

None of this could happen without some remarkable physiological gymnastics. “Snow” algae somehow grow even when surrounded by ice. Some depress their own freezing point by metabolising sugars or alcohols. Others produce special “anti-freeze” proteins, which they excrete to inhibit or modify the formation of ice crystals around them.

At the other extreme, thermophilic algae colour our thermal pools with vivid hues, revelling in temperatures up to 80ºC.

Microbiologists debate whether these creatures actually prefer such brutal conditions (indeed, some need them to grow) or simply tolerate them. Experiments have shown that, given a choice, some will back away from maximal conditions, even though they can survive them, opting for a less risky life when they can.

In fact, you might question whether some are really living. Water bears survive those hideous conditions—sometimes for years—only by suspending their metabolism, entering a state called cryptobiosis. The animals’ metabolism slows to less than 0.01 per cent of normal, while their bodies dry out to just one per cent of their normal moisture content to ensure organs aren’t destroyed by the expansion of freezing. A special sugar, trehalose, protects body membranes from damage.

All these nifty sleights of chemistry haven’t gone unnoticed by bio-pharmers and geneticists. Replacing water with sugar solutions, for instance, may find an application in the manufacture of “dry” vaccines that only reactivate once they’re injected into the body. This would drastically reduce our present dependence on refrigeration, a scarce and unreliable utility in the very places that most need vaccines.

Decades ago, a tiny microbe, Deinococcus radiodurans, staggered food technicians by surviving in cans of meat they thought they’d sterilised with blasts of gamma radiation. The practice was more than enough to destroy the DNA of other bugs, but within hours, Deinococcus was happily replicating as though nothing had happened.

Only now do we understand that this bacterium can repair its own DNA and bounce back from doses of radiation 500 times greater than those that would kill a human.

In the lab, scientists at France’s public biomed agency INSERM watched fascinated as Deinococcus synthesised its own DNA, using each shattered fragment as a template. By removing damaged ends, then overlapping with another fragment with matching nucleotides, the DNA strand re-extended, powered by a special enzyme known as PolA.

Then, faster than the bug’s normal replication, the single, repaired strands bonded with complementary strands to resurrect complete chromosomes. “Once the chromosome is functional, the synthesis of all cellular components starts, and the cellular life is back,” marvelled project leader Miroslav Radman.

It’s the enzymes in extremophiles that most excite researchers. Radman speculates that Deinococcus may one day show us how to repair damaged neurons in humans.

Other extremophiles may help us to combat climate change. In 2009, researchers from GNS Science found a bacterium in the hellish acidic cauldron of Tikitere geothermal field, near Rotorua, that uses methane as an energy source. The creature, and its methanotrophic ilk, could potentially be put to use cutting methane emissions from agriculture, landfills or geothermal power stations.

Extremophiles’ bizarre metabolisms may also hold the key to the cheap production of biofuels. At present, a major hurdle is the cost and sheer labour of turning some wood waste into ethanol, but we may be able to make a hydrogen-generating extremophile churn out biohydrogen instead. Microbiologists have already sequenced the genome of Syntrophus aciditrophicus, a bacterium which scrapes a living from fatty acids in organic matter—a unique talent, as far as we know. To do so in an environment without oxygen, it must employ a trick called reverse electron transport, a reaction that produces hydrogen. If scientists can understand Syntrophus’ metabolism, we might learn how to make biohydrogen without resort to fossil fuels—a vexing own-goal of current hydrogen production.

Beyond their relevance on Earth, extremophiles offer us a pretty good identikit for the search for life on other planets. Their remarkable adaptability—their sheer endurance—makes them ideal pioneers. Don’t be surprised if they got to Mars before us.