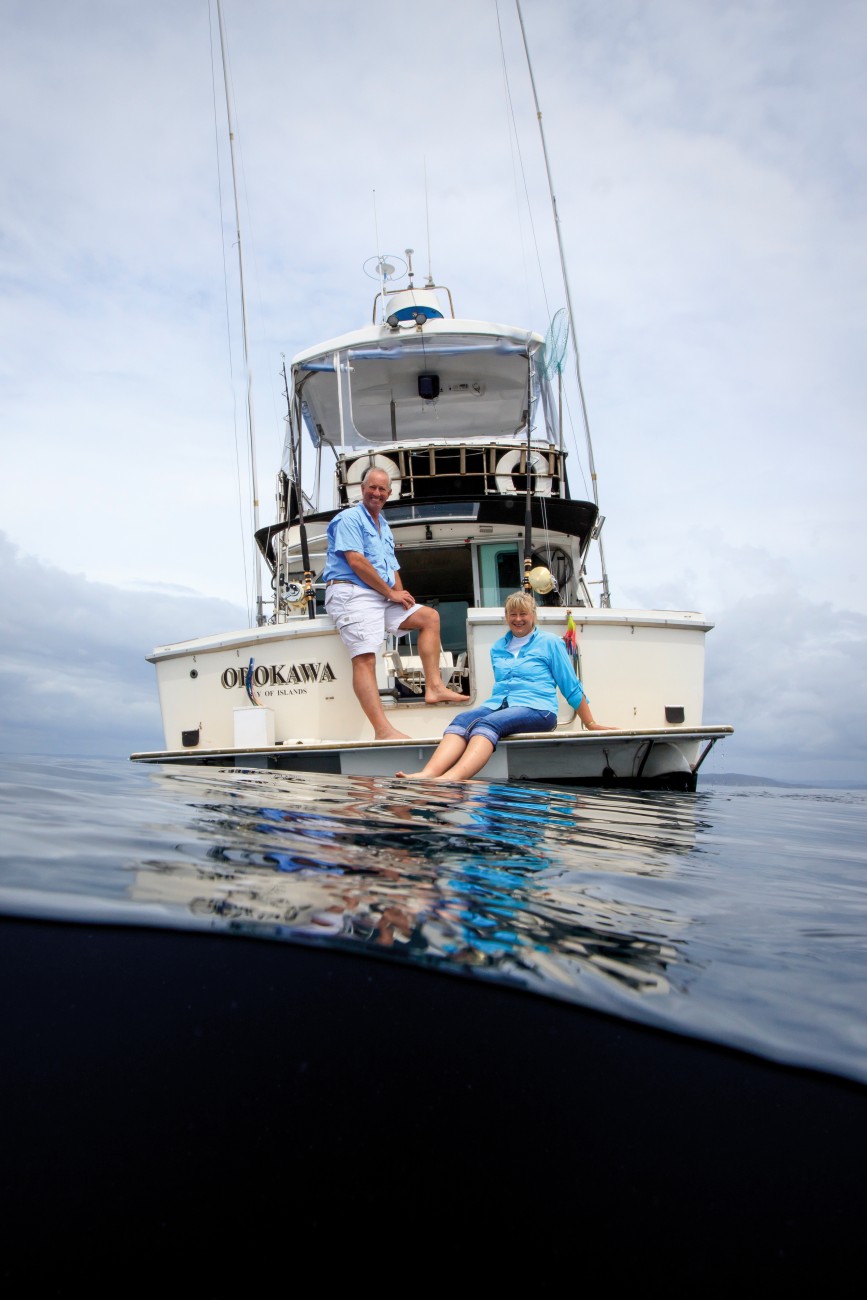 Scott and Sue Tindale hold more fishing world records than the rest of the anglers in New Zealand combined. The couple, married for 25 years, are masters of their craft, and the first and only New Zealanders to receive a Lifetime Achievement Award from the International Game Fish Association (IGFA).

“We’re the only ones outside the Americas with over 100 records,” says Scott. “The closest in the whole of Australasia is another pair of keen fishermen, and they’ve got about 20 between them. Sue and I have over 250.”

The records range across weight, species, location, tackle and more. But the certificates, around 150 of which line the opening passageway in the Tindales’ home in Dairy Flat, Auckland, represent only a small portion of a lifetime of dedicated fishing.

“I was basically born on a boat,” says Scott. “My grandparents on both sides owned fishing lodges so I was always out there doing it.”

“Sue was more of a country girl. Her family introduced me to hunting, but I told her if she wanted to see me around, she’ll need to learn to fish, because I’ll be out on the boat.”

The Tindales began their world record hunt almost out of necessity, dissatisfied with the club politics and general inefficiency of record-keeping in New Zealand.

“We wanted to put a kahawai in for a New Zealand record, and our club wouldn’t weigh it because it wasn’t a marlin, so we ended up going to a rival club and weighing it there,” says Scott. “Typical tall poppy stuff. We applied for the record and they came back and said, ‘Well, it’s actually big enough to beat the world record,’ and it did. But the New Zealand organisations weren’t able to keep up with the number of local records we began sending though. Eventually we thought, ‘We’ll just apply for world records.’”

As expert anglers, the couple prefer chasing larger catches on smaller line, relying on their skill and dexterity over brute force. Many of their records are for bringing in fish weighing anything from five to 30 times more than the breaking strain of the line.

“It’s 90 per cent skill and 10 per cent luck,” says Scott. “And it’s very much about fine-tuning your equipment so that there’s no jerking, no snags in the line. It also requires very fine boat-handling skills, and you need to be able to feel the line, to make your arm part of the rod, so if the fish changes direction, you’re not going to snap the line.”

There have been times when the method has seen potential world records slip back into the depths. More often than not, however, the couple get their fish. In 2012, at an IGFA ceremony in Florida, Sue was named top female saltwater angler. Scott picked up the top guide and captain award at the same event, captaining all but one of Sue’s records. The Tindales’ reputation is such that they have been commissioned by scientists, museums and universities in New Zealand and around the world.

“We’ve been involved in over 60 scientific research studies,” says Scott. “That’s everything from satellite tagging through to collecting specimens for NIWA, Department of Conservation, Ministry for Primary Industries and basically every university in New Zealand. It can even get as weird as collecting parasites out of shark guts.”

(Scott has also been generous in his support of New Zealand Geographic—most notably for stories on blue and mako sharks in issues 121 and 135 respectively, and an upcoming feature on tuna.)

But the volunteer work is more than just another chance to get out on the water. The Tindales have a firm commitment to conservation and ethical fishing, even meeting with lobby groups and government agencies in a voluntary advisory capacity.

“We refuse to buy fish in restaurants or any fish products, period,” says Scott. “I’ve been to several meetings with lobby groups against overfishing and that sort of thing, three hundred people present, and the menu is all seafood. I was the only one in the whole building who ordered the ham steak.”

Scott even goes as far as de-barbing his hooks, which are also circular to avoid an accidental gut-hooking, a method he has recommended to the New Zealand Sport Fishing Council.

“You don’t need barbs,” he says. “They’re for people who don’t know how to fish.”

Whether or not barbless fishing on a fragile line is realistic for the average fisherman, it’s certainly indicative of Scott and Sue Tindale’s mentality.

“I’ve caught 400-kilogram bluefin tuna, I’ve caught sharks and I’ve caught nearly every fish in New Zealand,” says Scott. “But the most memorable catches, the most heartfelt, are when a fish has put up a great fight, they’ve jumped out of the water, they’ve fought hard, but we got them on the boat, weighed them, and then let them go. That’s a real feel-good thing.”