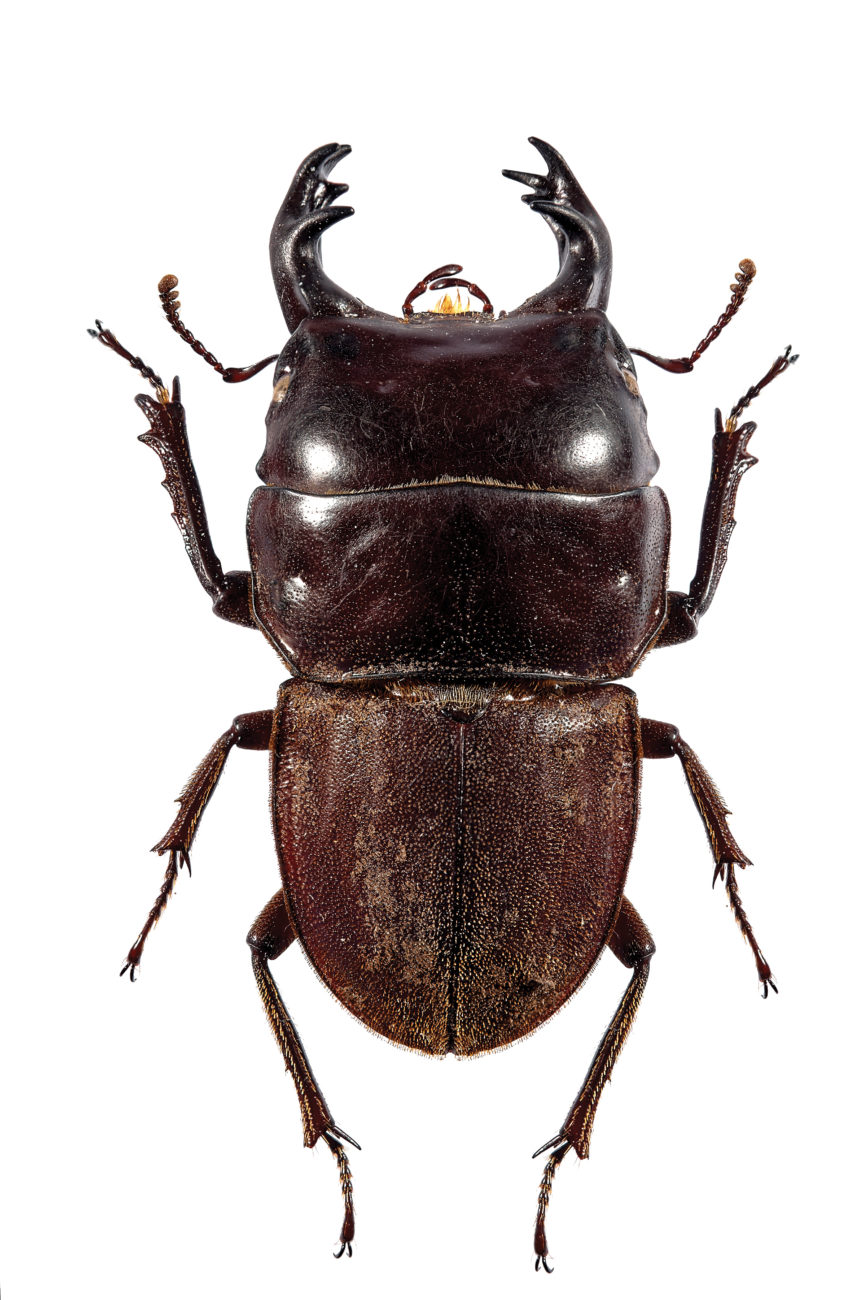 Some people at the Department of Conservation did not want us to tell you about the Mokohinau stag beetle featured in this issue of the magazine. This is why we’ve decided to do so.

There have never been many stag beetles on the Mokohinau islands. A lone species has been having a rough time out there, clinging on, somehow managing to survive. Researchers have never seen more than 10 of them at once. The beetle is considered so critically endangered that, in the words of Auckland Zoo reptile and invertebrate expert Don McFarlane, “there needs to be a new version of the word critical”. Their plight is beyond critical.

McFarlane’s enthusiasm for the beetle is infectious. I first heard him talk about it when I was working with him on a completely different story. The way he describes the beetle, it sounds like a living marvel. It’s the crazy, far-off relative of the Geodorcus stag beetle family, the wild loner living on a rock in the sea. I wanted to see its knobbly jaws for myself. Then I wanted everyone to see its knobbly jaws.

Beetles are the underground workers of our ecosystem, part of the extremely complicated clockwork that keeps our wild habitats ticking along nicely. We don’t know what will happen as more and more of these species disappear. We have a whole taxon of Geodorcus beetles that dispersed across the country and became slightly different from each other, depending on the environments they found themselves in. We don’t know a whole lot about some of them, either.

McFarlane is still reeling from the results of the survey. They’ll need to go and take another look, but fellow searcher, ecologist Greg Sherley, is also feeling pessimistic. He’s looked for these beetles before, and found them straight away, at the same time of day and year as this survey took place.

Beetles take a long time to become beetles: they spend most of their lifespan as larvae, buried, usually in rotting wood. We don’t know if any larvae still lie in wait on the Mokohinaus. “We’ll never know for sure unless we keep looking, and keep looking long after I’m dead,” says McFarlane.

Sherley is worried that, even if beetles remain, there may too few to save the species.

Those at DOC who opposed this story did so because they believe publicising the beetle increases the poaching risk to it. But it’s a bit late for poaching.

The risk of theft seems like a good reason to start measures to protect the beetle. Though a plan for saving it has long existed, it is only just beginning to be put into action, and in large part due to volunteer effort. Ian Stringer and Greg Sherley, both retired from DOC, paid their passage on the survey and donated their time.

We believe it’s important to tell you about this beetle, that it’s special, and that it’s possible for you to advocate for its preservation.

You deserve to know that there was a beetle we could have saved—and that we might still save, if we’re lucky. You deserve to know that the cost of conservation budget cuts is paid in beetles. That species are blinking out around us, unknown, unpublicised. You need to know because you vote for these things. In 2009, DOC’s budget was cut by $54 million over four years—particularly bad news for those DOC staff who are enthusiastic about beetles and advocate for their protection.

Beetles need help, and not only from technical experts figuring out how to get them to mate in captivity. They need your help, too.