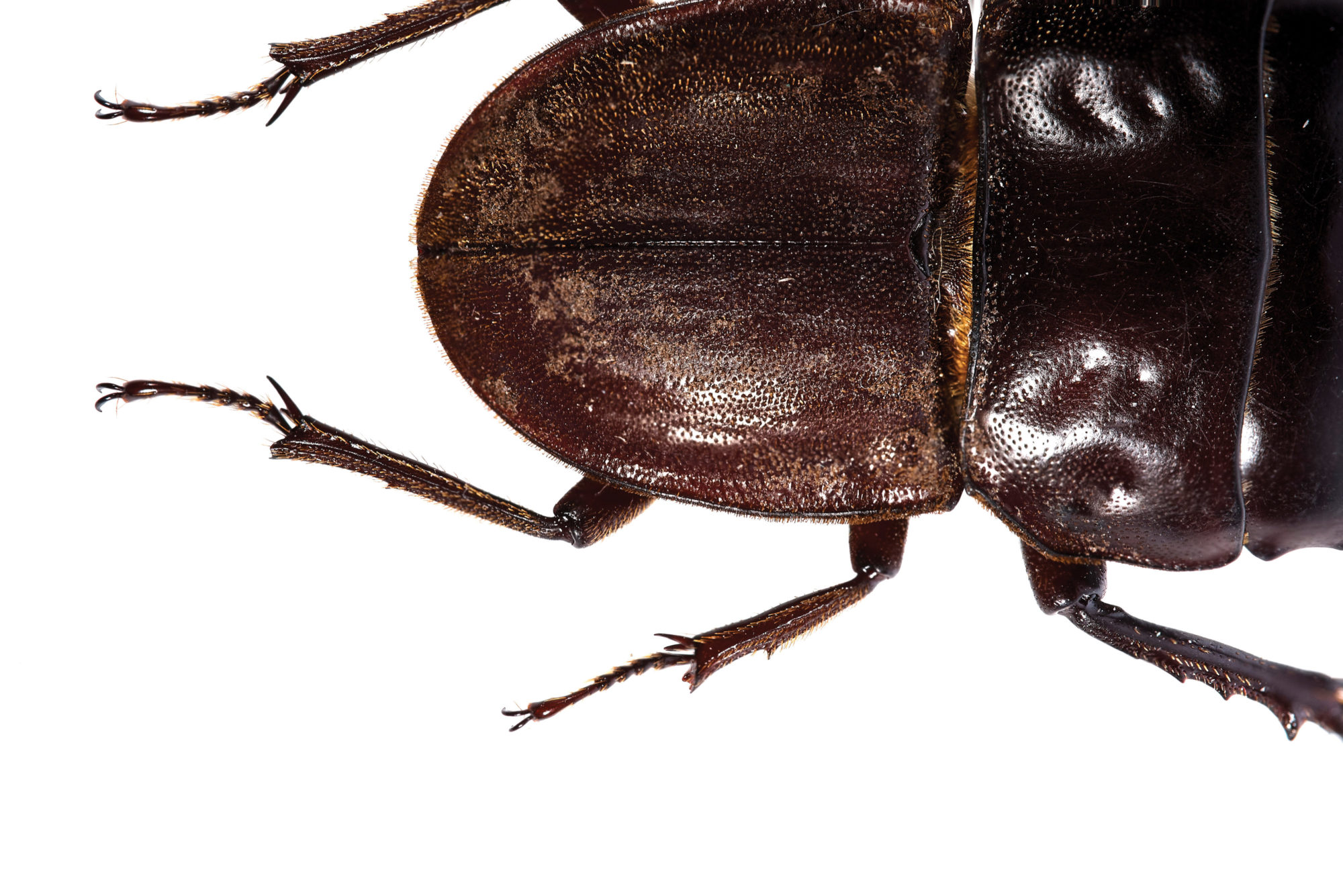 On a fine summer’s day, three men set off in a boat from Kennedy Bay to look for beetles. They leave the Coromandel Peninsula behind, cruise past Great Barrier Island, and then the landforms recede into the distance. Their destination: a tiny rock stack so small and obscure it doesn’t have a name. Their quarry: Geodorcus ithaginis, the Mokohinau stag beetle, which may or may not exist.

The beetle hunters are Don McFarlane, a reptile and invertebrate expert from Auckland Zoo, and entomologist Ian Stringer and ecologist Greg Sherley, both retired from the Department of Conservation and both paying their own way to join the search.

The islands are the crumbling remnants of a volcano, and only a handful of them have names. A lighthouse once stood on the northernmost one, Burgess Island, and in the 1880s, its assistant lighthouse keeper was the first person to find the stag beetle and keep a record of it.

Andreas Sandager collected 130 species of beetle while he was stationed on the Mokohinaus, a third of which were new to science. On one trip to Lizard Island, he found a female stag beetle and fragments of a male.

More stag-beetle fragments were collected by an entomologist in 1902, and then the beetle disappeared until 1984, when the Auckland University Field Club went looking for lizards and found a male stag beetle instead. 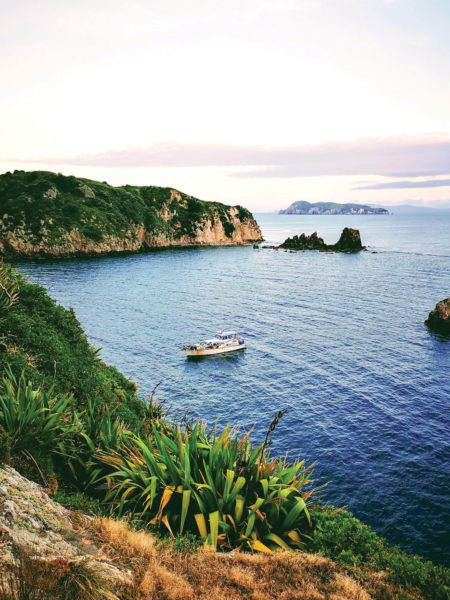 That’s when Greg Sherley first joined the search. In the early 1990s, he took part in a DOC survey, which managed to find three live stag beetles on a rock too small to call an island (they referred to it as Stack H instead) but none anywhere else.

After the survey, DOC decided to translocate beetles to a second island. But this never happened. Another visit to the Mokohinaus in 2008 made it clear that there were too few beetles left. “We really couldn’t harvest live beetles from Stack H without endangering the population,” says Sherley.

So he changed focus: he would breed beetles in captivity first. He visited successful insect-breeding programmes in Australia for tips. Then he and Ian Stringer retired, and everything stalled.

A lump of rock sticking out of the sea, Stack H is protected by 30-metre cliffs. The cap of scrubby vegetation on top is like a badly fitted toupee. It’s inhospitable enough that, unlike all the other islands in the Mokohinaus, it has never had kiore—Polynesian rats.

It has been 25 years since Sherley’s last beetle search, but he still knows where to go—a stunted pōhutukawa tree. The last beetles he saw were living here.

“They’re a beautiful animal,” he says, affection in his voice. “A remnant of ancient New Zealand. They have a quaintness about them.”

Before rats arrived, the stag beetle probably lived on islands throughout the group, and possibly the mainland, too.

Almost nothing is known about this beetle—not even its preferred habitat. It it has been clinging to life within tussock grass and under stunted shrubs, but it may well like mature forest better. The larvae of other stag beetle species burrow into rotting tree trunks, which are pretty scarce on Stack H. They can remain buried for years before pupating.

The team uncovers a few disembodied parts: mandibles, some wing covers. (The mandibles of G. ithaginis have a distinctive extra tooth, a dead giveaway.) Are these fragments from a beetle that died last week, or years ago? Beetles are durable, so it’s impossible for the searchers to tell.

“It felt like a tease,” says McFarlane. He’s hoping to resume Sherley’s plan of breeding the beetles in captivity, at Auckland Zoo. It’s a tricky ask, as nobody has tried it with this beetle, but McFarlane has figured out how to breed endangered invertebrates before—Partula snails at London Zoo.

But to do that, he needs beetles.

As the hours pass, Sherley feels a sense of growing dread. Everyone, including the boat’s skipper, searches—on hands and knees, turning over rotting timber and stones, digging into the few centimetres of soil clinging to the rocks—while at the same time trying not to destroy the fragile habitat.

Over the next three days, hearts sinking, the team cast their net wider: they set up a GoPro camera overnight with a lure. The beetles are nocturnal, after all—perhaps they’ll emerge after dark.

They survey the vegetation on Stack H with a drone, making a high-resolution map of what may be suitable beetle habitat. The rock stack turns out to be 3500 to 4000 square metres in size, or less than an acre—a tiny area to house an entire species. They also search the neighbouring stack, and Lizard Island, where the beetle was first discovered. The Mokohinaus have been rat-free for 25 years now—perhaps a few beetles squeaked through?

“We looked harder and harder—and found nothing,” says McFarlane.

And not for want to trying, says Sherley: “We would’ve put in about ten times more search effort on this trip than we’ve ever done before.”

Did someone else get there first? Entrepreneurial collectors are one threat to endangered invertebrates. There’s a black market in rare stag beetles, which are worth good money—$500 to $1000.

“Rarity puts a price on their heads,” says Sherley. “A poacher’s objective is to make a target species go extinct.”

Keeping beetles as pets is a huge business in Japan and Taiwan, and stag beetles, or kuwagata, are especially popular: they don’t take up much space, and eat apple slices.

“You can put money into a vending machine in Japan and get a stag beetle out,” says DOC entomologist Eric Edwards.

Edwards recalls getting a call a few years back from a person who said they were a student, asking for information about the exact locations of rare New Zealand invertebrate species. Edwards was suspicious.

DOC was so worried about beetle poachers that it asked for the reference to Stack H to be removed from the Mokohinau stag beetle’s Wikipedia article. It was added back the next day by someone who pointed out the location was public knowledge. In fact, detailed directions to the exact spot where the beetles were previously found are still listed in a conservation status report on DOC’s own website.

But it’s impossible to say if anyone made the long trip to look for trophies, and anyway, almost anything could finish off G. ithaginis. The rest of the Mokohinau Islands were burnt off, farmed, muttonbirded, and infested with rats. Stack H, the beetle’s last refuge, escaped that fate, but a tiny habitat is ridiculously vulnerable: a drought, a fire, a single rat escaping from a moored boat, and it’s all over.

It takes 50 years without a sighting to declare something extinct, but invertebrates are tricky cases. Titanomis sisyrota, or “New Zealand’s most enigmatic moth”, according to lepidopterist Robert Hoare, has been seen only ten times, mostly in the 19th century, and not at all since 1959. Nobody knows what its habitat is or what its caterpillars might eat. It has (or it had) a huge natural range, and with a six-centimetre wingspan, it’s conspicuous. Surely if it was still alive, we’d have seen it? But there are only a handful of moth experts in New Zealand, and a lot of ground to cover.

The official extinction criteria can’t cope with insects, which can remain undetected for decades, then pop up again.

Beetles spend more time as larvae than as beetles, and since we don’t know how long the Mokohinau stag beetle’s larval stage lasts for—whether it’s measured in weeks or years—we don’t know whether there are new beetles yet to emerge.

The Southland jewel chafer beetle Stethaspis pulchra hadn’t been seen for 50 years when it was rediscovered in 2005. At the end of an expedition to find it in the remote Umbrella Mountains in Southland, Eric Edwards and his team were getting back into their vehicles when Edwards’s six-year-old son, Alex, picked a beautiful metallic-green beetle out of a puddle.

The stag beetle isn’t the only invertebrate to be precariously clinging onto a tiny habitat. One of our most endangered insects is the weevil Lyperobius nesidiotes, which seems to be dependent on the rare herb Anisotome acutifolia, which grows only on the subantarctic Snares Islands. The weevils have only ever been found on a patch of Anisotome about two metres square, a habitat that makes Stack H look luxurious, and nobody’s seen them since the 1980s.

Some invertebrates have teetered on the edge of existence, only to return safely. The Mercury Islands tusked wētā was on the brink of extinction in the 1990s when DOC managed to rescue a male and two females just before it disappeared from the wild. A team including Ian Stringer bred hundreds of tusked wētā in captivity (in ice-cream containers) and released them back onto the newly rat-free Mercury Islands, saving the species.

Why wasn’t the same done with the Mokohinau stag beetle?

There’s been a plan in place for years, not yet actioned: figure out how to get a different stag-beetle species to breed in captivity—Helms’s stag beetle, perhaps, which is less rare—before having a go with G. ithaginis.

But in 2009, the government cut $54 million from DOC’s budget. After Sherley and Stringer retired, they weren’t replaced, and today, there are only three entomologists left at DOC, with thousands of species to monitor.

Edwards jokes that we need a volunteer force, a “retired biologist club”, which, like Sherley and Stringer, could travel around New Zealand surveying habitats and searching for vanishing species.

Everybody loves a kākāpō, but rare beetles don’t go viral on YouTube, or have their own social media accounts, or get a $1 million rescue budget.

Stag beetles aren’t cuddly enough to be plush toys. Te Papa’s Colin Miskelly puts it bluntly: “Trying to get community buy-in for protecting the Open Bay Islands leech—it’s just not going to happen, because who gives a stuff about a leech?”

The right advocacy may be a matter of life or death. Beetles, not birds, are on the front line of the global extinction crisis. The majority of New Zealand’s threatened species are invertebrates and plants.

As far as Shirley is concerned, this is still unfinished business.

“We need another visit.”

Beetles in a suburban environment