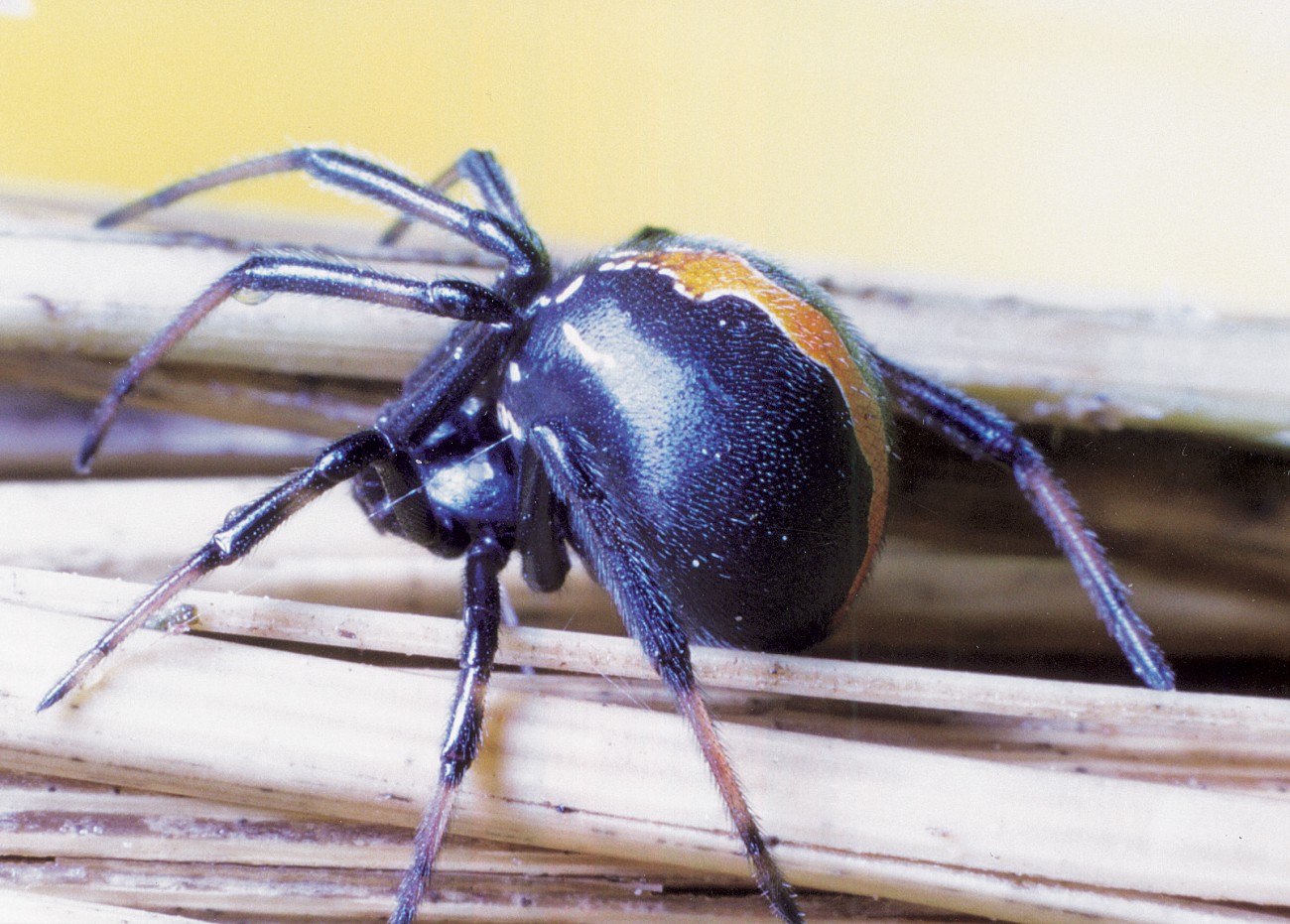 At the end of February 2004, the tail of Cyclone Ivy whipped into Papamoa Beach in the Bay of Plenty, transforming the sea into a grey cauldron of foaming currents and swirling debris. As monstrous waves slammed into the coastline, some feared not for houses, but that the storm would wipe out one of the last strongholds of New Zealand’s most venomous native spider.

“Katipo are threatened with extinction. Their decline may seem incremental against normal time­lines, but it is dramatic in geological terms,” says Brian Patrick, entomolo­gist and manager at Otago Museum. In an extensive study of the red katipo completed in 2002, Patrick failed to find the spider at 72 per cent of sites where it had previously been recorded. Grace Hall, arach­nologist at Landcare Research in Auckland, tells a similar tale. “They were once common around Auck­land beaches such as Muriwai and Port Waikato. Now I doubt that any remain near Auckland, and I’ll be lucky to find one in a place as quiet as Foxton.”

Katipo belong to the genus Latrodectus—widow spiders. Two endemic species, L. katipo and L. atritus, known as the red and the black katipo, are now recognised. “Anatomically they are identical,” says John Early, Auckland Museum entomologist, “but they differ in distribution and colouring. Black katipo occupy the northern half of the North Island. Red katipo occupy the remainder of the country, with the exception of the deep south, but there is some overlap.”

The iconic female red katipo has a silky, ebony-coloured, pea-sized abdomen marked by a crimson dor­sal stripe like a lightening bolt and an hourglass-shaped marking on the underside. The female black katipo lacks the stripe, and her hourglass is faint. Adult males—only one-sixth the size of females—are white with a dorsal pattern of red-orange dia­monds bordered by black lines.

Katipo live for a year. Mating takes place between November and December and the female then hangs three or four silken sacs, each containing as many as 90 eggs, in the centre of her web. As the wind blows, sand adheres to the sacs, forming a protective shell. When the eggs have hatched, each spiderling spins a length of silk with which to catch the wind and waft away.

Katipo are only found near the seashore, where they favour the sheltered side of dunes. They colo­nise low-growing shrubs and rushes, sun-warmed tin cans and driftwood, but their preferred home is the base of endemic grasses such as pingao (golden sand sedge), kowhanga­tara or spinifex (silvery sand grass), sand coprosma and sand pimelea. Eschewing dunes densely overgrown with marram, kikuyu, lupins or buf­falo grass, they construct their snares over open sand. Beetles quickly be­come trapped in the sticky strands, allowing their captor to encase them in silk and inject them with venom.

Katipo venom is potentially lethal to humans, earning the diminutive creature its Maori name, which means “night stinger”. “The two spe­cies are equally dangerous,” explains Early, “but the severity of symptoms is related to the amount of venom transmitted to the wound and the victim’s weight, age and general health.” The powerful nerve poison races through the bloodstream caus­ing spasms of pain, malaise, fever, chills, trembling, restricted breath­ing, elevated blood pressure and abdominal cramping. Fortunately, most hospitals stock an antidote and fatalities are rare.

Despite their notoriety, katipo are shy, unaggressive creatures. Only fe­males have the strength to penetrate human skin with their fangs, and they bite exclusively when defending their eggs. “Bites are very uncom­mon,” observes Patrick, who recalls finding beach-goers at Karamea sun­bathing just metres from a red-katipo colony, neither humans nor spiders disturbed by their proximity to the other. It was an unusual situation: katipo generally live in areas unfre­quented by people, who, in turn, tend to steer well clear of poisonous critters.

DOC researchers, led by techni­cal support officer Brendon Chris­tensen, are currently studying the elusive spider in a survey of the Bay of Plenty. “From October to Decem­ber 2004, we completed the first stage, determining the presence of katipo throughout the district’s coast­lines. Initially, we found black katipo only on Matakana Island, but by the end of March we found 34 spiders at four sites on the coast—the Mataka­na Island dunes, Papamoa Beach, Kaituna River-mouth dunes and Maketu sand spit.” The numbers are encouraging, and the study is now measuring the density of spiders at each site. Further work may include research into the resilience and sta­bility of local katipo populations.

At another stronghold, Kaitorete Spit in Canterbury, DOC entomolo­gist Lisa Sinclair and two field assist­ants crawled through prickly pingao and sheep’s burr searching for katipo under every bush. Sinclair com­ments: “Scattered beetle husks indi­cate inhabited lairs. Katipo occupy a shifting mosaic of habitat, and they are fussy so they can just disappear from a site.” The ongoing study, set up last year by an outside consultant, is at the monitoring stage. Sinclair’s outlook? “We’ve started just in time. Unless a flood or storm wipes them out, we have a chance to maintain this population.”

South Island populations are located from Karitane north of Dun­edin to Oyster Bay in Marlborough, and from Nelson up to Farewell Spit, plus a few isolated populations on the northern West Coast. In the North Island, populations have been found around Wellington, on the west coast, in the Bay of Plenty and in Northland. There has been talk of making katipo reserves on Great Barrier Island and Matakana Island, but Christensen says such develop­ments are a long way off and would require the support of landowners and other interested parties. Ac­cording to Sinclair: “There is only so much DOC can do. To save this species, we need the cooperation of the public.”

Unlike their house-dwelling cousins the Australian redback (L. hasselti, established around Wanaka and New Plymouth) and the North American black widow (L. mactans), katipo seem unable to adapt to hu­man modification of their habitat. Another (much more common) coastal arachnid, the South African false katipo, or black cobweb spider (Steatoda capensis), recovers quickly from environmental disturbances, inhabits dense vegetation and repro­duces all year around. But foreign spiders are not actively displacing the katipo. As Early explains, “The redback and black widow prefer different habitats from katipo, and the black widow is not established in New Zealand.” Hall concurs: “False katipo recolonise faster but are not direct competitors.”

Experts agree that habitat destruc­tion is the single greatest factor in katipo decline. If this is true, preserv­ing dune vegetation is the key to pre­venting their extinction. Within the last century, 70 per cent of coastal sand dunes have disappeared, and those remaining have been modified by farming, grazing, burning, off road driving and exotic plants such as marram grass. It is likely that only intervention will save the residue of this delicate ecosystem.

In the aftermath of Cyclone Ivy, locals at erosion-prone Papamoa found sections of their coastline sur­prisingly intact. The Papamoa katipo population was also safe. “Pingao and spinifex held the sand together,” says Greg Jenks at Environment Bay of Plenty.

At the same time, DOC’s Canter­bury conservancy is also planting endemic species on dunes and dis­seminating information. “We cannot actively increase katipo numbers, but we can revitalise their habitat. Pingao planting has been 90 per cent successful,” says Sinclair. Signs re­mind beach-goers to keep to marked tracks. Dedicated groups hold planting days. “The tide is turning, with accretion replacing erosion in many places,” says Jenks. “It makes a fascinating story of community action overcoming the very serious and widespread results of human-induced erosion. We hope that once the native ecosystems have been re­established, native fauna—including  katipo—will again thrive.”