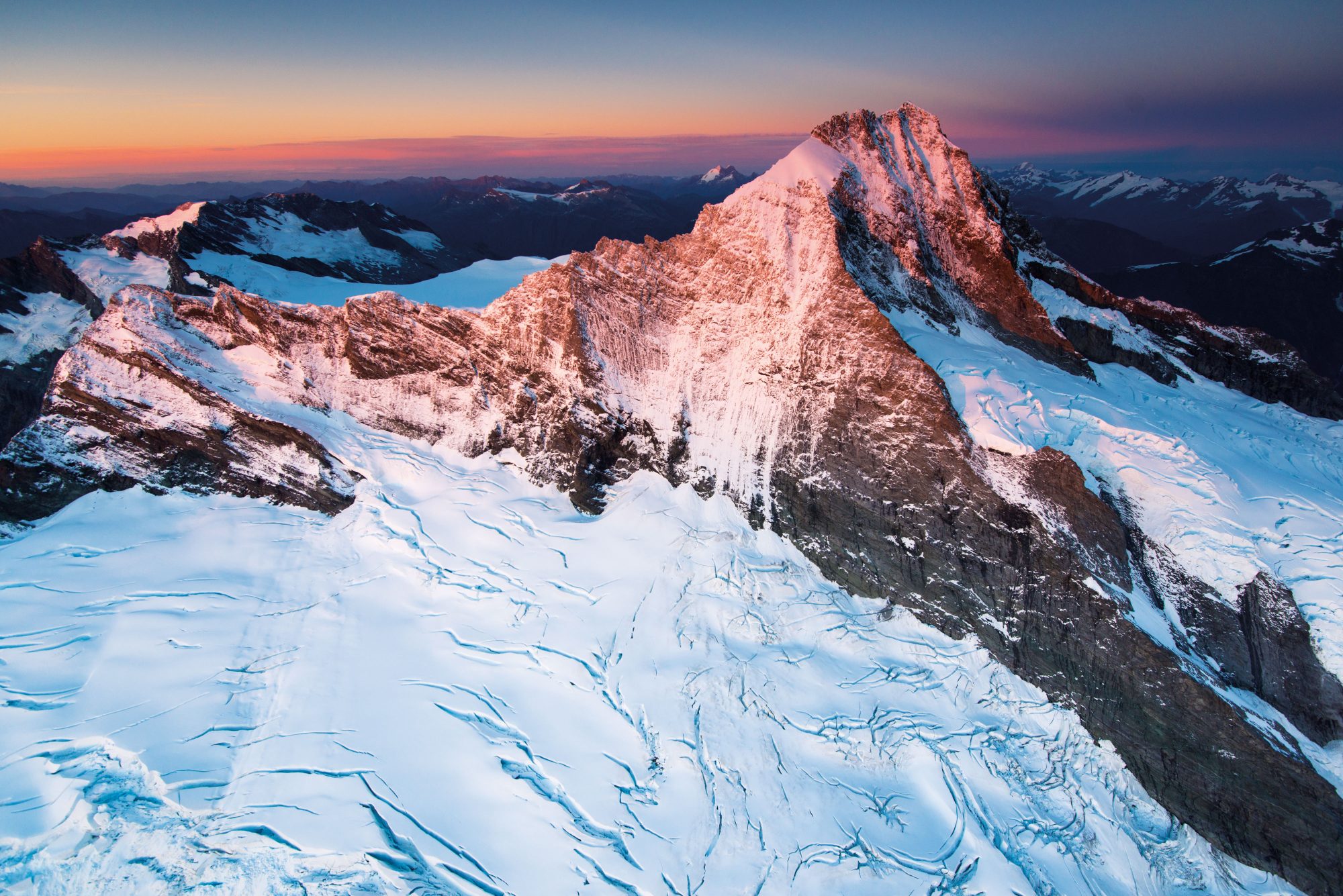 Here is the land of Te Wahipounamu, flotsam from the wreck of Gondwana,where the Southern Alps—Kā Tiritiri o te Moana—heave and lunge in one last bedlam of rock and river before fading into foothills in the country’s far south. This, the South West New Zealand World Heritage Area, is one of nature’s most exquisite narratives, writ in flowing hand—mountains, glaciers, rivers and forest—across 2.6 million hectares of the lower South Island from Fiordland National Park north to Aoraki/Mt Cook and Westland/Tai Poutini National Parks.

The high peaks, cirques and hanging valleys are held aloft by the contradiction of tectonics. Deep beneath, the Pacific and Australian plates shoulder-barge each other as they go their oppo­site ways, hefting monoliths of greywacke and schist skywards to create the comely spire of Mt Aspiring—Tititea, the glistening peak—the Olivine Ice Plateau, the Alpine Fault and the twin peaks of Mt Earnslaw/Pikirakatahi.

Over the ages, these mountains were hewn by glaciers and bloated by West Coast rains that froze into broad snowfields. When the world warmed, the glaciers melted back to leave behind steep-sided valleys. The Matukituki, the Wilkin, the Arawhata, the Landsborough are like basilicas for outdoor enthusiasts, and thousands make their pilgrimage every year, carrying kayaks or crampons, rifles or rods, backpacks or just a good book.

Some follow trails blazed by Māori centuries earlier in their quest for the taonga that is pounamu (greenstone or jade). Pitting generations of knowledge and survival skills against the weather, they ventured into the high places, such as today’s Haast Pass/ Tioripātea, to fossick for the prized stone, which they fashioned into tools of utility or war.

The West Coast offered only an arduous existence—agricul­ture was all but impossible—but pounamu gave Māori something they could trade for the commodities they lacked. They pioneered trails of commerce clear across the South Island from west to east, and from there, up and down the length of the country.

As they went, rangatira exercised their rites of tōpuni, claiming mana over people and places by laying their cloaks over them. Tōpuni still wields authority and protection over three peaks in the park, about which the traditions and memories of Ngāi Tahu are woven: Tititea/Mt Aspiring, Pikirakatahi/Mt Earnslaw, and the trail marker and high sentinel over the pounamu wellspring of Te Korokā/Cosmos Peak, which still carries the mark of early diggings.

The ice ages have passed, and the Carbon Age has begun. More than a hundred glaciers—among them, the Bonar, the Volta and the Therma—still ooze from the flanks of the mountains, but most are wasting, despite an annual boost of eight metres of rain and snow. (Climate change claims around 50 metres of the Dart Glacier every year.) From high snowfields, melt-water falls to the valleys to swell garrulous rivers.

To either side, beech forests have slowly cloaked the screes left behind. In the north, lowland slopes are mostly a monoculture of silver beech/tahina. Further south, where elevations fall and fer­tility rises, they yield to red beech/tawhero and mountain beech/tamauka. Above the treeline is the domain of tussocks and the dwarfish, leathery sub-alpine specialists.

If plant life is difficult up here, it becomes positively destitute within the ‘ultramafic belt’ to the south. Dividing Otago’s schists and Fiordland’s granites, a heavy metal mash-up of magnesium and iron, along with toxic veins of nickel, chromium and cobalt, rises up to stain the Red Mountains and the Red Hills Range. These places are austere plots of stunted, shrubby things; small of leaf and slow to grow.

In the eastern rain shadows of the park the land receives just 300 millimetres of precipi­tation a year, compared to more than 8000 millimetres over the Alps. The result is a mul­titude of solutions to the problem of life­ there are nearly 600 vascular plants and another 70 ferns. At the land’s edge, westerlies bend rimu, and podocarps, normally tall and arrow-straight, are bowed low, pointing the gales’ track to the steeplands beyond, where tracts of mountain conifers—Hall’s tōtara and mountain cedar/pahautea—live long, sluggish lives in the cold air and meagre soils.

At these elevations, the clouds struggle to heave themselves over the divide. Snow can fall on the longest day, and the ice on some peaks never melts. Yet somehow, frail-looking daisies, gentians and buttercups cram their reproductive cycles into what brief windows the elements allow.

Everything has survived by dint of adaptability and grit, prevail­ing through the entombment of the Ice Ages, the land’s ceaseless convulsions, the bombardment of tumbling rocks and the grinding erosion of winds and rain.

But World Heritage status cannot protect it from a warming firmament. Whether it endures the withering of the Carbon Age will be the matter of some future record.

A passion for ice