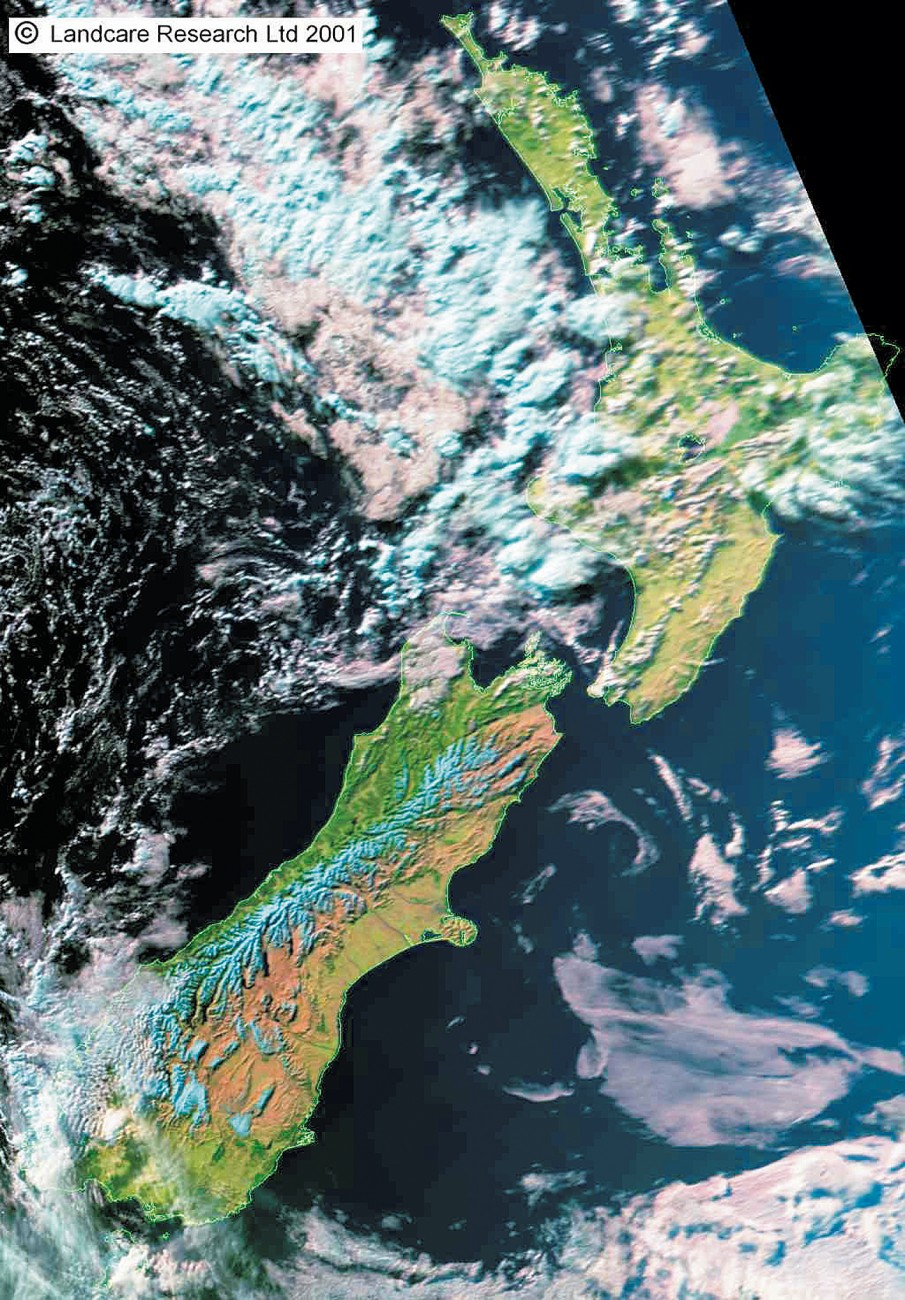 If anything, our fascina­tion for all things meteoro­logical is on the increase. The larger daily newspapers in this country devote a full page, often in colour, to weather, television weather presenters are media celebrities, there is a full-time weather channel on Sky TV, and programmes on “killer frosts,” “monster storms” and the like screen at prime time.

But suppose you don’t take a daily newspaper, can’t catch the daily long-range forecast on the National Programme at 12.30 p.m. and decline to let television interrupt your dinner hour.

No problem. You can get all the weather information you want from the Internet.

One large collection of weather links is to be found at www.piperpat.co.nz/nz/ weather.html, maintained by Pipers, patent and trademark attorneys. Some 120 links are listed—although a few are not weather related, several are duplicated and a sprinkling do not work.

Better maintained and organised are Brian Hamil­ton’s weather links at http:// ps.gen.nz/-windy/links.htm. But the mother lode must surely be Steve Rosie’s collection on http://mysite. xtra.co.nz/-rosies. All the links I tried on this vast and meticulous site proved active.

MetService (www. metservice.co.nz/forecasts/ index.asp) is, as would be expected, a primary site. It carries a wide range of brief forecasts, including forecasts for marine and mountain areas, plus long- and short-range forecasts region by region. A two-week forecast is being trialled. The site treads a careful line between putting up useful material and not undermining the service’s commercial operations, such as Metphone and Metfax. Hence the web forecasts are short on detail and weather maps are absent.

But there is more here than just forecasts. Under the “Observations” tab lie satellite and weather-radar images, both updated at three-hourly intervals. Three sets of radar images covering almost the whole country show rainfall and its intensity in lovely detail, and by looking at a series of images over time you can get a pretty good idea of what moisture is in your vicinity and what might be headed your way over following hours.

Satellite photos are useful for showing the general situation, and also for following the progress of obtrusive features such as tropical storms as they wobble their way over the Pacific. Images are available in infra-red (which shows radiated heat and can be recorded at night), water vapour in the upper atmos­phere and visible light.

MetService’s website also has an educational section which contains general descriptive information about the New Zealand climate as well as such things as monthly mean maximum and minimum temperatures for 31 sites throughout the country. There is also information on meteorologi­cal instruments and a selection of Erick Brenstrum’s weather columns from New Zealand Geographic.

At www.rses.vuw.ac.nz/ meteorology, a site run by Jim McGregor, of Victoria University, MetService’s weather radar images are displayed in more helpful fashion than on MetService’s own site. A worthwhile array of images showing the whole country over the past 18 hours can be viewed simulta­neously. The site also has a variety of New Zealand and Pacific satellite images. Under the heading “Surface Obs” separate maps showing recently measured wind speed, temperature, pressure and rainfall data are available, and selecting “Challenge” takes you to weather maps covering the area through which yachts in the BT Challenge race are passing.

Specialised weather depictions are also available at McGregor’s site. For instance, there are complex plots of temperature and atmospheric energy versus altitude termed tephigrams —of interest chiefly to specialists. More intelligi­ble—and found under the forecasts section—are a series of predicted wind speed plots for the following 72 hours at 12-hour inter­vals. Each is for a different altitude in the atmosphere, with altitude designated by air pressure in hectopascals. One thousand hectopascals means sea level, while 300 hPa equates to the altitude at which jet aircraft fly (11 or 12 km). World Area Forecast System data from the United States is used to prepare these charts, some of which cover not only New Zealand but the whole south-west Pacific.

In conjunction with the Institute of Geological and Nuclear Sciences (IGNS), predictions of precipitable water in the atmosphere are given for a smattering of stations about the country. Intriguingly, this data comes from permanent GPS stations set up to monitor ground deformation as a warning of seismic or volcanic activity.

The University of Canterbury’s geography department (www.geog.canterbury.ac.nz/weather/index.htm) probably has the best collection of weather satellite images available locally, taken by the Japanese GMS satellite and updated every few hours. Also on this site is a link to American NOAA 16 imagery, updated three or four times daily through their agent, Landcare, in Christchurch.

Whereas all the GMS images are greyscale, the NOAA 16 images are richly coloured (though the colours are false, to some extent) and show just New Zealand and a rectangle of nearby surrounding sea at very high resolution. On the other hand, the GMS images show eastern Australia and from the equator to south of New Zealand—or an even wider swathe if you so choose—so you do get a better feeling for the overall weather situation.

Since June 1999, many conventional weather maps have been subject to “user pays” restrictions, so on the Net, where most viewing is free, such maps pose a difficulty.

The Canterbury geography site has a weather charts section, with links to the Australian Bureau of Meteorology, a good source of weather maps that include New Zealand, and also to various US organisations which also gather and interpret weather data for our region. A lot of Australian-New Zealand weather prediction maps are accessible from this site, but they are somewhat technical in nature, and those who wish to explore them would be wise to check the explanatory “key” link that appears below the MRF files.

At www.intellicast.com —apparently an American organisation with connec­tions to purveyors of sporting goods and allergy remedies—one can access detailed forecasts for most places in the world, including some 25 New Zealand locations. What is remarkable here is that they give attractively packaged forecasts for the next nine or ten days. How accurate they might be is anyone’s guess! This is just one of several overseas sites that give information on New Zealand weather. The BBC is another.

A third, and one of the best, is the Weather Underground, found at www.wunderground.com/ global/NZ.html, which carries good current situation reports on 37 New Zealand towns and locations, with predictions for the following few days. It is less detailed than Intellicast, but lacks the advertising.

One of the fascinating things about the World Wide Web is its diversity and the scope it affords for individual expression. Weather sites, no less than any other, reflect this diversity.

Brian Hamilton, whose site I mentioned earlier, is a dairy farmer of Awhitu, near the south head of the Manukau Harbour. He is a weather enthusiast, maintaining his own home-built weather station. More than 20 parameter readings from his instruments are posted on the weather page of his website at no more than hourly intervals, and for some instruments there are graphs giving continu­ous output.

“My dad kept rainfall records from 1962, and I was keen on the weather even at primary school. I used to copy weather maps off TV using a stencil to give me outlines of New Zealand and eastern Australia,” he told me. Hamilton built the weather station 10 years ago and has had a web page with weather data since 1997. But he has gone further than that. He has written a software programme for displaying and processing weather information that is now widely used around the world, for it works with a greater range of small met stations than any other.

“I’m selling a copy a day,” he tells me (see www.weather­display. corn). NOAA, the US’s huge National Oceanic and Atmospheric Administration, has had him produce a simpler version of his software which it is providing to ham radio operators in the US. NOAA would like 5000 to 10,000 operators to be automati­cally sending in a range of weather data every five minutes by radio or the Internet, to feed into its weather prediction systems.

Hamilton’s links page contains a list of other home weather stations that post their data on the net. Data is available from other sites as well. Steve Rosie has links to several. Want to know the height of the waves 17 km east of Banks Peninsula? www.ecan.govt.nz/echome/ gis&database/waves/ wavebouy.htm has it cov­ered. Want to check condi­tions in the Dunedin Octagon, and who is taking an early lunch? Then www.cityofdunedin.com/ weather/today_window.htm is for you. Wish to examine sky conditions in Lower Hutt? Trevor McGavin’s weather cam, http:// homepages.ihug.co.nz/ -tmcgavin/webcam.html is updated every five minutes. Considering a ski trip and would like to view the snow on Ruapehu or Mt Hutt? Try www.snowcam. co.nz.

Occupying a rather different niche is Takitimu Weather Modification (TWM), offering an indigenous approach to weather modification (www.twm. co.nz). “Com­prised of consciousness, energy information fields and unlimited access to atmospheric resources, Indigenous WM technol­ogy is an incomparable `force multiplier.’ Because of its capacity to be seamlessly integrated into existing weather systems, it is difficult to distinguish modified phenomena from those derived from ‘ran­dom’ natural processes,” reads part of its blurb.

Offering such services as rainfall generation, dissipation or prevention, disaster prevention and mitigation—even from a distance—TWM claims to have been behind the breaking of the Auckland drought a few years ago. Although it has offered its services widely—such as to America’s Cup syndicates and those organising millennium celebrations—generally its offers of assistance have not been taken up.

The man behind TWM, John Porter, has lodged a claim on behalf of all Maori with the Waitangi Tribunal “for total owner­ship, management and control of the Atmosphere and its resources” within Aotearoa/New Zealand. If Porter’s mastery of the weather is as complete as he would have us believe, forecasters and their data will become relics of the past. Our weather will simply be a matter of who can pay TWM’s fee, to have it as they would wish!