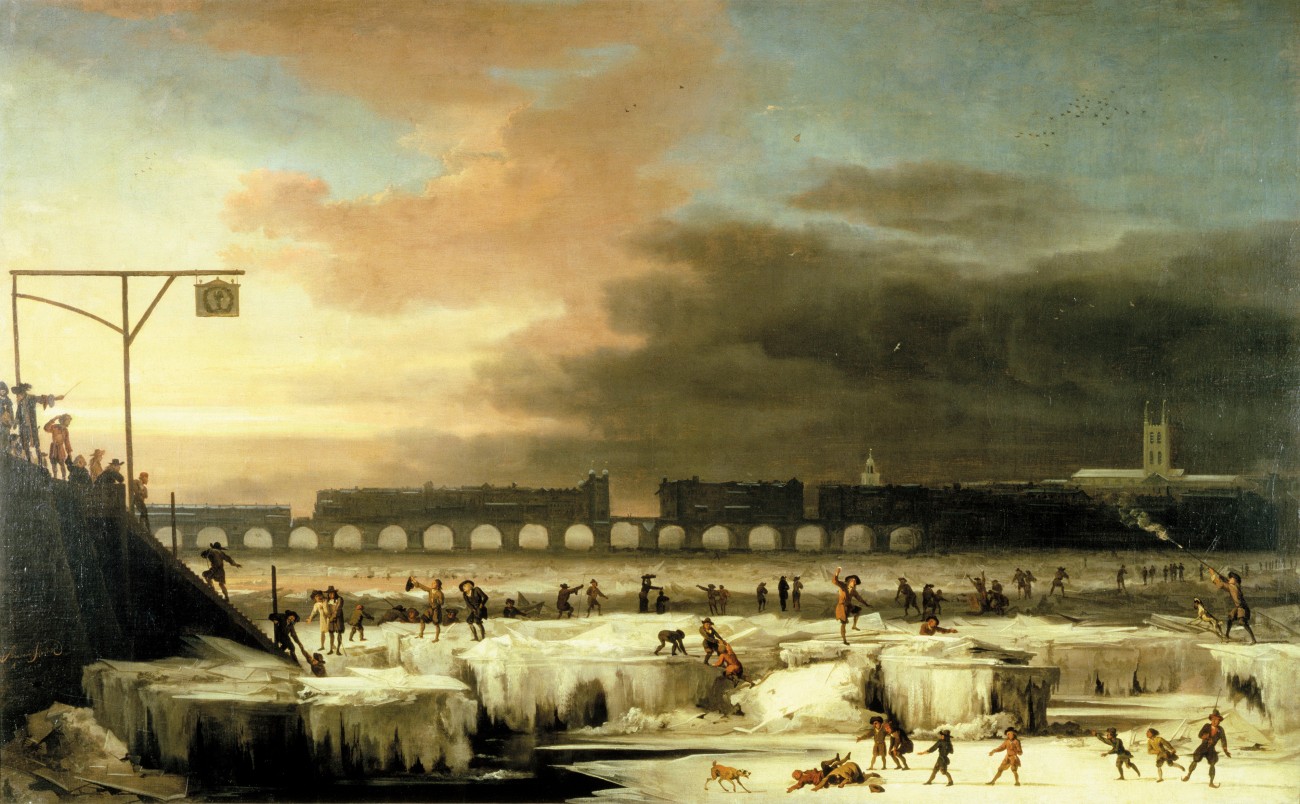 Flood, drought and cold repeatedly destroyed crops worldwide during the 17th century, while famine and war killed millions. By the end of the century, the world’s popula­tion had been reduced by about a third.

Writers at the time felt that the sequence of disasters was exceptional, but their work was largely forgotten as conditions improved over the following centuries. However, in the 20th century, historians revived interest in what became known as the Little Ice Age. Geoffrey Parker explores this in his magiste­rial book Global Crisis: War, Climate Change and Catastrophe in the Seventeenth Century.

Some events stand out from the rest. The repeated freezing of the Thames in London is well known, but many other European rivers froze as well. In 1660, the frozen Danube at Giurgiu allowed an Ottoman army to cross into Romania and lay waste to the countryside.

In the winter of 1620–21, the Bosphorus froze for the only time in recorded history. The ice lasted 40 days, preventing food supplies from reaching the city of Istanbul, which had a population of almost a million. Mishandling of the crisis led to the assassination of the Sultan.

The Baltic Sea froze in 1658, allowing a Swedish army with artillery to march 30 kilometres over the ice between Jutland and Copenhagen and defeat the unprepared Danes. The frozen sea also blocked the supply of the 200,000 tons of grain from Poland that normally helped feed the Atlantic cities of Antwerp, Amsterdam, Lisbon, Seville and London.

In China, drought in 1641 caused the Grand Canal to dry up for the only time in recorded history, preventing grain from reaching Beijing, which contributed to the city’s surrender to a rebel army.

As their world collapsed around them, many people saw the hard weather as punishment for their sins. “To appease and avert the wrath of God,” the English House of Commons and House of Lords together decreed in 1642 that all public plays—“being spectacles of pleasure, too commonly expressing lascivious mirth and levity”—must cease. They went on to ban maypoles and the celebration of Christmas.

In Germany, dancing, drinking and gambling were banned and women forbidden to wear skirts that revealed their knees.

Scapegoats were sought. In Germany, in May 1626, a hailstorm followed by Arctic temperatures led to the torture and execution of 900 men and women accused of causing the bad weather by witchcraft.

In Scotland, extreme winters and poor harvests in the 1640s led to more execu­tions for witchcraft than ever before or since, and in England, a similar peak in executions occurred around this time.

A number of comets appeared during the 17th century, including two visits from Halley’s comet, and these received some of the blame for the disastrous climate. Intense scrutiny of the heavens also revealed a remarkable lack of sunspots after 1645.

Scientists today agree that this lack of solar activity contributed to the colder climate, as the sun’s radiation is weaker when sunspot numbers are low. However, volcanic eruptions made a greater contri­bution to reducing the amount of sunlight reaching the Earth’s surface. The eruption of Huaynaputina in Peru in 1600 was the largest volcanic eruption in South America in historic times. A major eruption also occurred in Papua New Guinea around 1580 and another in the Philippines in 1641.

Another contribution to the Little Ice Age has emerged from polar ice cores: atmos­pheric carbon dioxide declined to a marked minimum around 1610. The cause of this may have been massive reforestation of the Americas after the sharp decline in agriculture following the population crash as western diseases such as flu, measles and smallpox reduced the population of Native Americans from an estimated 60 million to around six million.

As well as describing the terrible toll of famine and extreme cold, Parker explores the effects on war and rebellion. In Europe, war between nations occurred in every year but three during the 17th century, and civil war also broke out in many countries.

Too often, the response of governments to falling taxes as harvests failed was to introduce other taxes on populations already in distress. In England, taxation levied by Charles I set him on a collision course with Parliament, leading to civil war. This cost Charles his life as well as the lives of a quarter of a million citizens—about seven per cent of the population at that time. This compares with two per cent of the population lost in World War I.

Once armies were on the move, they took whatever food they could find from both friend and foe, leaving starvation in their wake. Historians in Germany consider the desolation that occurred during the 17th century much worse than the destruction wrought during the wars of the 20th century.

Failed harvests also fuelled wars between countries. A Ming general in China hired an army from Manchuria to help suppress a rebellion. They were successful, but a failed harvest and severe winter in Manchuria convinced the army not to return home but to attack the Ming forces instead and attempt to take over the empire. They eventually succeeded after six decades of war.

Global average temperatures cooled only half a degree during the Little Ice Age, but the effects were immense. As we contemplate what lies ahead in a rapidly warming world, some sobering studies have been published of the recent impacts of climate change.

Drought in Russia in 2010 caused a spike in grain prices that has been identi­fied as one of the triggers for the unrest in Tunisia that caused the government to fall, leading to the political changes known as the Arab Spring across the Middle East.

A study published in March in the Proceedings of the National Academy of Sciences by Colin Kelley of the University of California’s Santa Barbara campus explores the links between drought and the war in Syria. The drought, from 2006 to 2010, is the worst on record for the region and destroyed agriculture in northern Syria’s breadbasket, driving farmers off their land. More than a million people fled to cities already straining to cope with refugees from the war in Iraq, contributing to the discontent that led to the 2011 uprising.

The links between climate, food supplies and political instability are likely to become clearer as the current century unfolds.