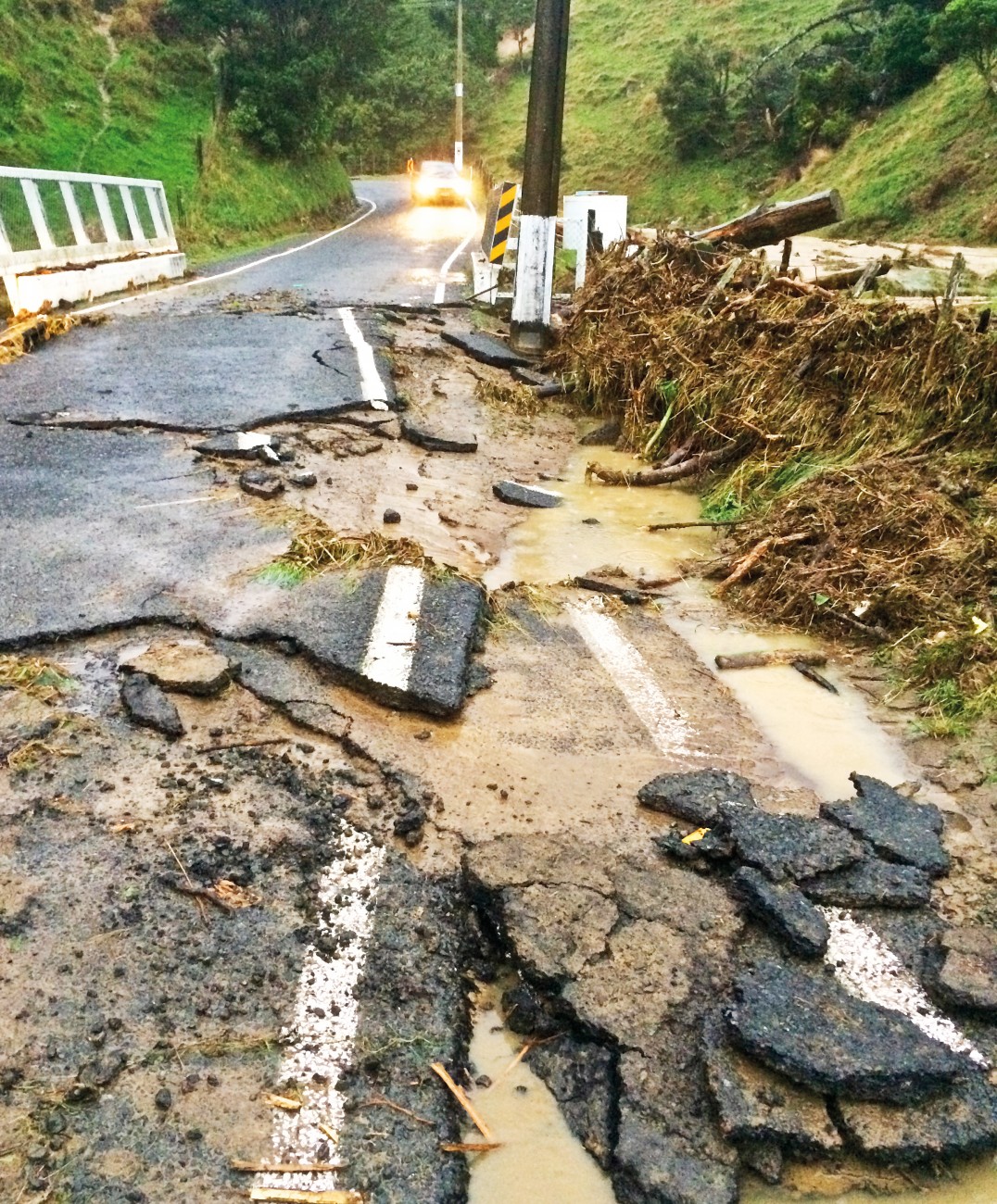 On Thursday 14 May, a vigorous storm crossed New Zealand, bringing torrential rain to the Kāpiti Coast, Porirua, Petone and Wellington. In some Kāpiti locations, two months’ rain fell in a little over a day, and in one intense morning, nearly a month’s rain fell in six hours at Paraparaumu airport. Rainfall was intense in parts of the Hutt Valley and Petone, and in Wellington city. State Highway 1 and the main trunk railway line were closed by a slip between Pukerua Bay and Paekakariki. Kāpiti commuters had no access to Wellington as the Paekakariki Hill Road was also closed by a slip, and in Petone, floodwaters claimed the life of an elderly man, whose body was found near his submerged car.

A little over two weeks later, on June 3, another vigorous storm crossed New Zealand, this time bringing torrential rain to the Dunedin area. Again, around two months’ rain fell in one day in some parts of the city. Significant flooding occurred in parts of South Dunedin, St Kilda, St Clair, Kaikorai Valley, Brighton, Mosgiel and the Taieri Plains. Many roads were closed, including State Highway 1 south of the city. (At the same time, the northern part of the storm was delivering thunderstorms and lightning to Auckland and the north of the country.)

Experiencing two such extreme events in quick succession naturally raises questions. What caused them? Is this climate change?

Much of the heaviest rain that fell in the May 14 storm came from thunderstorms embedded in frontal bands that crossed the central region, one by one, as if they were following one another on a track. Meteorologists call this ‘training’. This is how Paraparaumu and Raumati received nearly 100 millimetres of rain in around six hours, and how the floodwaters rose so rapidly.

The large and very active June 3 storm had developed over the previous couple of days, deepening significantly over the Tasman Sea. Like the May storm, this one also featured very cold air moving north over the Tasman and combining with warm moist air from the north. The heaviest rain in this event occurred around Dunedin, falling from the southern tail of the main frontal band, on the south side of the storm where the wind flow was directly on-shore.

How unusual were these storms? In the May event, the Kāpiti rainfall of between 120 and 180 millimetres within 24–36 hours suggests a one-in-50-year event—or a 50-year average return interval (ARI), as metereologists measure it. The heaviest bursts, such as the 80 millimetres in just six hours at Paraparaumu airport, were more like a 70-year ARI. The June event in Dunedin, where rain gauges measured 71 millimetres between 11am and 4pm, represented a one-in-100-year event. So, both storms may be for many people a once-in-a-lifetime event, or maybe twice, if you’re ‘lucky’.

In broad terms, both storms formed in similar ways, in similar locations to the west of the country, before moving across New Zealand. In both cases, moist on-shore flow led to the heaviest rainfalls, but there the similarities end. The heaviest rain and flooding in the May storm came in concentrated bursts from thunderstorms, whereas the heaviest rain in the June storm came from heavy and steady rain from a frontal rainband. The Dunedin event was perhaps more exceptional, since average rainfalls there are lower than in Wellington and Kāpiti.

A natural question to ask is whether climate change is implicated in the intensity, or the rapid succession, of these storms. While it is hard to connect a single event to a change in climate, we can predict how the probability of such storms changes as the climate warms. Because the amount of moisture the air can hold increases quickly as the temperature rises, global warming is very likely to bring increased risk of heavy rainfall and flooding such as we witnessed over those two months. Atmospheric moisture content has already increased around five per cent on average as a result of the 0.8ºC global warming over the past century. So it’s probable that a little of the rain that fell in the May and June storms came from the warmer, moister atmosphere we already live in. For the future, the predicted 2ºC warming would roughly double the likelihood of the heaviest rain seen in both storms. Climate change doesn’t mean that we will see more of these kinds of storms, but it does mean that when they come, they will be more energetic and will likely bring more rain and a greater chance of flooding.

Another contributing factor may have been the El Niño weather pattern, an oscillation in water temperature that is getting under way in the tropical Pacific. El Niños rearrange the jet streams and encourage more storms to cross New Zealand than we would see in a normal year.

So while both storms were the result of well-understood mechanisms of turbulence in warm and cold air that generated frontal bands and set off vigorous thundery convection, they may have been encouraged by the developing El Niño and perhaps intensified by a warmer atmosphere. Either way, the next big storm could be along next week, or in many years’ time, a reminder that there remains a high degree of chance in the movement and development of complex natural systems.