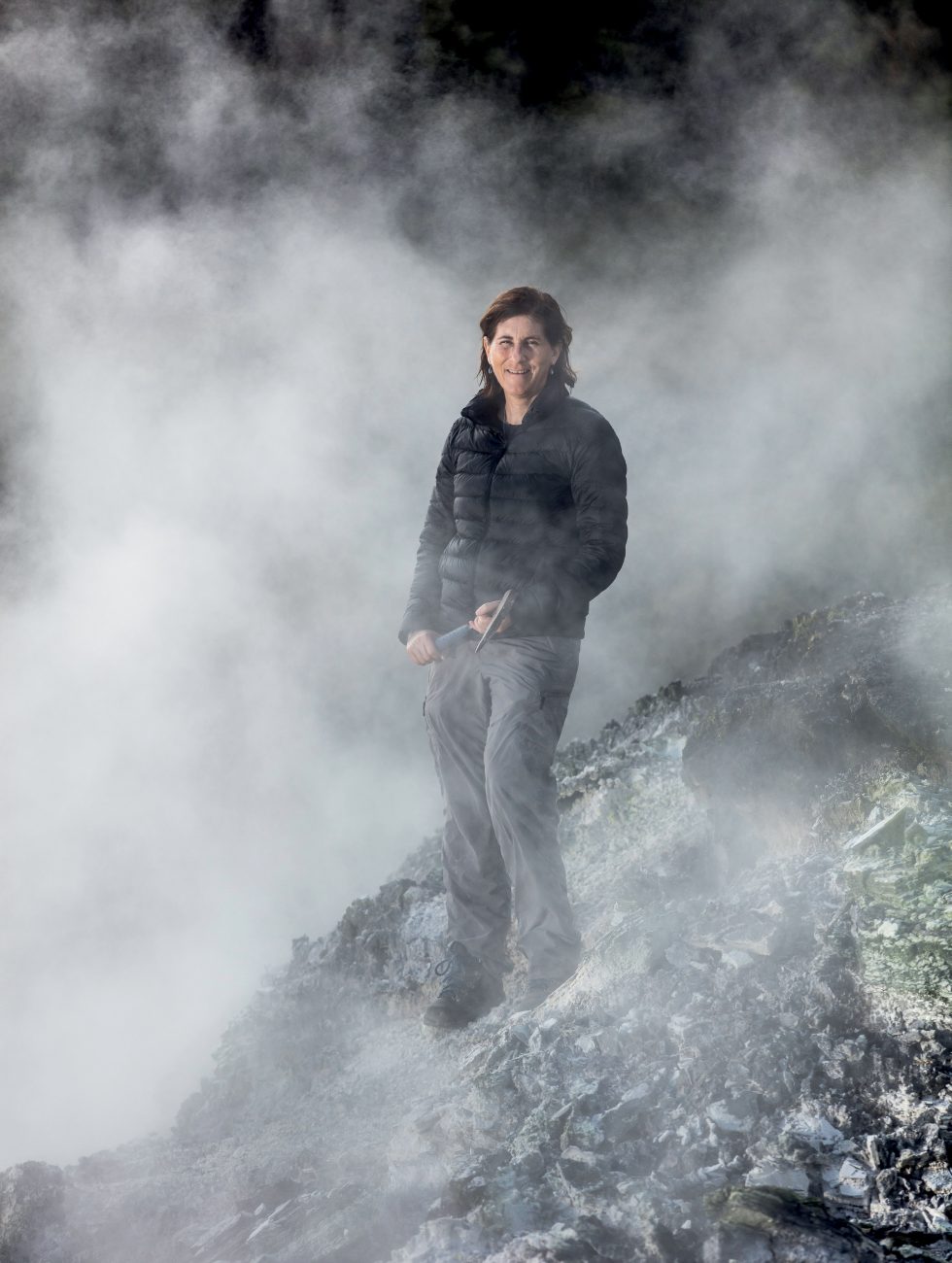 Every surface in Kathy Campbell’s office groans under the weight of her rock collection, each a reminder of a place, a time, a field trip, a story. Rocks have tales to tell, she says, and she’s trained her ears to listen.

“As a geologist, it’s like the world becomes four dimensional. Anywhere you go, you get to read the history of our planet.”

Originally from California, now a professor at the University of Auckland, Campbell has been in New Zealand for two decades. Her accent hasn’t faded, but she feels rooted here now, connected to the people and landscape: “I think there’s something about the land that enchants people here.”

One of her favourite places is Muriwai, a beach on Auckland’s west coast. On a late autumn Saturday, the waves are crowded with surfers, and the stacks of rock with gannets, but Campbell turns away from the sea. When she goes to the beach with her family, she says, her partner Andrea, a marine ecologist, looks for sea creatures, their 11-year-old daughter, Ella, prefers to go swimming or surfing, “and I face the cliffs”.

Today, she’s excited to show me the remnants of an ancient volcanic eruption, pointing to hexagonal columns and pillow-like globs of lava in the bluffs above. Much lower, near where the cliff meets the black sand, there are signs of life: tunnels made by long-dead animals burrowing into the residue of a landslide that was once underwater.

This is where Campbell takes first-year geology students to get them inspired.

“They can go and do anything they want in the world—but they should love rocks,” she says. “I love this, and I want everyone else to love it, too.”

For 20 years, Campbell has studied the clues life leaves behind, analysing how microbes interact with extreme environments, such as hot springs. In New Zealand’s geothermal zones, many kinds of ‘extremophile’ bacteria intermingle with chemicals in the scalding water, forming brightly coloured microbial mats, sinter terraces, knobby stromatolites, and other bizarre formations. Their tell-tale shapes can then be preserved as fossils, providing evidence of life.

In the past few years, Campbell’s work has taken on new significance, propelling her into the field of astrobiology: the study of life’s potential in the universe, and the origin, evolution and history of life on Earth.

“All the little minutiae that I’ve been so excited about for years—because I just think it’s incredibly cool that life is interacting with minerals in this way—turns out to be relevant for the beginnings of life on Earth, and life on Mars. So suddenly my work was in the spotlight. A lot more people wanted to know about it.”

In 2015, Campbell met Martin Van Kranendonk from the University of New South Wales, who showed her photos of fossil formations his team was finding in the Pilbara region. They were the same organisms that could be found in hot springs, Campbell realised.

She joined Van Kranendonk in Western Australia, and the team’s work led to a thrilling new discovery, published in a blockbuster Nature paper this year.

The study site was thought to be a primordial marine environment, but Campbell and the team found evidence of terrestrial hot springs teeming with micro-organisms, which numbered among the oldest life found on Earth.

The discovery pushes back the geological record of life on land by 130 million years, and life in hot springs by three billion years.

Scientists debate whether life first arose on the surface of the earth, or around hydrothermal vents in the sea. The Pilbara fossils boost the land theory—a return to Charles Darwin’s idea of the first organisms appearing in a “warm little pond”.

“These findings tell you that life was on land really early in the history of the Earth,” says Campbell. “It brings the presence of hot springs far back enough that you have to consider them as a real contender for the origin of life.”

Hot springs may also be able to shed light on whether there was ever life on Mars.

“More than three billion years ago, Mars had volcanoes and hot springs, too. It had water. So, did life evolve there, too? And if not, why not?”

In 2008, it was reported that a NASA rover, Spirit, found potential evidence of an ancient hydrothermal system in an area of Mars known as Columbia Hills. Then Spirit died—but not before transmitting images of silica structures that look like those formed by microbes in Earth’s hot springs.

A closer look is required, so NASA is planning a mission to Mars in 2020 to continue the search. In February, 250 scientists and spacecraft engineers from around the world were invited to California to debate the merits of eight potential landing sites. Campbell was one of them, and she argued for a return to Columbia Hills: “That’s where I think we have the best chance of finding life.”

The site was chosen as one of the top three, and a final decision will be made in early 2018. If Columbia Hills is selected, a trip to mission control and a switch to Mars time may be on the cards for Campbell. She thinks it’s more likely one of the other two sites will be chosen, as they haven’t been visited before.

Anyway, she has plenty of other things going on.

“It’s like everything has gathered a certain momentum,” she says. “Becoming a professor, I finally have some breathing room to think big.”

Campbell is the director of a new research centre the university plans to open later this year, Te Ao Mārama—Centre for Fundamental Inquiry, which will bring together physicists, geologists, philosophers and others to address questions of life, the universe and everything. Last year, she was made a fellow of the Royal Society of New Zealand.

Campbell is increasingly directing her energies towards the next generation, hoping to use her public profile to get more people thinking about the dramatic story of our planet. Perhaps even loving rocks—or at least listening to their stories.

“If more people did that, I think the world would be a better place,” she says. “You understand that we’ve only been here for a short time, and that we’ve had a big impact. You just get your place in the universe.”