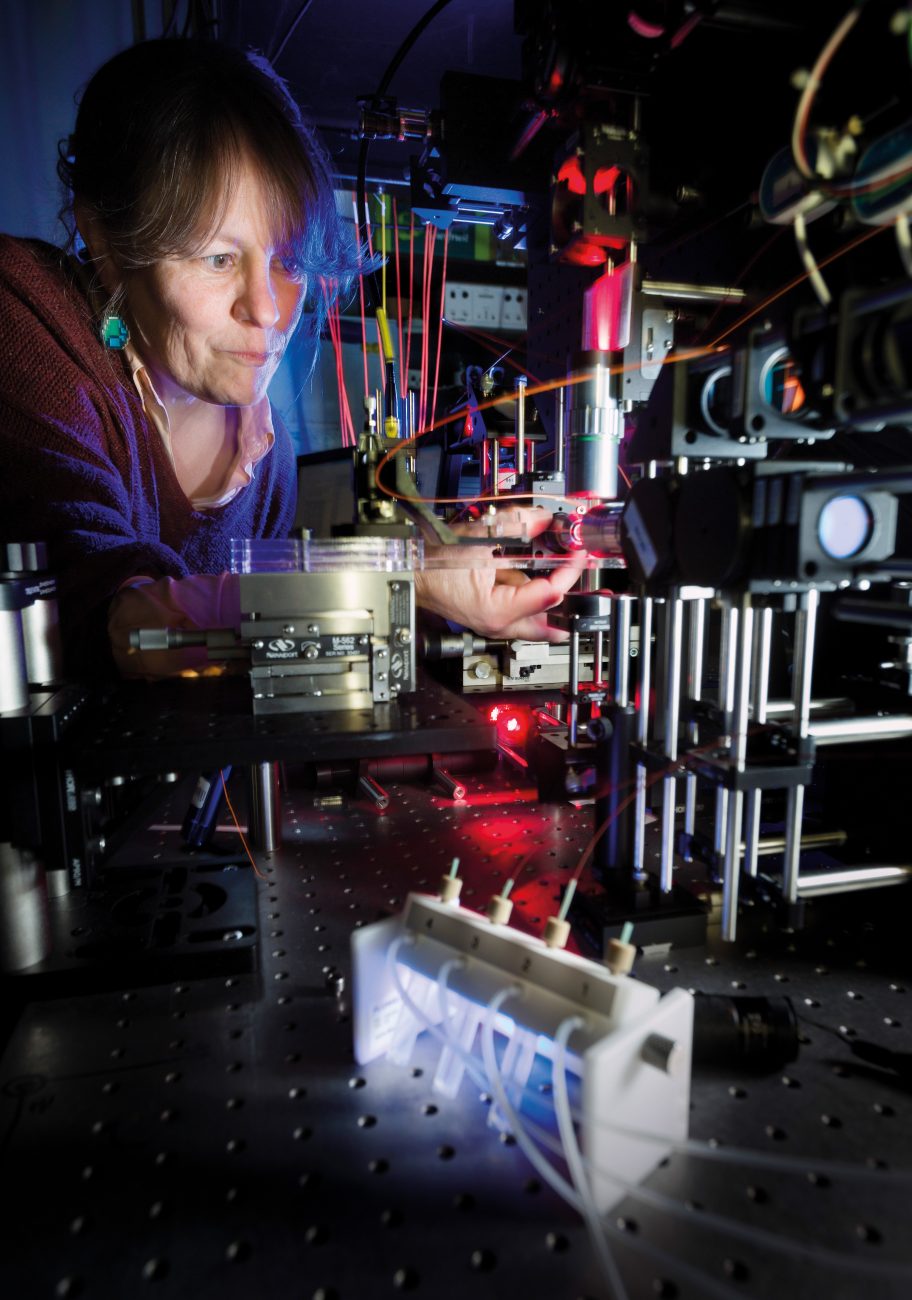 A beer, a bet and a stubborn streak launched Cather Simpson’s career. She was studying towards a PhD in medical sciences in the United States, in a lab that researched haemoglobin—the oxygen-toting molecule found in blood.

“I bet my supervisor a pitcher of beer that I would be able to see, on a molecular scale, the heat energy in the haem molecule. He said that there was no way; it was too fast.”

And so Simpson found herself switching from medicine to chemical physics. “I got my pitcher of beer, and I also discovered a whole new way to look at this type of stuff.”

By “this type of stuff”, she means light-matter interactions—what happens during the first millionth of a billionth of a second after a molecule absorbs light.

“I wanted to figure out whether I could predict, just by looking at a molecule, what it was going to do,” she says. “What drives me is that kind of puzzle solving.”

So how does one study these tiny, fast interactions?

Simpson likens it to stop-motion photography. First, she hits a molecule with a short, sharp laser pulse of light. Then, she takes a series of spectroscopic “snapshots” to see what the molecule is doing with the energy it absorbs from the laser.

“It’s like ringing a bell and trying to understand where the energy goes,” she says. “If you can funnel that energy, you can make molecular dragons! A dragon would be boring if it emitted energy all over its body instead of breathing fire, right? It would just be warm to the touch, and we wouldn’t have the Knights of the Round Table. If you could take the energy out of a molecule and focus it in one place, you could do things like kill cancer cells.”

Playing with lasers and creating molecular dragons occupied Simpson’s early career, but her move to New Zealand in 2007 transformed her science once again.

“When I thought about success before I moved to New Zealand, it was: will something I figure out make it into a physical chemistry textbook? Here, I needed to do something different.”

The challenge? Footing the bill for the million-dollar lasers she needed. Simpson launched the Photon Factory, a multi-user research centre, which she directs, at the University of Auckland. It covers a broad research portfolio, from fundamental chemical physics through to applied photonics. Collaboration with industry is key to funding the operation.

“Every time an industry person came through the door, I said, ‘Yes! We can do that.’ We made sure we did a really good job, and so the idea got around that there was a lab at the university where somebody could come to have a problem solved.”

Much of the Photon Factory’s applied research focuses on dairy, which Simpson says is “a happy accident”. A serendipitous coffee meeting with a dairy investor and an idea drawn on a piece of paper led to the Factory’s first spin-off company, Engender Technologies, which is developing the ability to efficiently sort bull sperm by sex. This would give farmers greater genetic control over their herds—and fewer bobby calves.

Sperm-sorting technology has not been widely adopted because it’s expensive, and results in lower-than-ideal fertility rates. But Engender developed a new technique, using lasers to “nudge” sperm cells between channels “the size of a human hair” on microfluidic chips.

“We’ve demonstrated that we can sort and get enriched populations of sperm in the lab, and we’re looking at scaling up to full commercialisation over the next 18 months,” says Simpson.

“Imagine a CD-sized disk and on it, we have a combination of analytical tools,” says Simpson. “So, if you want to test your cows’ milk for fat and protein this week, but next week you want to test for progesterone, you just change to a new disk.”

Simpson lights up with an analogy: “It’s like a CD player. You don’t change the whole player when you want to change from pop to classical. You just change the disk.”

Although Simpson straddles the science-business worlds—where the science is heavily ‘applied’—she chalks up her commercial success to “building a really strong foundation in light-matter interactions”. She hopes the Photon Factory will help to show that scientists have a unique skill set that can benefit business.

“Our job description is to think about things that don’t exist,” she says. “University researchers are really good at setting ambitious goals, because we have to imagine the unimagined. We can be bold in ways that people who are in the business community can’t be. I think we need to start pollinating this idea outwards, as much as our technology.”