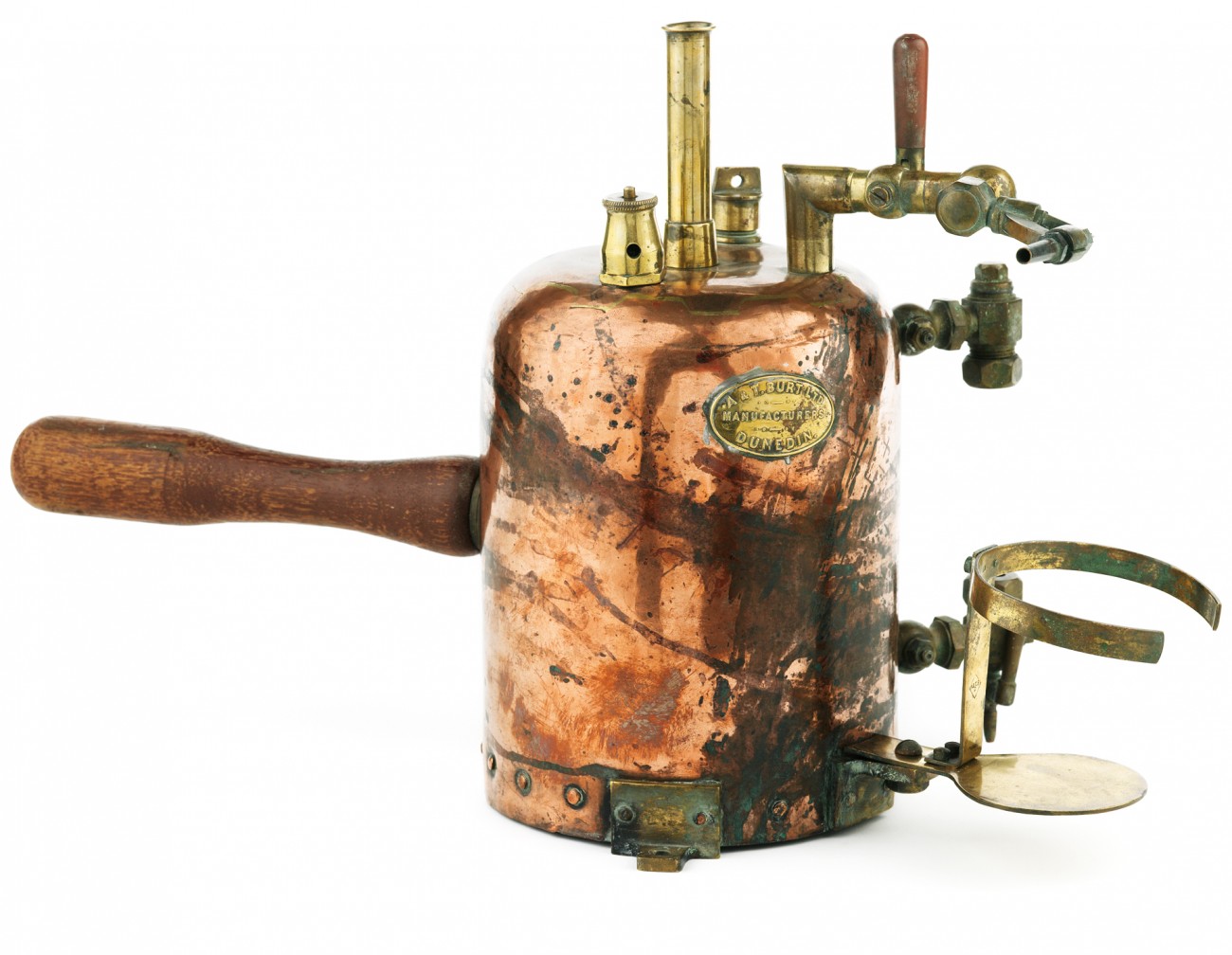 More than 8000 New Zealanders died in just eight weeks from the 1918 influenza pandemic, almost half the total number who were killed in the war being waged concurrently on the other side of the world. Even when the pandemic came to a natural end, no real cure had been discovered.

One treatment was the inhalation of zinc sulphate mist. Small inhalers were mass-produced by the Railways Department and sent around the country, but four larger units made of copper, brass and wood by A & T Burt Ltd were installed as “inhalation centres” in public buildings in Auckland, Wellington, Christchurch and Dunedin.

The device was filled with water and set atop a primus stove, the side-clip fitted with a mug containing a two per cent zinc sulphate solution. A tubular sight glass was attached to the side to check the water level. As the steam was let out through the nozzle, the zinc sulphate would be drawn up and blasted into the patient’s throat by the steam. Even though it was the only “cure” that the Department of Public Health could offer, nowadays we know that it was medically useless. In fact, it probably did more harm than good, not only in bringing people together and heightening the risk of contagion, but also because a strong mixture would inflame the nasal tissue—if it hadn’t already been burnt by the steam—and render the person even more susceptible to influenza.

There were always alternatives. Other dubious “personal preventatives” included munching on a sugar lump soaked in kerosene, hanging camphor bags around the neck, smoking cigarettes, or drinking spirits. There were unfortunate consequences to this latter treatment. Pub-goers were “virtuously” knocking back vast quantities of spirits in the interests of good health, which put an even greater burden on relief workers. As a result bars, breweries and wine and spirit merchants in Wellington were closed while the pandemic was rife, and the town hall was set up to distribute “small quantities of spirits” to people with a signed note from the doctor. Consequently, the town hall became known as the Town Hall Bar.

The device was supersized in Christchurch. Fourteen city trams were commandeered as mobile inhalation centres, and hoses in the compressed-air braking systems connected to get a zinc sulphate sprayer up and running. These innovative vapour chambers were taken to outlying districts on the major routes for residents to climb aboard and walk through the cloud of steam. But like the smaller contraption, the inhaler on rails was of questionable medical value.