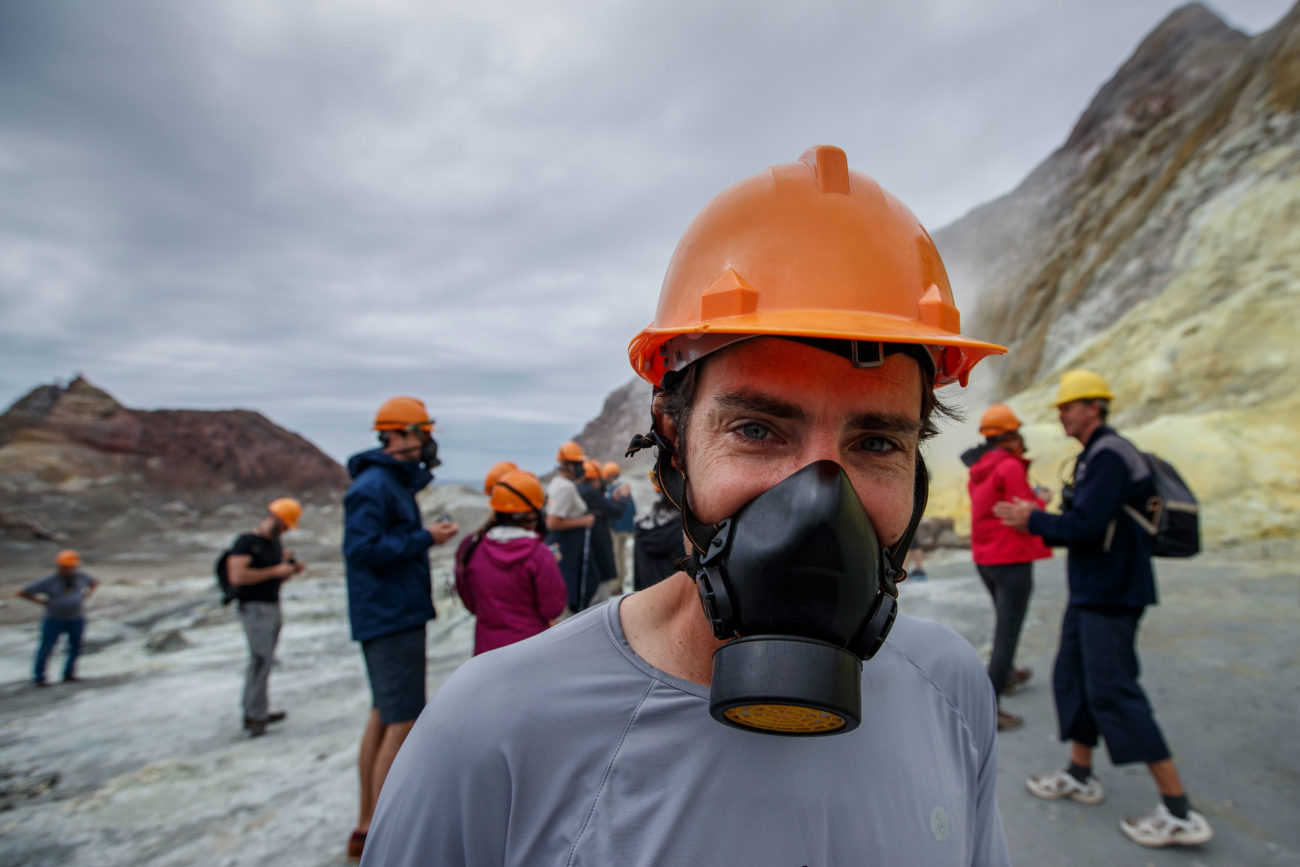 In March 2019, a team from New Zealand Geographic—Richard Robinson, Arie Spyksma and I—steamed across the blue swathe of the Bay of Plenty, and pulled up beneath the smouldering ruins of Whakaari/White Island at dusk.

The gannets were rallying in circles and calling mournfully as the setting sun painted the gravel flanks of the volcano a terracotta colour. We were gripped with awe. That night, the volcanic plume rising from the crater lake was large enough to form rain, so acidic it stung my skin.

We landed a hundred kilos of gear on the shingle beach at Te Awapuia Bay the following morning, donned helmets, slung masks around our necks and surveyed the yawning crater of Whakaari as we waited for the tour boat to arrive. From the lake, 400 metres inland, a towering cloud of steam rose in an unstable column into a clear blue sky. It was deafeningly quiet. We checked our radios, checked our gear, checked our radios again.

White Island Tours guide Kelsey Waghorn arrived and briefing us—when to use the masks, where to walk, where definitely not to walk. Then we shuffled off, a 60-kilogram drone case suspended between us on oars, like we were carrying the Ark of the Covenant.

The tumeric-coloured earth crackled beneath our feet, and clouds of acrid steam drifted through the caldera, leaking through the side of the gas mask, searing the throat, bringing tears to the eyes and leaving us gasping for breath. Sulphur clung to every surface like gilding in a great cathedral, the precipitous cliffs its buttresses and vaults.

We picked a moment when the plume cleared, and flew the drone over the crater lake, a 360° virtual reality camera suspended from the gimbal as tourists lined up on the crater’s edge like ants around the rim of a bowl. The scale was staggering, in a way that those who have crossed Tongariro might appreciate.

Using drones, Richie captured aerial photos that revealed the tortured landscape (some are reproduced in the feature on page 34) and Arie surveyed the island in three dimensions. Over 12 flights, the drone buzzed back and forth as if weaving a cloak, creating a matrix of more than 900 photographs that were later stitched together to create a photo-realistic model—accurate to 10 centimetres—that can be visualised in augmented reality and spun in the hand like a rock. A two-dimensional rendering of this model is pictured on page 41, and you can interact with it at nzgeo.com/stories/whakaari.

We took the 360º VR camera underwater too, diving around the fringe of the volcano, submarine vents releasing their gases in loud bangs like pots crashing together. You can view the 360° videos at nzgeo.com/vr/east-cape—our endeavour to give all New Zealanders access to our wild places.

We were still out at White Island on March 15, when New Zealand Geographic’s editor Rebekah White called over the satellite phone with news of the Christchurch massacre, and we began framing our response. Nine months later, Whakaari itself would be the scene of tragedy, and we looked back on the photographs, models and video in a new and devastating light. The assignment had been an adventure, but how quickly it might have turned to catastrophe.