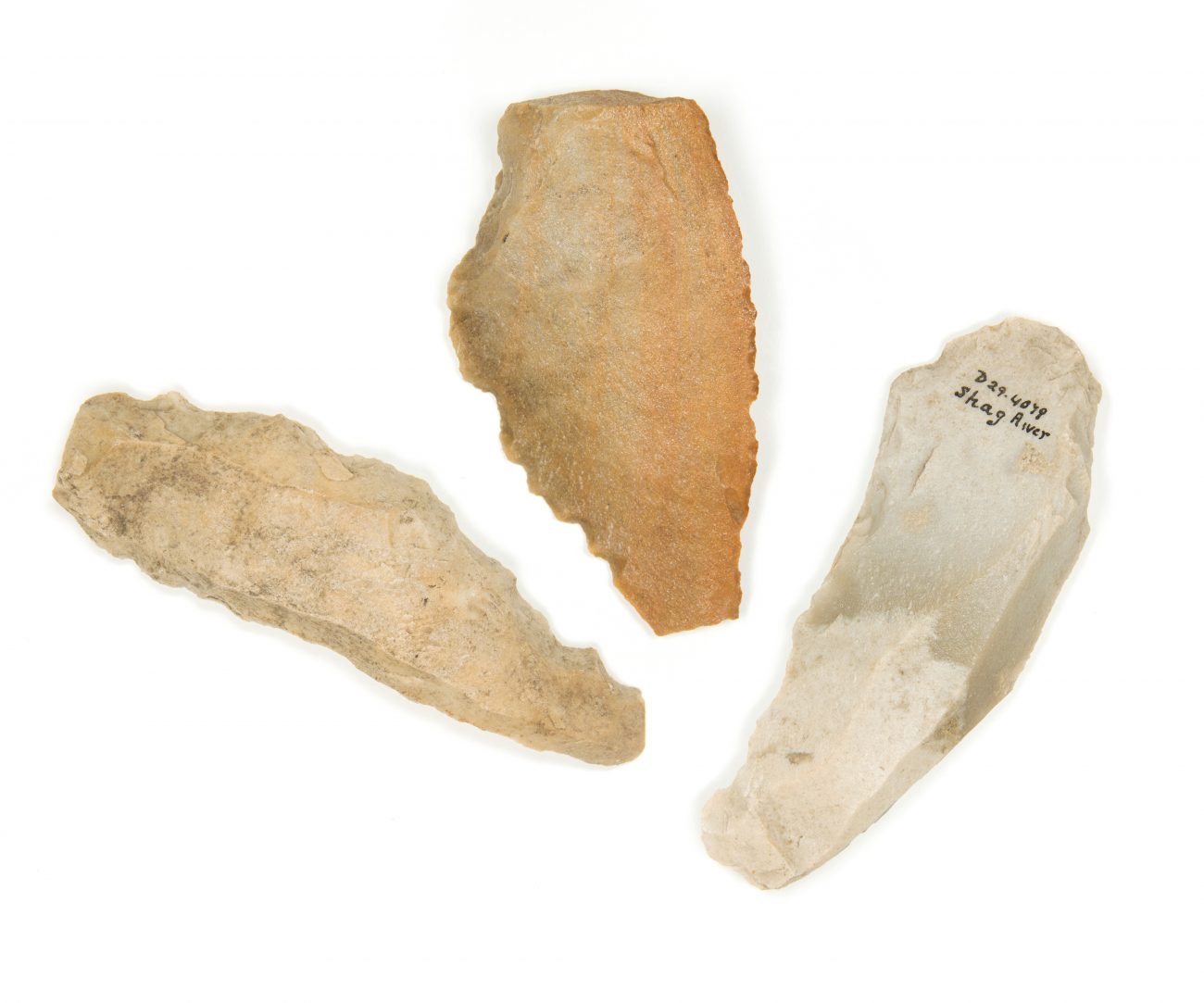 There were somewhere between 50,000 and 160,000 moa prior to the arrival of Māori, outnumbering the early hunters by an order of magnitude. How then, did those hunters, lacking both steel and guns, exterminate so quickly birds up to 10 feet tall?

One fragment of the answer lies only centimetres beneath our feet. Silcrete is a type of duricrust, a marriage of quartz sands and freshwater gravels. Like flint and other palaeolithic stone tools, silcrete is a hard, flaking stone which, when chipped away, forms sharp edges—blades of rock ideal for carving and slicing.

Evidence in the form of these blades is obvious in many of the moa hunting sites in the south-eastern corner of the South Island. At the Shag River Mouth site alone, there are close to 6000 flakes, indicating that silcrete was a bulk commodity that contributed to the decline of moa.

The rock was mass produced in numerous quarries; Oturehua in Central Otago’s Ida Valley is the best known. Although the site is nearly 20 hectares in extent, a space as small as 60 by 60 metres was found to have 49 pits where the stone had been excavated. The pits remain small—two or three metres long and as little as 25 centimetres deep.

The discovery of the stone tools had early European scientists stumped. The rough cut and unpolished blades—not dissimilar to those of tools dating back further than 10,000 BC—indicated Stone Age craftsmanship, which made little sense when compared with the high level of craftsmanship common in Māori culture of the 1800s.

In 1871, scientist and geologist Julius Haast hypothesised that the stone tools belonged to an ancient civilisation some 12,000 years ago and that moa hunters were not Māori. Haast was not alone in his thinking. Explorer William Colenso also believed that Māori knew little about the giant birds and that the few stories still present in oral history were nothing more than a mythology based on the ancient bones that had surfaced in riverbanks over time.

Later that same year, evidence began to pile up that proved both men wrong. The chance discovery of a well-preserved moa neck—with moa feathers “quite fresh in appearance”—made its way into the hands of scientist James Hector, who maintained that moa hunters as well as moa had died out only shortly before the first Europeans arrived.

The last nail in the coffin for Haast’s hypothesis was driven home by his own senior workman, Alexander McKay, whose excavations at Moa Bone Point Cave, Redcliffs, revealed typical Māori artefacts such as fishing hooks, flax bags and polished tools among the bones and eggshells of the moa. Even deeper in the earth oven pits, moa bones and ash coincided with beautifully polished chisels of dark chert, undoubtedly the workmanship of an advanced culture, not like the one Haast had presumed hunted moa.

No matter, Haast continued to fight his corner and concluded that among tribes were a select few geniuses with the capability of shaping and polishing stone to a degree well above the masses. Yet Hector’s hypothesis eventually triumphed—the chipped shards of silcrete found in bulk at butchering sites were works of haste, not of art. They would have meant little more to a moa hunter than plastic forks and knives do today, like disposable cutlery, left at the scene of feasting. Stone tools bearing fine craftsmanship were not left lying around unless perhaps broken or chipped, being as precious in early Māori culture as they are today.

Europeans, then, arrived just short of the largest known bird to disappear into history’s abyss, finding instead only the utensils used in the feast.