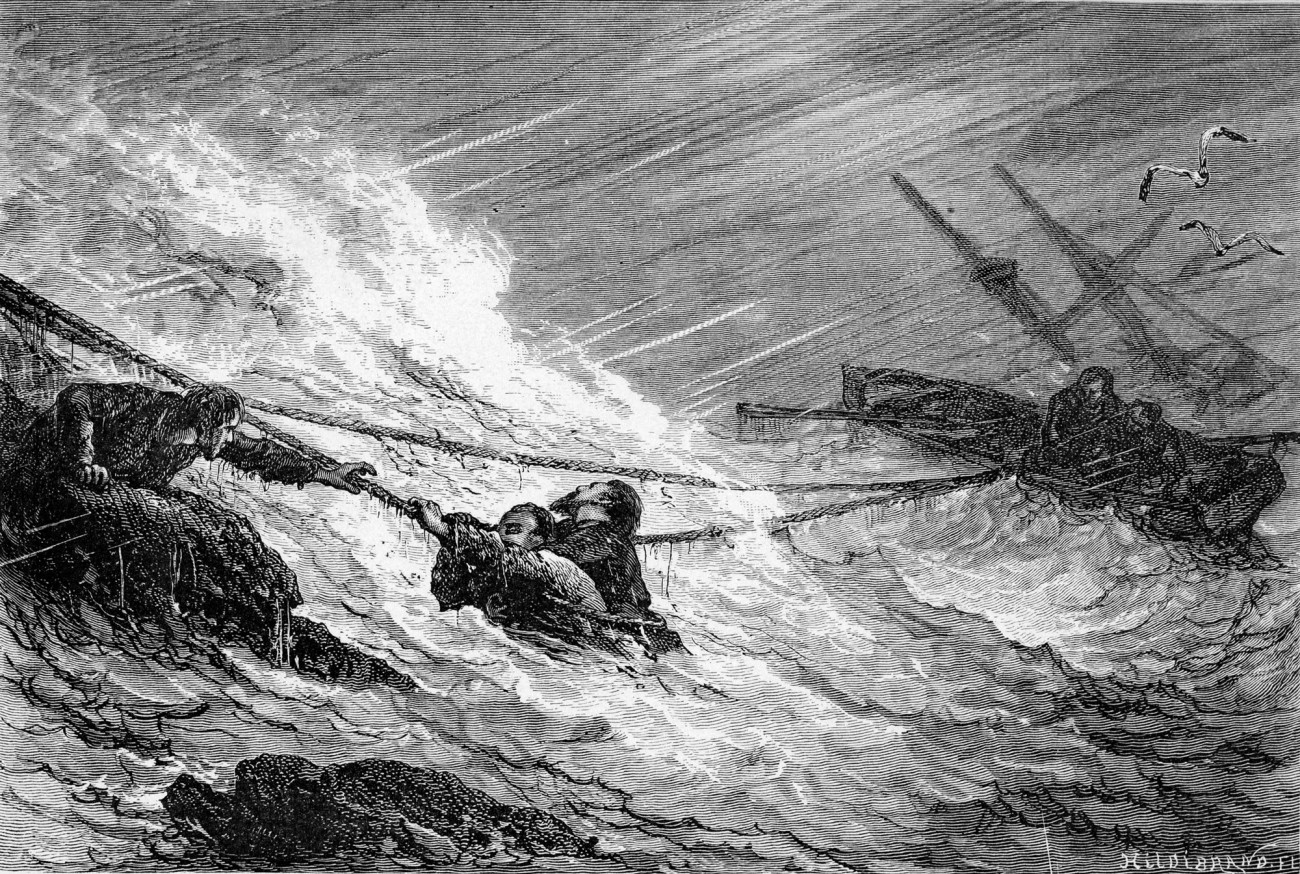 The Auckland and Campbell island groups lie hundreds of kilometres south of Invercargill, in latitudes known as the Furious Fifties. In the age of sail, the westerly gales and the islands’ sheer cliffs made a formidable hazard to shipping.

In May 1864, the Invercauld struck the west coast of Auckland Island. Six of the crew drowned as the ship broke up and sank. Another died scaling the cliff, while others succumbed to exposure and starvation. When rescue came a year later, only three of the original 25 crew were still alive.

More fortunate were the five men on the schooner Grafton. In January 1864, she was driven ashore in a gale, badly holed and filled with water. Fortunately, the vessel was in the relatively sheltered waters of Carnley Harbour, away from the huge swells on the west coast, and the crew made it to shore with their stores. After a difficult year surviving on seals and shellfish, and despairing of rescue, they decided to use the ship’s dinghy to rescue themselves. She was lengthened to 17 feet, the gunwales raised and strengthened, and a deck was constructed over the open hull for shelter. She was deemed seaworthy enough to sail to New Zealand.

Because the boat wasn’t stable with five men on board, only three set out for New Zealand. The other two stayed behind, and were rescued later. In July 1865, they set out following a southwest change and reached Stewart Island after five days of gales and storms, during which the captain slept for only half an hour.

Regular weather observations on the Auckland Islands began during the Second World War, when coast watchers were stationed there to observe and report on enemy shipping, if any. German raiders had operated in New Zealand waters during World War I and it was correctly anticipated that they would do so again.

On August 26, 1939, just days before the war began, the German trading vessel Erlangen slipped out of Dunedin Harbour in the middle of the night. Known to be low on fuel, it was suspected that she had made for the Auckland Islands.

The cruiser HMS Leander was sent to look for Erlangen, but could not enter Carnley Harbour because of bad weather and so missed her. Later, when the first coast watchers arrived, they found that the crew of Erlangen had cut down three acres of rata trees for fuel to supplement her meagre coal reserves so they could reach neutral Chile.

Many of the coast watchers sent to Campbell and Auckland Islands were scientists who used their spare time to study the flora and fauna there. These included geologist C.A. Fleming, who went on to become chief palaeontologist for the Department of Scientific and Industrial Research (DSIR); naturalist J.H. Sorenson, who late wrote Wild Life of the Antarctic; W.H. Dawbin, who became a world authority on dolphins and whales and the physiology of the tuatara; and R.A. Falla, who later became director of the Dominion Museum and founding president of the Ornithological Society of New Zealand.

To help conceal the fact that coast watchers were on the islands, the weather observations were treated as top secret—only the director of the Meteorological Service was allowed to see them. He would then wander into the forecast room and suggest that the meteorologist analysing the weather map should adjust the position of fronts and lows in light of his secret knowledge.

After the war, recognising the value of the weather observations for forecasting over New Zealand, the government allowed the observers to continue on Campbell Island. Radar was installed to allow weather balloons to be tracked to measure the upper winds, and radiosondes were released to measure temperature and humidity profiles.

Once enough observations had accumulated, the climatology of Campbell Island was established and the influence of the westerly winds was clear. Air arriving at the island was very humid after crossing the vast Southern Ocean and formed cloud as soon as it was lifted over the land. Because the winds were persistent, the cloud was persistent as well. At Tucker Cove, where the observations were taken, there was an average of only 659 hours of sunlight a year—just 16 per cent of what was possible if skies had been clear the whole time. (By comparison, Invercargill averages 1621 hours of sunshine a year, while both Auckland and Wellington have a little over 2000 hours, amounting to sunny conditions about half of the daylight time.)

The strong winds also affect Campbell Island’s air temperature, which closely reflects the sea surface temperature. Although colder than New Zealand, Campbell Island experiences much less variation through the year than places in mainland New Zealand. The average January temperature is 9.3ºC and the July average is 4.7ºC. The change during each day is small as well. In mainland New Zealand localities, both the daily range and the range between summer and winter are generally 10ºC or more.

The westerly winds bring frequent rain to Campbell Island, with 1425 millimetres recorded, over 320 days a year. (This compares with 2874 millimetres over 206 days in Hokitika and 1128 millimetres over 180 days in Auckland.) Campbell’s rainfall total is modest despite the 320 rain days because the cold air is unable to hold much water.

The frequent strong winds could be a source of irritation to people working on Campbell Island, but they sometimes revelled in them.

One observer recalls tramping up the hills to the edge of the cliffs and throwing cricket-ball-sized rocks out over the ocean, then dodging them as the wind threw them back.

Although the westerly wind blows most of the time in the Furious Fifties, it does occasionally take a break, which could also be a hazard for sailing ships. The General Grant was wrecked in May 1866 due to a lack of wind, rather than a storm. Caught too close to Auckland Island’s cliffs in misty conditions, she was unable to sail away in light airs, and the swell drove her inexorably towards the rocks and into a large cave, where she was wrecked with the loss of 68 lives. Fifteen others survived, but only 10 of those made it back to New Zealand after 18 months on Auckland and Enderby islands. Rumoured to have been carrying a large amount of gold, the elusive wreck of the General Grant has been sought by salvage expeditions ever since.