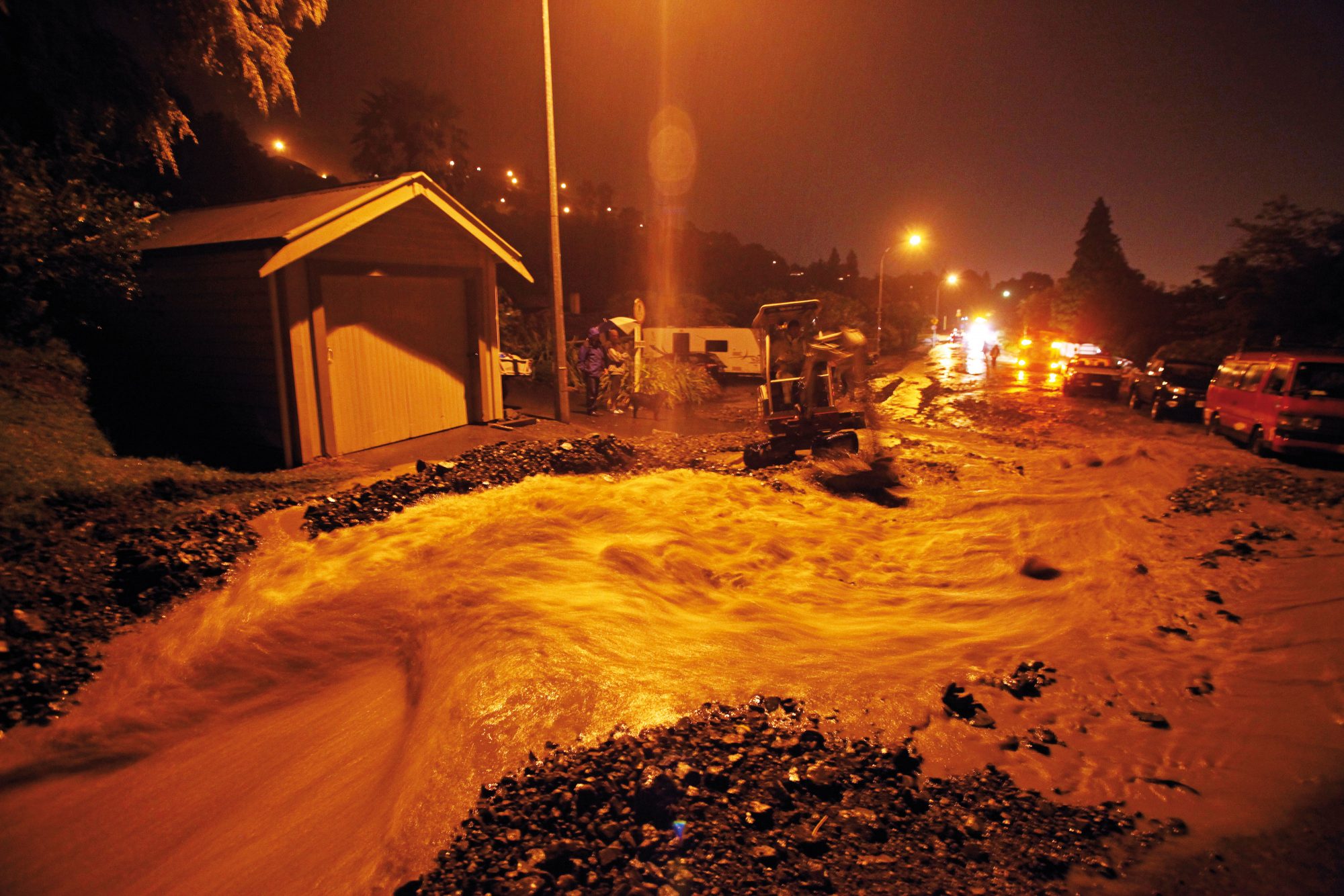 Lynn Robertson, her partner and 18-year-old daughter, Karli, were all away from home when a flash flood thundered down their valley in Golden Bay. A landslip created a dam, Robertson says, then burst, turning their stream into a raging torrent.

With the land cut off by slips, they were forced to stay with friends. What they found when they returned to remote Wainui Bay four days later was a scene of destruction.

A thick blanket of mud, strewn with the carcasses of fallen trees, covered the site where their cottage once stood with an abundant veggie patch and surrounding pasture. The bulk of what Robertson had called home was 30 m from its original footings, precariously hitched up upon a battered bridge spanning what used to be a small creek. One side had been shattered, the splintered walls piled high over mud-soaked, upturned furniture in what remained of the lounge.

A lifetime of belongings were widely scat­tered. One of their goats was so badly injured it had to be put down. And her 12-year-old border collie, Bilbo Baggins, endured two traumatic days trapped in the debris before he was rescued.

Robertson’s story bears testament to one of the most tumultuous summers in the history of Nelson and Tasman—a region renowned for its sunshine.

The rain started on December 13, 2011, the result of a trough stalled between a low in the Tasman Sea and a high to the east of New Zealand.

In response to local reports of flooding, a Civil Defence emergency operations centre was set up for Nelson and Tasman early the following morning, headed by group control­lers Jim Frater and Alec Louverdis.

Senior hydrologist Martin Doyle had been observing floodwaters near Richmond, and joined the team as the storm progressed, but they could never have anticipated the havoc the downpour would wreak. 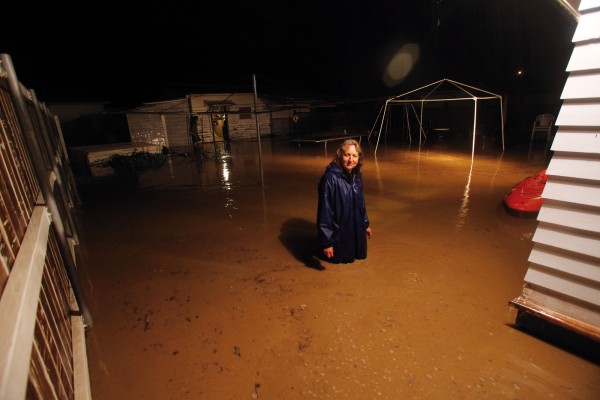 “MetService forecast a large amount of rain for our region, but it soon became appar­ent that this was no ordinary storm,” says Doyle. “What was also of great concern was that, unusually, the rainfall was highest near the coast.

“All our big storms have a warm airstream carrying moisture from the tropics, much like a conveyor belt. MetService noted the air in the lower altitude was unusually moist and as it rose over the hills along the coastline, it cooled and condensed to form rain.”

Rather than strong wind that typically drives the rain further inland to the catch­ment areas of big rivers, the breeze associ­ated with this front was light, so rain lingered near the coast, with the heaviest falling only 2–5 km from the sea.

Combined, these features led to a one-in­-500-year downpour for Takaka and, in Nelson, a one-in-250-year event.

“The coastal foothills became saturated to an extent not seen since rainfall records began, and slips began releasing from the waterlogged slopes,” says Doyle.

“The floodwaters were generally a result of streams becoming choked with debris from the slips, then spilling water as the debris dams released. On some occasions, very high surges occurred, with the water, mud, logs and silt travelling down at speed.”

Witnessing these events first-hand were Jane and Hagen Jurke. On the evening of December 14, they were preparing dinner with their son and daughter-in-law at a home they had built four years before in Ligar Bay. At 6pm, a neighbour hammered on the sliding doors, warning them to leave immediately because the stream above their property had broken its banks.

As they fled to higher ground, a wave of tumbling tree trunks, mud, rocks and water thundered down the valley, bringing with it sheds and a caravan from the properties above. The surge smashed through windows and doors, sending mud and debris through the house, and burst through the rear wall of their garage before ripping off the automatic door and washing away their car as it went.

The Jurkes were left with a half-acre of mud, silt, sand and timber which extends down the valley over a metre deep in places.

The same day, Bob Gordon arrived home from work to witness a black tide of sludge advancing towards his house in Tahunanui. The police and fire brigade were already there.

“It had already surrounded the house, but we managed to get access through the front door,” he says.

He shifted boxes of photos, his computer and other personal belongings to his car, but water was rising quickly outside. After 15 minutes, the fire chief told him it was time to get out. Gordon returned the next day to find the force of the slip had broken through the door and mud had washed through the house.

As heavy rain persisted through the night, the problem escalated. Saturated ground caused further flooding and slips in many areas. Hundreds were forced from their homes.

In eastern Golden Bay, one of the worst affected areas, reports came in of a dam burst­ing in Pohara, 30 houses damaged, and sewage and water systems disrupted. State Highway 60, the region’s only road between Takaka and Collingwood, disappeared down a hillside at Bird’s Hill. Other road closures followed, including access to the popular campsite at Totaranui. In Wainui Bay, Mike Robertson’s 43 ha dairy farm suffered a salvo of landslides, with a blocked creek bursting and belching its contents over his milking shed and paddocks, trapping hundreds of cows.

There was gridlock in Nelson when a large slip blocked State Highway 6, a main arterial route known as Rocks Road. Many homes were evacuated, including a waterfront apart­ment block hit by a landslide. Houses on the slip-prone hills were quickly issued with red stickers. North of the city, the fields around Glenduan suffered extensive flooding. The road to Cable Bay was peppered with slips and had to be closed, cutting off the entire community.

Swimming was banned at beaches due to the likelihood of contamination, and fears grew in Nelson that the main water supply, the Maitai pipeline, was at risk due to land movements.

“The bulk of the rain fell over a 48-hour period,” says Doyle.

Additional building inspectors, geotech­nical engineers, Civil Defence staff and Earthquake Commission teams were brought in to assist. By Saturday, December 17, inspec­tions were being carried out on more than 300 homes throughout the region. By the fol­lowing Tuesday, 139 properties had been issued with red or yellow stickers, and some areas were on notice to boil water. Shipping containers had been installed as barricades to help the reopening of Rocks Road, and sup­plies were being airlifted into cut-off areas, including Cable Bay.

And, as with the Canterbury earthquakes, minds turned to the potential economic repercussions. Emergency response teams were sent to assist dairy farmers in Golden Bay, who were forced to dump 500,000 litres of milk when supply routes were blocked.

Under normal circumstances, almost half of the $350 million that visitors bring to the region comes during a brief six-week summer holiday period. At Pohara Holiday Park, manager Brent Clarke worked around the clock with the Fire Service and a team of friends, family and local volunteers to clear away mud and silt swamping the popular camping ground and its units. Three 33,000­ litre water tanks with pumps were installed to replace the destroyed water supply, and water was trucked in by Fonterra. The park reopened on Christmas Eve, and on Christ­mas Day client numbers were higher than usual for that week.

With some homes still deemed unsafe to occupy weeks later, more than 800 claims lodged with the EQC and widespread damage to infrastructure, the final cost to the region is expected to run into many millions. It could be 10 years before the damage has been ade­quately repaired.

But even badly affected residents remain stoic. It’s incredible nobody was hurt, they say, and many feel lucky to be alive. People were brought together by their combined efforts and some neighbours chatted over garden fences for the first time, taking advan­tage of the quiet resulting from the dearth of traffic in the street.

In Ligar Bay, Jane Jurke is philosophical, despite being pushed out of a comfortable retirement. “We’re lucky, really,” she says, “It’s just things. Sitting around and crying about it isn’t going to get us anywhere. If we needed a reminder that we’ve got to live for the moment, this was definitely it.”