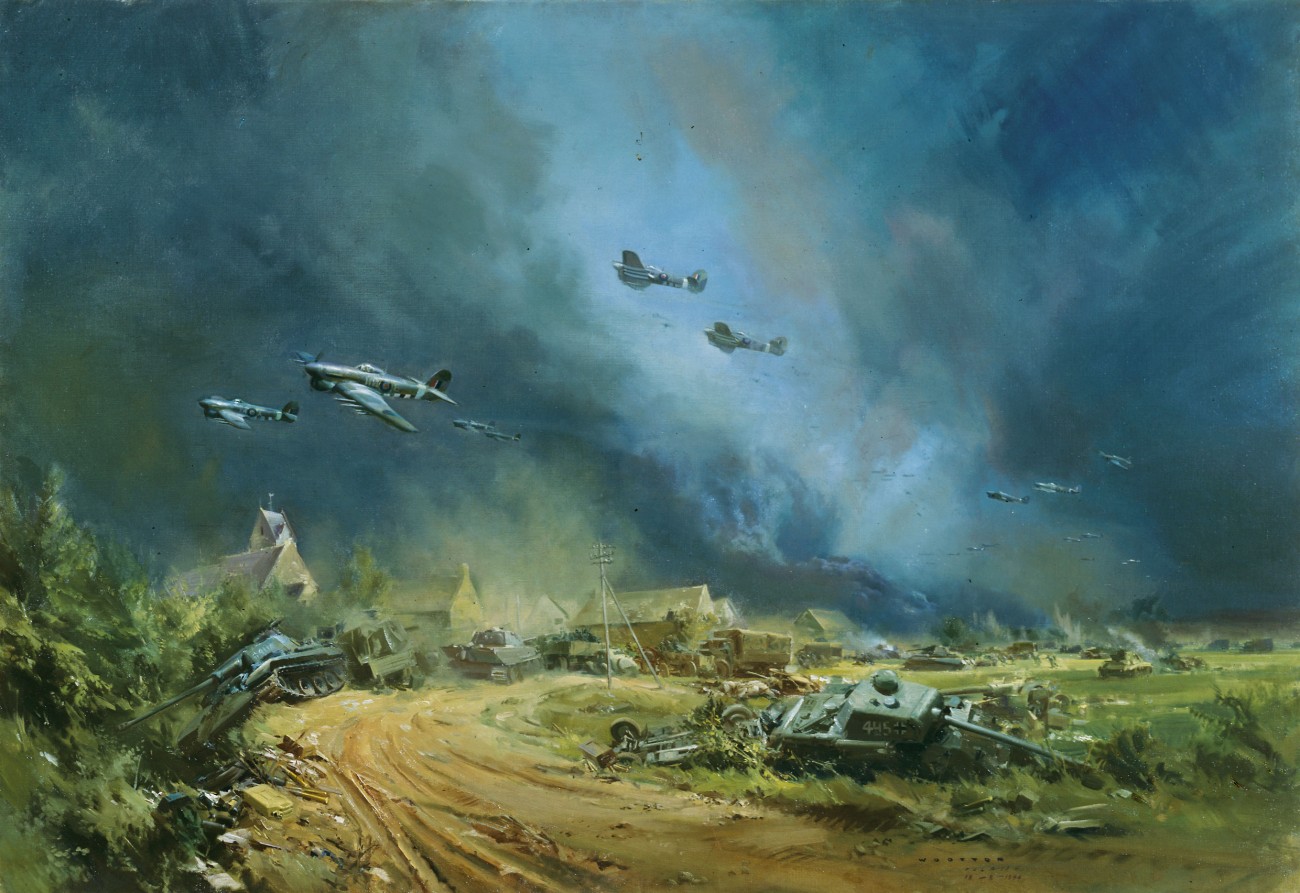 On the morning of August 19, 1944, the villagers of Saint-Maclou-la-Brière in German-occupied France looked up at the sound of an aircraft in difficulty. In the clear summer sky a damaged fighter-bomber could be seen rapidly losing altitude and heading directly toward them. It was a Hawker Typhoon of 609 Squadron, Royal Air Force, with New Zealander James Stellin at the controls.

Following the Allied landings on the Normandy beaches in June, 609 Squadron had moved its base across the English Channel to France, arriving at Plumetot, near the coast, in rain and under artillery fi re. For six weeks since then, Pilot Officer Stellin (aged 22) had flown almost daily missions against enemy tanks, motor transport and fortifications.

On Friday, August 18, Typhoons from the squadron destroyed some 20 tanks and other vehicles, and that evening, Stellin was again in action against transport on the Vimoutiers-Orbec road. Then, at 8.30 am on that fateful Saturday, he took off on what would be his last mission. With other Typhoons, he had attacked several vehicles and was heading back to the airfield when he spotted another target and asked permission to break off and attack it. Some time later, he reported being low on fuel—it is thought his plane had been hit by anti-aircraft fire.

Shortly after that, the villagers of Saint-Maclou­la-Brière saw him.

In a moving letter to Stellin’s parents after the Rocket-firing Typhoons wreaked havoc among German patrols and transports across Normandy in August 1944.war, French Resistance fighter C. Jacobs recounted what happened next.

“The plane was about 1500 to 2000 feet up and rapidly losing height. Suddenly, on realising the great destruction his plane would cause if it were to crash in the centre of the village, the pilot straightened up his plane with a vigorous and supreme effort, made a half-climb, then turning left at an acute angle, it fell rapidly, crashing less than a mile away.”

Had Stellin bailed out early, allowing his plane to crash into the village, he would almost certainly have survived. Instead he stayed at the controls and guided the plane out of harm’s way, but in choosing to do so was then too low to bail out successfully. His parachute failed to open, and on hitting the ground, Stellin died instantly.

“The entire population, as well as a number of people from the surrounding countryside and all our children, filed past to bless this airman whom the whole commune had just adopted as their own. Everyone brought armfuls of flowers picked lovingly in the gardens, and left them with deep respect and infinite gratitude,” wrote Jacobs.

“Since the first day of liberation, I have invited many soldiers…who pass through the village, to come and salute their comrade, whose grave is and ever will be in our constant care.”

France awarded Stellin the prized Croix de Guerre avec Palme medal for his selfless action, and he continues to be remembered every year in Saint­Maclou-la-Brière, where a memorial now stands.

Some 420 New Zealanders were in the Royal Air Force at the outset of World War II in September 1939. By the end of hostilities in 1945, a further 7002 had joined the RAF from the Empire Air Training Scheme. They made their mark in all thea­tres of war.