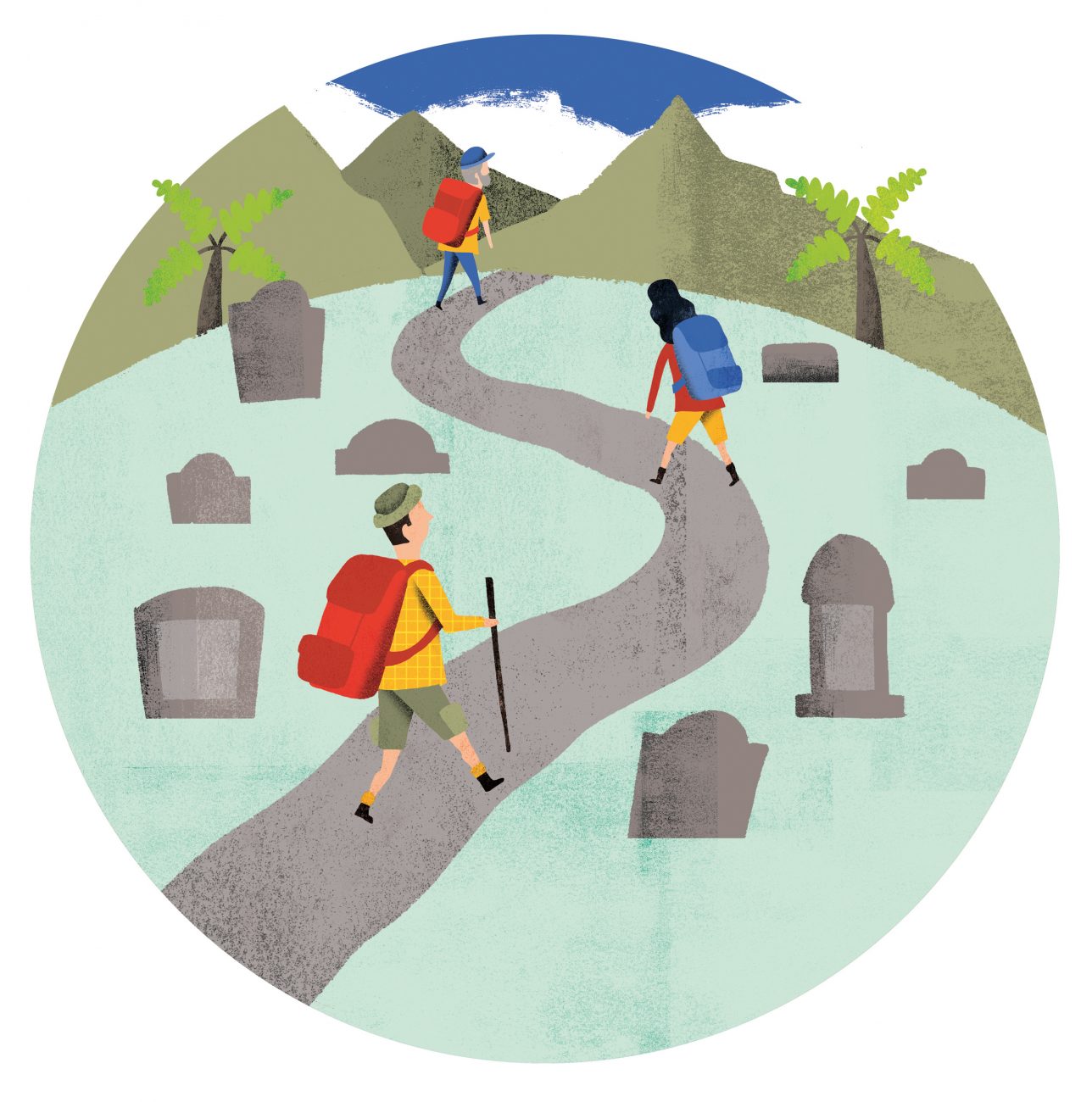 In November, four days before the fifth anniversary of the Pike River mining disaster, the government announced it would commemorate the 29 lost miners by building a new Great Walk through Paparoa National Park.

Running 45 kilometres from Blackball to Punakaiki, the $12 million Pike29 Memorial Track will be our 10th Great Walk, and the first since the concept was established in 1992. Built for both walkers and mountain bikers, and with new huts constructed, the track will take in some existing routes, including the popular Croesus Track, a former mining trail. The government says there will be a “discreet” memorial at the mine site, a side trip eight kilometres off the main track. A study of a topographical map shows this side trip involves a drop and ascent of nearly 1000 vertical metres, a trip some trampers have estimated will take 5–6 hours. In other words, it’s unlikely to be overrun with tourists.

The government has worked with the Pike River Families Group Committee on the track, which is due to open at the end of 2018. But the idea has drawn complaints from some, who say that Pike29 shouldn’t have Great Walk status and that the public weren’t consulted. In fact, consultation is happening only around changing the management plan for Paparoa National Park, which has to be extended by nearly 4000 hectares to accommodate the track.

Pike29 raises questions about who gets a say in what happens in our shared public space. Like the debacle with our national flag—and as is frequently raised in letters to the editor when a new public artwork is installed—shouldn’t we all get a vote?

Some families do not like the idea at all. Anna Osborne, who lost her husband, Milton, in the explosion, told the Sunday Star-Times that leaving her husband and the bodies of the others in a “horrible shithole of a place” was abhorrent.

“[Prime Minister] John Key promised us he would recover our bodies no matter what,” she said. “When that was a no-go, he promised to enter the mine and see if their remains were in the drift. When that became too hard, we were railroaded into the Great Walk.”

She finds the idea “distasteful”.

“Nobody has gone into the mine to try to bring out our men. My husband is under that walkway and I think it’s a sacred place. People should not be walking or cycling over it.”

Sonya Rockhouse, whose son Ben died in the mine, told stuff.co.nz that the mine site was a “shameful place” and the track was inappropriate.

“[The government has] done absolutely nothing [to retrieve the bodies] and then they’re trying to gild [the site] with this walkway. For me, I’m afraid it doesn’t work. It’s like they’re trying to appease us. I don’t buy that for a second.”

Others have pointed out that $10 million set aside to get their men out of the mine now appears to have been shifted to the construction of the walk, when what they really wanted was their loved ones’ remains.

There’s a desperate irony in building a wilderness walking track to memorialise miners killed digging coal from under trampers’ feet—from exploitation to reverence in one swipe of an official’s pen.

That conflict is reflected in much of our wilderness areas and native species—New Zealand’s answer to Europe’s cathedrals,
as the late physicist
Sir Paul Callaghan famously said.
Our attitude towards our conservation
estate veers between Instagram-ready Brand New Zealand, ring-fenced reservations with preferably zero human interference, management because we have to, and exploitation both rampant and surgical.

But access to most of our celebrated areas exists primarily because of the latter, and much of our backcountry infrastructure—bridges, tracks and the roughly 1000 huts peppered across our public land—were first built by the New Zealand Forest Service in the 1950s as places for hunters to shelter while culling deer, not for trampers to commune with nature. Without our drive to seek our fortunes, to exploit the land and its water, wood and minerals, we wouldn’t have the tracks and huts that slake modern enthusiasts’ thirst for the wilderness.

Greenstone, grazing, gold. Many current trails, including Great Walks the Heaphy, Milford and Routeburn, follow old Māori routes blazed to find pounamu. Later, settlers traipsed over them looking for grazing, and more land. Then came miners of gold, coal, and native timber—the beginning of the route up Kahurangi National Park’s Mt Owen starts at the site of an abandoned gold-mining village, and is still littered with implements and tailings. Then came tourism. It’s only been in the past half-century that masses of us have had the time and wealth to develop ‘lifestyles’.

And where there are lifestyles, there’s money to be made. Making Pike29 a Great Walk could be setting a precedent. It’s not hard to imagine that future additions to the network could be justified for a variety of local, ‘special character’ reasons, because Great Walks are a marketing success story. That wasn’t their original intention, however.

Our current nine Great Walks were established in 1992—they are, in order of popularity with Kiwis last year, the Abel Tasman Coastal Track, the Routeburn, the Kepler, the Tongariro Northern Circuit, the Whanganui Journey, the Milford Track, the Heaphy, the Lake Waikaremoana Track and the Rakiura Track. The Great Walks system—with its firmer, wider trails and expensive hut-booking system (which means a structured trip through)—helped manage their popularity. In other words, you don’t just invent a new Great Walk, it grows itself.

In recent years, with the help of Air New Zealand’s partnership with DOC, they’ve increased in popularity with tourists, and on some tracks Kiwis make up only a quarter of visitors.

“Great Walks come with baggage,” writes Mike McGavin, of the tramping blog Windy Hilltops. He points out that they go against the purpose of New Zealand’s conservation estate, which prioritises freedom of entry and the ability to explore at will.

But many spots in regional New Zealand have been clamouring for a Great Walk in their own backyard, as a way to attract national marketing muscle and tourism dollars. That means spectacular trails in other New Zealand regions, such as Fiordland’s private Hump Ridge Track, can’t hope to compete—the Hump Ridge operates at about 40–50 per cent capacity, while many Great Walks are chocka.

Will the government, buoyed by the success of the international Great Walk marketing campaign, establish more? And for what reasons? What powerful regions will be able to lobby above others, and who might miss out?

It was an unusual move making Pike29 a Great Walk, the only one wholly on the West Coast. In time, the scheme will hopefully bring more jobs and tourists to the region, ready to spend money on a holiday in one of the most striking places in New Zealand and replacing some of that lost from mining. At least that was the pitch from Environment Minister Nick Smith when he announced the track last November, saying the families were determined some good might come of the tragedy.

In making up for lost industry with new tourism, and adding Pike29 to our fabled Great Walks, the government is offering a consolation prize. The majority of the families wanted a memorial track, but it’s a sound kick in the guts for those vehemently opposed, and its ability to replace the mine’s lost prosperity is a bit of a stretch.

A more fitting consolation would be a change in corporate attitudes and strong legislation to ensure a workplace tragedy of this magnitude will never happen again. Because it’s only been five years, the men are still down the mine, and several hundred have died at work since then. It’s easy to see why the idea has attracted criticism—it’s a sticking plaster over a weeping sore that’s proving impossible to heal.