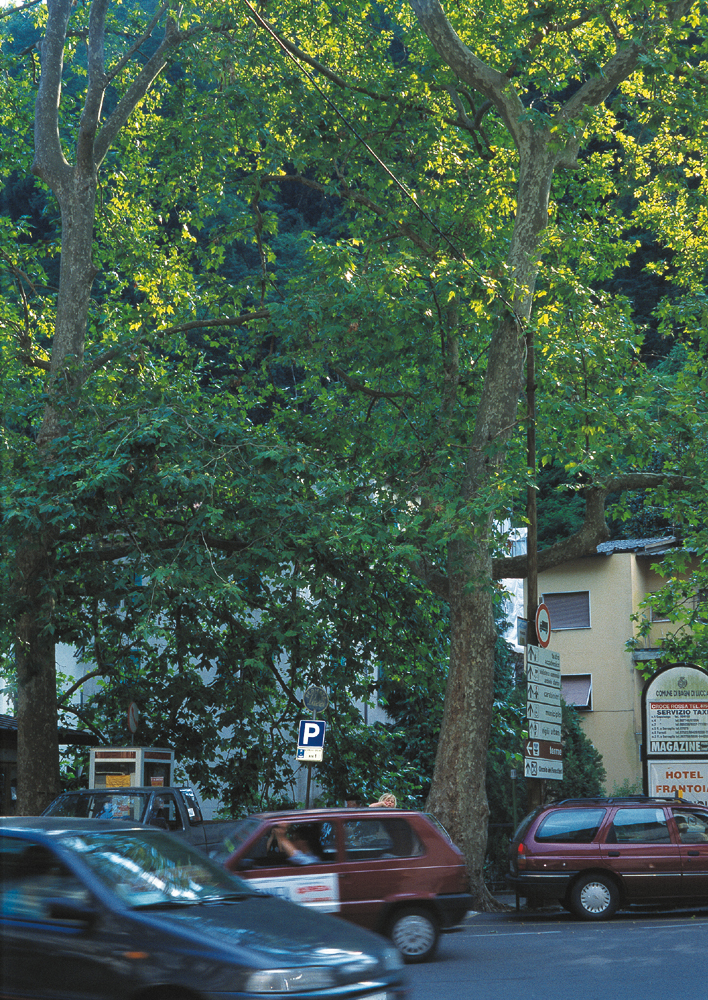 Every leaf had been polished. Or so it seemed—to my hazed gaze—as I walked out of Auckland International Airport into dazzling late-winter sunshine. But the leaves seemed so few. Returning to New Zealand from my first experience of England and Europe, after 10 weeks in a soft light filtered not just through cloud but continuous leaf canopy, I wondered where all the trees had gone.

In England I saw supermarket car-parks caparisoned with flowering cherries. Here, dogs die and groceries grill in cars parked on blistered asphalt, right underneath the biggest hole in the world’s ozone layer. Our supermarkets might boast a shrivelled row of shrubs entombed in coloured concrete at exhaust-fume level, but no one knows why they’re there. Perhaps to encourage shoppers to contribute to our exponential rate of suicide.

When I saw England for the first time, I cried. After a flight with a four­-year-old which was non-stop—except for a delay in Kuala Lumpur, where the airline put us in what felt like a hot-water cupboard for three sleepless hours—we descended over Heathrow on a balmy summer evening. I could see at a glance that England really was, as William Blake described it, a “green and pleasant land.” And as a compleat Anglophile since my first reading of Brideshead Revisited at age 17, I was instantly convinced I’d lived my life in the wrong country.

But after some sleep and sight­seeing, I noticed a certain pervasive stuffiness; the hermetically-sealed windows. Did I detect the stench of decay? Perhaps England had suffo­cated from the pressure of over­population. If so, she wears a beautiful shroud. Of trees.

Basingstoke in Hampshire is the buckle on England’s computer belt, and was our base for the excellent reason that there we could sponge off rellies. The place has always been ridiculed, not just because of The Hitch-hiker’s Guide to the Galaxy, but ever since Gilbert and Sullivan’s opera, Ruddigore. “Some word that teems with hidden meaning” says a character, “like Basingstoke.” It does seem ridiculous for a city of just 70,000 to have 48 traffic roundabouts. But they are beautiful roundabouts, thickly planted. Not as here, with squitty little pansies and polyanthus, but with trees: oaks, beeches. I couldn’t see the traffic on the other side of the roundabout—and neither did I see any collisions, dented metal, or road rage.

In New Zealand we have “service stations”—actually supermarkets which sell petrol—commanding acres of asphalt and chains of road frontage, typically dolled up with two sickly lavender bushes in “urns” of exposed aggregate. In England, you don’t notice petrol stations unless you’re.
In New Zealand, drag-racing lager louts keep holy the Lord’s Day in their own way: in the small hours, with their own high priest—the internal combus­tion engine—in the streets of suburbia. In England’s streets, speeding is discour­aged by the planting of trees in the carriageway as well as the pavement; the best we can devise to slow the dragsters is a few mounds of concrete.looking for them. They’re camouflaged with trees.

Bordering the unshaded asphalt of our streets are the same mean lawns, the same maimed shrubs and squalid little conifers, lined up four-square to emphasise section boundaries and reiterated in front gardens all over the country. Outside the 50 k limit, ill-assorted trees are trapped inside right-angled wire fences, looking desperate for escape and quite incapable of screening rusting implements and tumbledown sheds from the gaze of the tourist.

The former editor of The New Zealand Gardener, Julian Matthews, once said to me: “Tradesmen hate trees.” Is that the reason we don’t plant them? Are we scared of trades­men? Plumber-phobic? One imagines ceremonies where tyro drainlayers, builders, electricians and house-painters solemnly swear an Oath of Abjuration of Trees before graduating to ply their trade. What is a tree? A harbinger of blocked guttering, downpipes and drains, of cracked foundations, broken power lines, peeling paint.

Even our garden writers are afflicted. “Plant trees in proportion to the size of your section,” they say. At the rate the urban section is shrinking, in 10 years we’ll be restricted to bonsai. The size of your section would not be obvious to the eye, and so not an aesthetic consideration, if its boundaries were screened with trees—as expensive properties tend to be. It seems we do appreciate trees, because we acknowledge a sort of ratio of trees to government valuation: the leafier the suburb, the more it costs to live there. Properties in such suburbs tend to be designed by architects trained to aesthetics as well as practicality, who—because they charge more—over-rule the tradesmen.

As they felled our indigenous forests, New Zealand’s early European immi­grants were inspired by homesickness to plant the trees of their native lands. Later generations were naturally—and obviously—not similarly moved. They were empowered by the chainsaw to strip the land even faster, for the sowing of grass and crops. In Europe, the remains of the original tree cover is preserved in naturally-occurring groves and forests. Here plantations of Pinus radiata make Mohawk haircuts of the hilltops.

In France, the proportion of trees to people is probably about the same as in England. There are fewer people and fewer trees relative to the size of that huge country, but they are paid more attention. To the English, to modify a tree in any way is desecration, but in France they are limbed up, clipped, espaliered and pleached: all subordi­nated to the Gallic ego. And where, asIn Tuscany, as in much of Europe, mature trees civilise cityscapes. Our own overhead tangles of power and telephone lines don’t create quite the same effect.elsewhere in Europe, they are mar­shalled in a row hard up against the carriageway, they are striped with white paint. Road markers as well as shade makers.

In Europe, tree-eating machines do not leave rows of bleeding amputees along the roadsides. Trees are not slaughtered in infancy by road gangs dealing indiscriminate death by chemicals to the roadsides’ self-sown bounty. Every summer, here in “beauti­ful central Hawkes Bay,” for example, the sweetly-scented cream and gold of lupin and broom embroidering the route to town is blasted by the council, leaving gaunt grey ghosts gathered at the wayside. No chance for the native clematis, tawa, rimu and beech to regenerate. Not even for the apple trees, which once grew from cores chucked out of school bus windows, or for the birds.

This scorched-earth policy is to placate the farmers; to keep weeds out of their pasture. Farmers are no lovers of trees. It was they who abolished the bush and shipped in sheep, to pasture them in paddocks shaded from the sizzling sun only by fence-posts. If sheep were whales, the animal-lovers would he in a frenzy, but sheep aren’t endangered. That is to say, personkind is not endangered by a shortage of sheep.

Tourism’s contribution to our economy grows while agriculture’s diminishes, but in the countryside it’s still farmers who elect local bodies and pay rates. In the cities, local govern­ment policy on land use and resource is dictated mostly by businesses which cover their properties with profit-making concrete and steel, and home­owners in sprawling suburbs who expect rapid transit by car—through streets unencumbered by trees—to wherever they earn their money or spend it. He who pays the piper calls the tune.

In New Zealand there’s still a lot of land about. It is relatively cheap to buy. Purchase confers a legal right, and we know all about rights. Rights are politically correct. Their comple­mentary responsibilities are not; of them we know little and care less.

In New Zealand, land ownership confers a right to neglect and vandal­ise. If adults desecrate their own trees, land and buildings, they can only expect youth to emulate them by uprooting municipal plantings. They’re simply upskilling for the day when they can chainsaw their own trees. When they tag public buildings, they’re just experimenting with the sort of style and colour scheme they will one day perpetrate on their own properties. That’s rugged Kim i individualism.

Please God, the Kiwi will never be a conformist. We will not meekly do as the English do, and lower our voices in public, stand endlessly in queues, paint our houses the same colour and plant the same trees as everyone else, because we’re told to. But it is time to construct an aesthetic imperative to balance the pragmatism of our forefathers. And it is time for honesty about the past. We have scalped this land. We have taken New Zealand’s trees for a trophy. It is time to give them back.