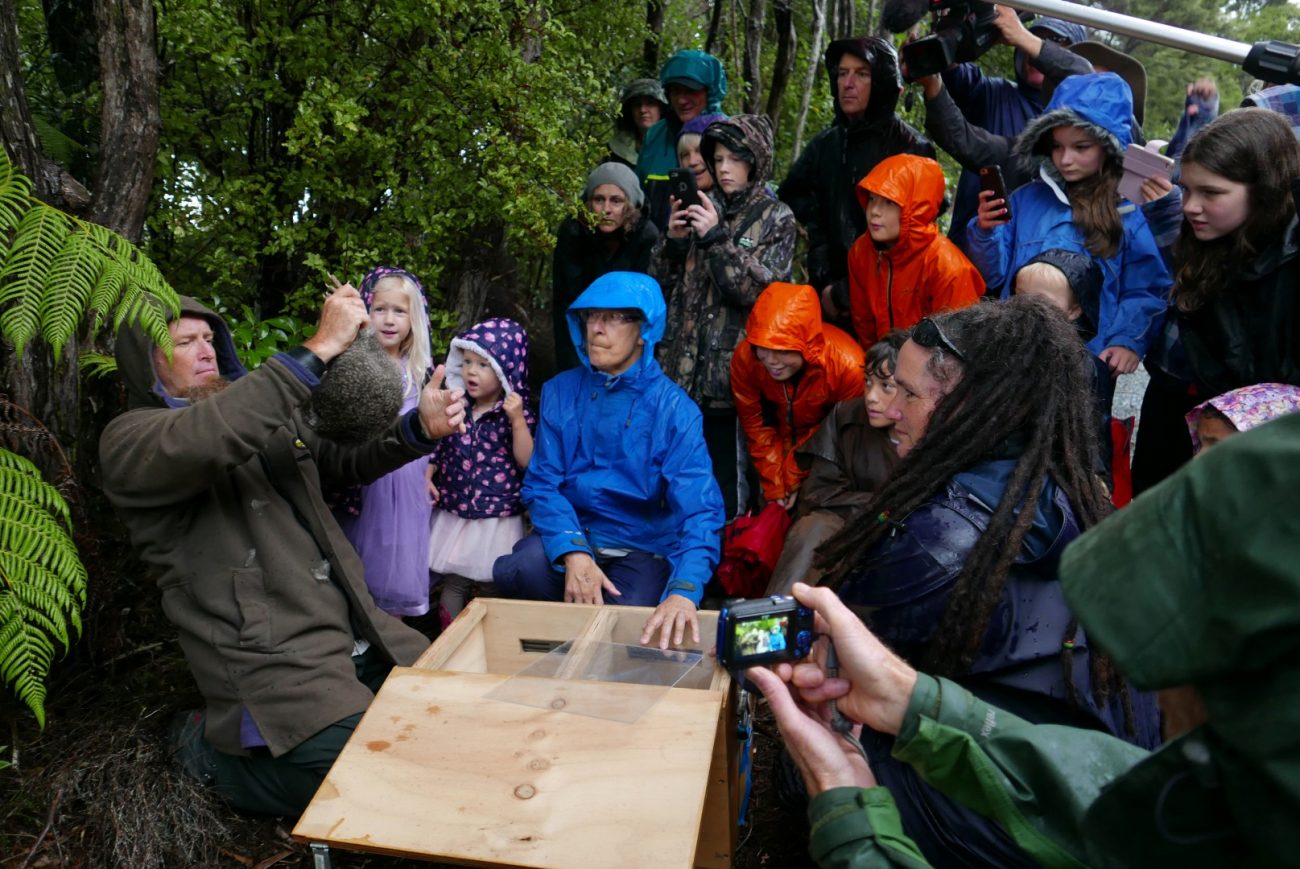 I had cause to reflect on this aspect of their personalities while watching Auckland Council wildlife ranger Matt Maitland methodically and painstakingly attach radio transmitters to the legs of little spotted kiwi at Shakespear Regional Park on the weekend. The birds lay placidly in his arms as he worked, their beady eyes squinting in the light and bills draped nonchalantly across his hip.

They had already been gazed at, oohed over, stroked and photographed by dozens of Aucklanders who had come to the park for the opportunity to see the country’s smallest and second rarest kiwi. Soon they would be released into the regenerating forest of the park, less than an hour’s drive from central Auckland.

Shakespear has been predator-free (with the exception of mice) since 2011, when a 1.7-kilometre predator-proof fence was built across the narrowest part of the peninsula, enclosing an area of 500 hectares to become a mainland wildlife sanctuary.

The release of kiwi to Shakespear was the second time this month that the national bird has been reintroduced to parts of Auckland from which it had long since been eliminated by predators. In early April, six North Island brown kiwi were liberated in Hunua Regional Park, with another 30 or so to be added over coming years. For Shakespear, the species chosen for reintroduction was the little spotted kiwi, or kiwi pukupuku.

There is no predator-proof fence in the Hunua park, so the safety of the kiwi there relies on an effective trapping and poisoning regime. Shakespear, while having a barrier fence, also has 10 km of open coastline where a predator could potentially come ashore. But as Tiritiri Matangi Island—a mere three kilometres east of the sanctuary—has shown, once predators are kept under control, native species flourish.

In fact, Tiritiri has retained its net adult population, because the 10 birds shifted to Shakespear were replaced by 10 newcomers from Kapiti. Kapiti has a breeding population of some 1200 kiwi pukupuku, close to the maximum number the island can support. It is considered a “kōhanga” site for little spotted kiwi—a nursery for raising birds for relocation to new kiwi sanctuaries.

Little spotted kiwi were once the most widespread of Aotearoa’s five kiwi species. But, being the smallest, they were the most vulnerable to predators, and, unlike other kiwi species which grow large enough to repel predators, little spots are susceptible to stoat predation even as adults.

Populations have been established on a handful of predator-free islands and three mainland sanctuaries: Zealandia, in Wellington, Cape Sanctuary, on Cape Kidnappers in Hawke’s Bay, and now Shakespear.

The new inductees to Auckland’s mainland will be monitored by radio transmissions—the standard method for keeping tabs on the wide-ranging birds.

Attaching transmitters to kiwi legs is laborious. Maitland uses a hospital baby bracelet plus two layers of insulation tape. The idea, he said as he worked, is to make the transmitter (about the size and colour of a chestnut) secure enough not to slip off the leg, but not so secure that it can’t be broken off if, for some reason, the device becomes jammed in a crevice or thicket while the bird is foraging. Batteries last for a year.

Once Maitland had attached the last of the transmitters, a convoy of well-wishers travelled to a forested area where shelters had been built to receive the kiwi.

One of the birds received a special send-off. It had been one of the founding Tiritiri kiwi, released in the early 1990s. Now at least 25 years old, it is part of the pioneering group on the mainland. In the absence of predators, little spotted kiwi have a life expectancy of more than 40 years, so this female could well contribute several chicks to the Shakespear population over the remainder of its life.

Shakespear is an open sanctuary, and the public can freely visit the park and wander its trails, meeting a variety of forest, wetland and coastal birds, along with several species of gecko and skink.

Campers at the park’s campgrounds can expect to hear the trills and whistles of the new arrivals—a rare opportunity and testimony to what can be achieved in the cause of ecological renewal.

Such reintroductions of endangered species to country they had once roamed freely always feel special. In these places, as the eponymous bard put it, “All losses are restored, and sorrows end.”