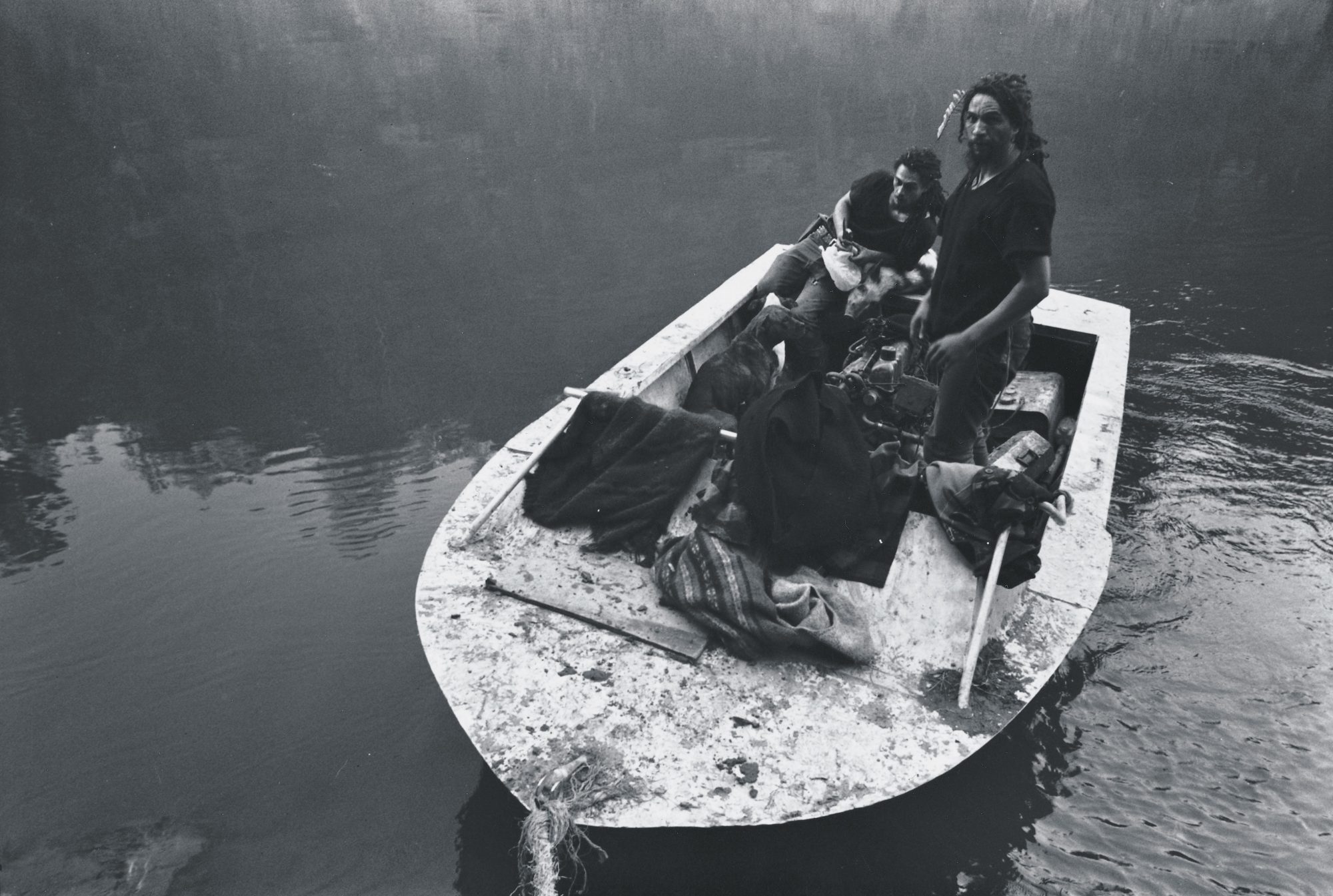 I first heard of Tieke marae at the Bridge to Nowhere, that surreal monument to shattered dreams deep in the Mangapurua valley. A friend and I were kayaking the Whanganui, and in the midday heat of the third day we had taken a break to wander up a track and poke about the decaying, overgrown remains of the old soldier settlement. Here veterans of the First World War struggled for decades to convert widerness to pasture, but the task was beyond them, and they walked off their farms in despair.

It was at the bridge that we met Paul Haitana, an imposing heft of a man with riotous hair held in check by a white headband. “Baldy,” as everyone called him, was a possum trapper and jetboat tour operator who, if only a little of his story were true, saw more of life in a year than many people do in 10.

After a discourse on the evils of possums, the chicanery of government policies on the river and the joys of Autapu rapid—which brought out fine white teeth—Baldy ran a hand over his beard, as if to make way for a new subject. “Of course you’ll be stopping at the marae,” he said. “Tieke. They do a good dinner. Everyone stays there.”

A broad fan of shingle marks Tieke, with maybe a rental kayak or a scatter of Canadian canoes hauled up on the stones. The closest road is unsealed and ends abruptly some 12 km short of the marae, back over folded razorbacks. As far as anyone here knows, it is the only marae in the country you need a boat to get to.

Our arrival in the late afternoon stopped a volleyball game up on the grass terrace. Francis, a lean Maori in his 20s, picked his way down the bank to greet us and to recite the rules: no alcohol, no drugs, no firearms. As well as being home to several families, Tieke is now a place where wayward young Maori come to be healed and taught something of their culture. Francis was standing in for his father, the marae’s leader, Larry Ponga. Business connected with the release of native birds had taken Larry downriver.

Francis helped us carry our things up the bank, then led us to the powhiri, an almost daily event in the tourist high season. When the singing and speechify­ing was done, we were shown to a dirt-floored whare kai roofed by a canvas tarpaulin. Here, by the glow of an open fire, we ate and drank and swapped yarns. A child tottered about the tables, colliding now and then with a small dog.

Other people drifted in for dinner. After the meal, Francis, who traces his ancestry back 24 generations, told something of the history of the place. He belongs to Nga Rauru, a subtribe of the main Whanganui tribe, Te Ati Haunui-a-Paparangi. In times past, the Manganui a to Ao tributary 12 km or so downriver was the major access route to the central North Island, its sheltered valley heavily settled and Tieke a trading hub, a place of learning and a fortified pa. The kainga once boasted a carved meeting house. Francis pointed to the spot where it had stood. Behind screens put up to protect it from the gaze of women, a you whenua—a land pole—now lay there. When finished, the carved totara pole would stand on the terrace, a marker of belonging.

The land had slipped from tribal ownership in confusing circumstances early this century. Some Pakeha claimed that the chair of the Whanganui River Trust had made a large payment for the land in Tieke’s meeting house in 1906. They were sure of the date, they said, because news of Richard Seddon’s death had come through while the meeting was in progress. Within two years the marae was abandoned, its people drifting off to Parinui and elsewhere. No records of any agreement survive, however, and a sense of injustice has lingered, heightened in the early 1990s, when the Department of Conservation, which administers the national park through which the river runs, began levying a toll on river users to maintain its huts and services. One of its huts was at Tieke.

The response wasn’t long in coming. One day in September 1993 a group of Maori arrived by jetboat and stepped ashore to reclaim the land. They are still there.

The Department of Conservation but is now a sleeping hall, with the whare kai built onto it. Apart from occasional interventions by building inspectors and the like, the occupation has so far gone unchallenged. The tourists seem to like it that way, and you’d be pressed to get more generous kai along the length of the river.

But life here is not easy. Its one thing to be in the midst of fine bush, with venison and pork for the taking. It is another to endure the unending isolation and the vagaries of nature. Last Novem­ber the river rose 20 metres in flood and took away the land pole. It was recov­ered, but not much could be done about the vegetable garden that the flood carved out.

“Heaps of spuds down there now,” said someone at my side as we stood on the bluff looking south towards Pipiriki.

On the grass nearby was an alu­minium runabout, ingeniously cut through the waist and lengthened. Tieke is an outpost of make-do, a place where each day brings the chance of a small victory, and a brush with the undertow of defeat.

In the morning, before leaving, I watched some lads attending to a pair of broken binoculars. They were sitting at a table under the tarp, surrounded by bits of the mechanism. One cleaned a small cog with a rag. Another held a prism to the light, amused by the way everything inverted. There seemed little hope of the thing ever working, but now and then someone wisecracked and they all laughed.

It seemed as good an emblem as any for the way a life gets put together on the river.

A few kilometres upriver from Tieke is the Bridge to Nowhere, a concrete testament to failed efforts to farm this difficult country in the years following the First World War. Tieke’s history could equally have ended in abandon­ment and despair, but a new genera­tion is determined to achieve self-reliance here.

The river is the thread that binds Whanganui Maori to this land. It provides a sense of place and history for river families, who trace their origins to this bend or that tributary. This is their tupuna awa—their ancestral river—and to be in its moody waters is to be connected to all that has gone before.

A few years ago, many of the young men who are now at Tieke would have laughed in your face if you had asked them their genealogy. Today they know their place in history. Though life on the river is far from easy—whether keeping motors running or keeping food on plates—the family at Tieke says it is here to stay.

Thousands kayak and raft the Whanganui River each year. Most will stay a night at Tieke, where a warm marae welcome—and hot kai­rekindles body and soul after a hard day’s paddling. For many visitors it is their first time on a marae, and the experience is a highlight of the trip. Koha from appreciative guests help keep the marae financially afloat.

Since resettlement in 1993, the fire at Tieke has never gone out. Just as well, for there is no electricity here. David Taku collects fuel, and the fire burns on.

A family of small differences

The alignment of ideals