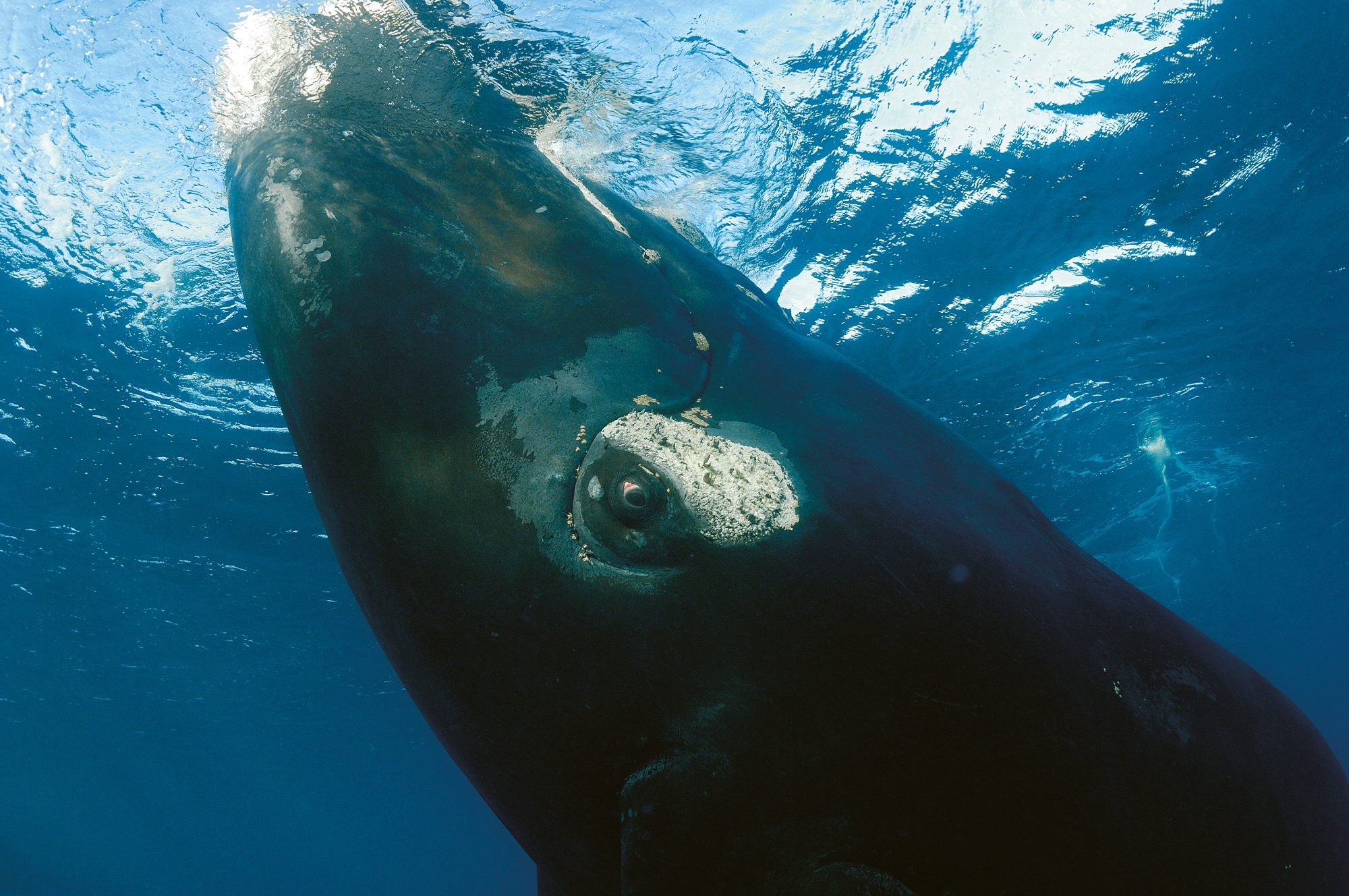 After spending a year and a half photographing North Atlantic right whales, National Geographic photographer Brian Skerry had not been able to capture a frame under­water. As well as being wary of humans, their numbers are perilously low—only 359 individuals have been identified.

To get those images, and to find a population of right whales not compromised by the pollution and shipping traffic of the United States’ eastern seaboard, Skerry and a research team from the University of Auckland chartered a boat to the Auckland Islands. After two days at sea, they slipped into Sandy Bay at Enderby Island.

“Even before we had dropped the anchor, we were mobbed by a dozen whales,” recalls Skerry. “It was as if the natives had rowed out to meet us.”

Few divers had entered the water with these whales and, given that some were very young, Skerry knew that it may be the first time many of them had encountered humans. He took a precautionary approach, initially de­ciding to dive alone and so avoid spooking them. But he needn’t have been concerned. The whales were intensely curious, circling, even nudging him—sometimes it seemed even competing for his attention.

On one occasion, Skerry was seeking the attention of a whale on the surface. He simply eye-balled it and waved—as if to ask if it wouldn’t mind participating­ then swam down to the bottom. Curiosity piqued, the whale followed him.

“Here was a 45-foot, 70-tonne whale following me like a dog,” says Skerry. The whale interacted with him and his assistant for an hour before they had to return to the boat to change tanks. When the divers came back, the whale was waiting, and the shoot continued for another hour.

It was exhausting: “I can remember swimming along the bottom, and kneeling on the sand to catch my breath,” says Skerry. “The whale stopped as well, turned around and looked back, actually waiting for me to catch up.

“It’s this sort of behaviour that really speaks to their name—they were the ‘right whale’ for whalers to target because they were large, slow, curious and easily ap­proachable—all attributes which led to their demise.”

It must have been like shooting fish in a barrel. According to whalers’ records—incomplete at best—they had flensed 38,000 southern right whales in the South Atlantic, 39,000 in the South Pacific, 1300 in the Indian Ocean and 15,000 in the North Pacific, all before the global ban on whaling the species in 1935. Whale populations in New Zealand waters were among the most intensively exploited in the world—the take peaked at 2288 whales in 1839, involving some 150 ships and 80 shore stations. As a result, southern rights simply vanished from the mainland coast, and sight­ings are now rare.

Curiously however, whales and whalers largely ignored the Auckland Islands during the 19th century, now the most important wintering grounds for southern right whales around New Zealand. A whaling station set up in 1849 at Port Ross was closed down three years later, after only a single whale had been caught. All was quiet until the Soviets illegally caught 256 southern rights between 1960 and 1971, although they kept it a state secret until 1994, well after the collapse of the USSR.

This southern citadel, protected by the ravages of severe weather and a 250-nautical-mile moat of Southern Ocean, has become a sanctuary for the southern rights, which have multiplied to more than 1000 individuals. But while numbers in the subantarctic islands seem to be increasing at close to the maximum rate of seven per cent annually, this has not been reflected in sightings near the mainland. If they are separate populations, the DOC conservation strat­egy says, the mainland whales may be in great peril.

A tip-off from a helicopter pilot in June this year alert­ed DOC staff to a group of 10 rights in Te Waewae Bay, west of Invercargill, and researchers seized the oppor­tunity. Within a few furious hours they had taken tissue samples from five whales. Together with 34 samples previ­ously collected from the mainland and 730 taken between 1995 and 2007 in the Auckland Islands, they hoped it would give some indication of whether these different populations ever mixed.

The results provided cause for celebration. Rather than a small sub-group in gradual decline on a geographic out­post, four of the mainland samples matched the genotype of whales sampled in the Auckland Islands, indicating that the populations were one and the same. This implied that population growth in the Southern Ocean should eventu­ally lead to a recovery in the numbers around the New Zealand mainland.

But the tissue samples revealed something else as well. The New Zealand southern rights have the lowest genetic diversity reported for any endangered population of whales in the world—as low or lower than that of the maligned North Atlantic species. In fact, it is consistent with a popu­lation reduced to just 25 mature females. Only now do we realise how comprehensive was the whalers’ catch, and how close the species came to total annihilation.

“Populations that are driven to these low numbers are more susceptible to catastrophes, including the outbreak of diseases, and chance events affecting reproductive suc­cess, such as an imbalance in the sex ratio,” says Scott Baker, principal investigator on the study. “And unlike abundance, once lost, genetic diversity will take thousands of generations to recover.”

Even though the recovery of the Auckland Island whales has been spectacular, attaining pre-whaling populations may take some time. Population models developed by the University of Auckland, DOC and the Australian Marine Mammal Centre have revealed that there were once many more whales than previously assumed—some 28,000 south­ern rights in New Zealand waters alone, almost three times their current global population. At current rates of growth, they will take more than 120 years to recover to 95 per cent of their pre-whaling population. However, once they reach 54 per cent of the historic population—estimated to be by 2063—International Whaling Commission agreements mean that whalers can once again actively target southern rights as they migrate through international waters.

Nevertheless, the gruesome industry of whaling has provided an experiment in ecosystem dynamics on a grand scale. By studying the collapse and recovery of the south­ern right population, scientists are learning more about the recovery of other populations of endangered marine mammals and the effects of limited genetic diversity. The population growth of the southern rights, and apparent health of the individuals around the Auckland Islands, is a perfect demonstration that lack of genetic diversity is little barrier to recovery—a point not lost on those seeking to conserve the North Atlantic species.

But the Auckland Island whales will always carry the genetic scars of the human lust for their bones, baleen and blubber. It’s inscribed not only on their DNA, but also expressed on their skin. Disproportionately high numbers of pale and brindled animals—whales with mottled com­plexions or pinto patches of white—provide physical evi­dence of the genetic bottleneck through which they have been squeezed, blots on the record of human society that can never be erased.