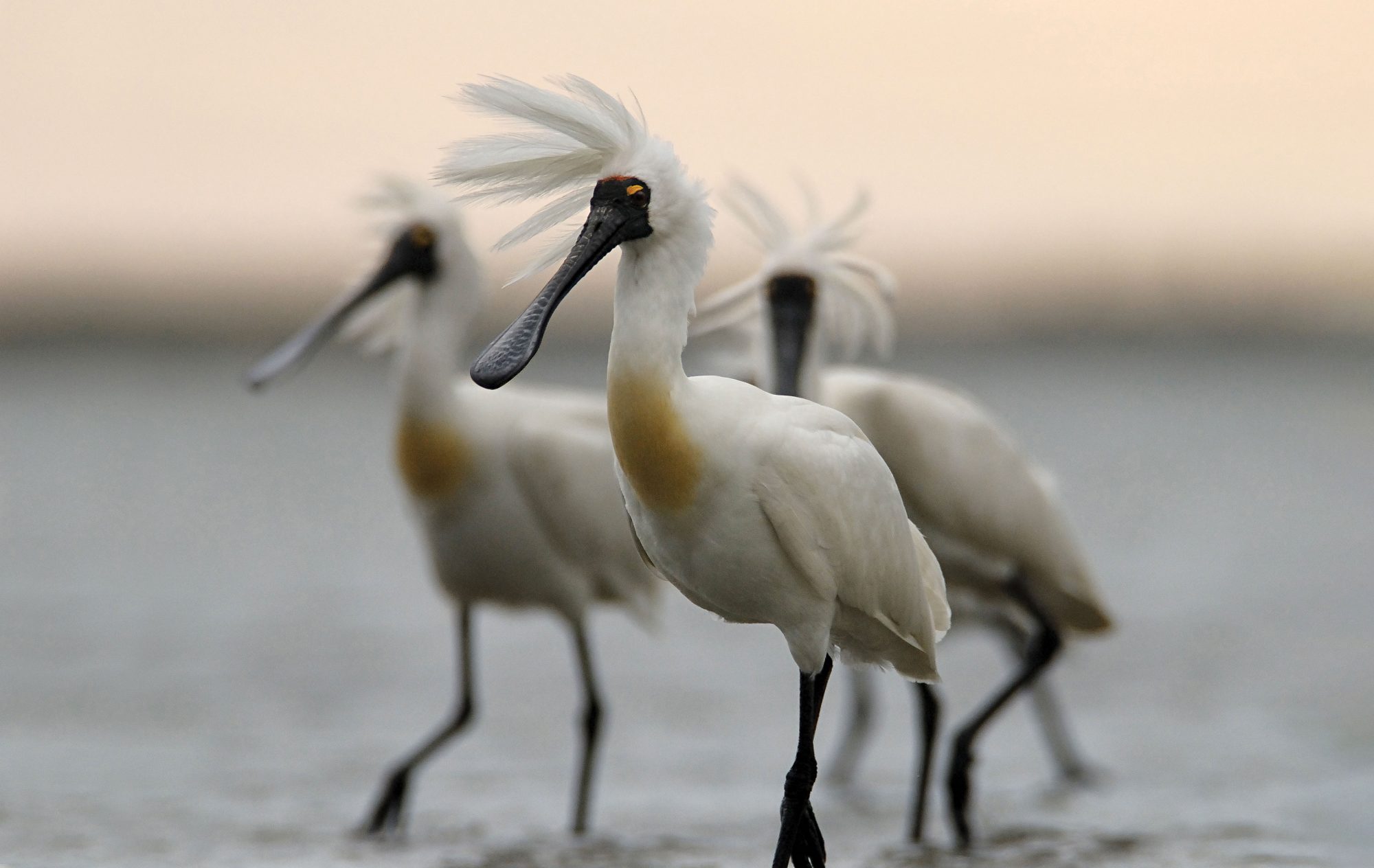 The ebbing tide is at last beginning to slow. The moon has again heaved 60 million cubic metres of water out of Waimea Inlet, the South Island’s biggest estuary, leaving the mudflats gleaming in the day’s last light. But the spoonbills are in no hurry to feed. Twenty-seven rest on a sandbar, all in the same position with one leg drawn up. They keep their big black bills tucked under a wing, as though worried I might laugh at them.

Their eponymous beak is one of the most absurd among birds, but as the sun settles behind the Wharepapa/Arthur Range, these spoonbills remind me why it’s also one of the most ingenious. They’ll hunt tonight, under a filling moon, but they could gorge in pitch darkness if need be: those spatulate mandibles are lined with sensors that can detect tiny vibrations in the water. One of the birds has decided not to wait, however. I watch it wade a narrow channel downstream, sweeping its bill from side to side through the dirty water. It looks like a hopelessly speculative endeavour. For the sheer junk science of it, I count the bird’s paces between successful strikes. There are futile transits of 20 strides or more, then rich diggings where the spoonbill gulps down some worm or crustacean every four or five steps.

I can’t reconcile that hunting prowess with a beak you could use to mix mortar. Turns out proper science couldn’t either, not until the 1990s, and it took an aerospace engineer and a bicycle wheel to figure it out. Suspecting that, hidden below the waterline, a spoonbill wields some secret evolutionary superpower, Daniel Weihs from the Israeli university Technion taped a spoonbill skull to a bike wheel, sprinkled some molluscs in a pond, laid the wheel on its side, then pedalled it back and forth, scything the skull from side to side. Like magic, the molluscs were hoovered off the bottom.

Weihs had discovered that a spoonbill’s mandibles make the perfect hydrofoil—a kind of wing, flat on the bottom but convex on the top. On an aeroplane, that shape creates the lift that carries you to other countries, but as it passes through the air it leaves an eddy at each wingtip. In the waters of Waimea, the spoonbill’s beak is causing a similar swirling gyre—Weihs called it a “bill-tip vortex”—that sucks invertebrates out of hiding and into suspension in the water. The sensors in that triumph of a beak then pick up the disturbance, and the bird secures its prey.

The bird I’m watching leaves the channel to investigate an old tractor tyre in the mud—someone’s old mooring. It circles the tyre, probing beneath it. I can’t see what the spoonbill finds, but it lifts its bill to let its catch slide into its grateful gullet. In 2004, ornithologists watched spoonbills feeding along the coasts of southeast Asia and noted each success. Out of 1684 observed bill-sweeping forays, 65 per cent ended with a meal. The birds caught, on average, 45 small prey and 1.3 large every ten minutes. So, who’s laughing now?

Well, lots of people, actually. The bird’s Māori name, kōtuku ngutupapa, describes a “white heron with big black lips”, which is right on the money, but does nothing for the poor creature’s self-esteem. You’d expect ornithologists to summon a little reverence, but even the normally sombre New Zealand Birds Online website has a chuckle: “In flight, birds hold their neck outstretched and trail legs behind, looking rather awkward, like a Dr Seuss cartoon bird.”

As I watch the flock take flight against the twilight, I’m outraged on their behalf. It’s August, which means they’re dressed to impress. They always wear a black mask—bare skin about the face—but when courtship season rolls round, they dot it with a brilliant yellow eyebrow that makes them look variously gorgeous or grumpy, depending on the light. They sport a mustard-coloured flush on their breasts, and their eyes go as red as rubies.

Spoonbills were exclusively Australian until 1861, when one was spotted at Castlepoint, in the Wairarapa. A few more were sighted in the early 1900s, but it wasn’t until 1949 that the species was confirmed to be breeding in New Zealand, at Ōkārito, next door to the kōtuku colony. That meant the spoonbill wasn’t simply a visiting bird—it was now a native species.

For years, spoonbills seemed to flatline, says Te Papa curator of vertebrates Colin Miskelly. A national census in 1977 counted just 52 birds. Then, something gave them a shot in the wing.

“They were a rare bird till the 80s,” says Miskelly, “but now they number in the thousands, and there are many more breeding sites. It’s a bit of a mystery why they expanded so rapidly.”

In 1979, the birds started a second colony at the Wairau Lagoons in Marlborough, and by 2005, there were 10 more colonies, many of them in Otago. Another census in 2012 estimated there were 2360 royal spoonbills in the country, breeding at 19 colonies.

Ornithologists say it’s possible numbers were boosted by more immigrants from across the Tasman, but no one knows for sure, because “royal spoonbills are singularly unstudied”, as Miskelly puts it.

Mary Thompson has tried to fix that. The Otago representative for Birds New Zealand—what used to be the Ornithological Society—co-authored a long-term research project on the birds. “It’s one of the most detailed studies of spoonbills that’s been done,” she says.

Between 1989 and 2006, Thompson’s co-authors, Birds New Zealand volunteers Peter Schweigman and William Cash, fitted coloured identification bands to the legs of chicks at Green Island, Otago, and the Wairau Lagoons—158 birds in all. Then they asked birdwatchers around the country to get in touch if they happened to spot any of the birds.

“There were probably only about 1000 spoonbills in New Zealand at that time,” says Thompson, “so every one of them could be checked to see what bands they had.”

Over the next 21 years, the banded spoonbills were spotted 1358 times. “The resighting rates were astounding: 80 per cent of those birds were seen again, and 70 per cent of them were seen multiple times over consecutive years.” 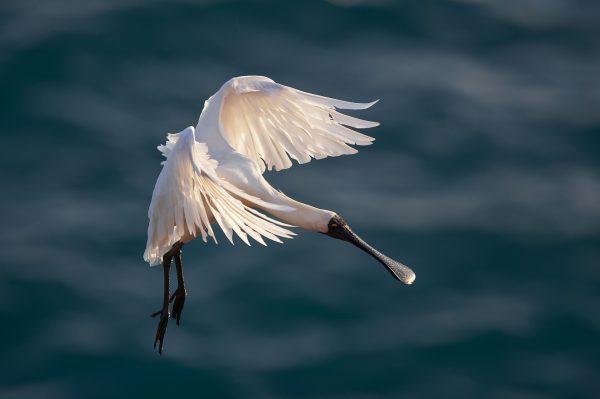 From year-on-year resightings, Thompson could calculate the spoonbills’ survival rate, which was about 90 per cent. “That means only 10 per cent of the population was dying off each year, which is pretty good—the mean life expectancy works out at eight to nine years.” But the outliers were astounding: “People have since seen four birds that are 25 years old.” Then, to my delight: “And one or two of them have been seen in your estuary, actually—the Waimea estuary.”

The study showed that spoonbills breed overwhelmingly in the south (there are just a couple of North Island colonies), raising their chicks through the summer at Ōkārito and other places like the Wairau Lagoons or Green Island, off Dunedin’s Brighton Beach. Once the chicks are autonomous, almost all the birds head north for the winter. A few make half-hearted migrations, but an astonishing number don’t stop until they almost run out of land: the most accomplished travellers fly more than 1200 kilometres in a year. Their favourite winter haunts are Pārengarenga Harbour, just a few kilometres short of New Zealand’s northernmost point, and Rangaunu Harbour, at the base of the Aupōuri Peninsula in the Far North. Others, clearly less fussy about their holiday digs, overwinter at the Māngere sewage ponds in Auckland.

But why spend all that effort flying up and down the country when you could just stay in the balmy north all year round?

“There are all those huge estuaries in Northland—bigger than we have down here—and you’d assume they’re very productive,” says Thompson. “So why do they turn round and fly all the way back here?” She wonders if some dietary preference, some calorific demand of breeding, is the smoking gun, but nobody knows.

This migration mystery is all the deeper for the fact that royal spoonbills in Australia—the source population of ours—are mostly homebodies. They don’t budge for anything less than a full-on drought. That gets ornithologists pondering the possibility of genetic disposition. Given the spoonbill’s ancestors were trans-Tasman adventurers, might it follow that migration literally runs in the blood here in Aotearoa? Our spoonbills’ ancestors, Thompson points out, weren’t just blown here by a westerly gale. “They meant to fly here, so we may have a sub-population of the Australian birds that just likes to travel, as though they have some sort of genetic propensity. But that would be very hard to prove.”

The flock I’m watching this August evening on the Waimea Inlet may be juveniles that haven’t yet left home—some youngsters don’t venture far in their first year—but they may equally be adults, stopped for a rest on their homeward journey from some distant northern reach. If the latter, they’ll need to be back at their breeding grounds by October at the latest, because competition for the best nest sites is fierce.

The juveniles among them—spoonbills start breeding at age three—will join singles’ gatherings of unpaired birds of both sexes that display to one another at the edges of the colony, stretching their necks, clapping their bills and flapping their wings. Often, it’s the females that approach the males, who sometimes drive them off. A new pair will seal the deal with a synchronised figure-of-eight display flight, their primary feathers held stiff and exaggerated to generate as much wind noise as possible. Then there’s a great deal of bowing and bill clapping, and that’s the moment for those long white head plumes to shine. The birds will preen one another before getting it on.

As far as anyone knows, royal spoonbills are monogamous, but research on two of their overseas relatives—the Eurasian spoonbill and the roseate spoonbill of the Americas—has revealed those species are not above a bit of EPC (extra-pair copulation). A Spanish study of Eurasian spoonbills caught 60 per cent of males and 75 per cent of females enjoying a bit on the side, usually while their nominal partner was away fetching sticks for the nest. Males that suspect a dalliance in absentia try to cancel it out by copulating with their mate immediately on their return. Biologists call this “sperm competition” and, frankly, it sounds exhausting. There’s a good chance that royal spoonbills do it, too, because 90 per cent of all bird species have been recorded indulging in EPC—including the spoonbill’s near relative the heron, and some more distant ones, like the stork.

It’s one more thing we don’t know about these immigrants to our shores. “It all makes them such an interesting bird to study,” observes Thompson. She says the answers will come, because twitchers—birdwatchers—are smitten with this “big, charismatic” species that practically colonised the country’s harbours right before our eyes.

The ones I’ve been watching at Waimea Inlet are now lost to the dark. Maybe tomorrow, at the beck of their wayfinding ancestors, they’ll take wing. They’ll flash in the sun, circling the estuary before their compass settles on some homeward bearing. They’ll set their steady course untaught, keeping their secrets close.