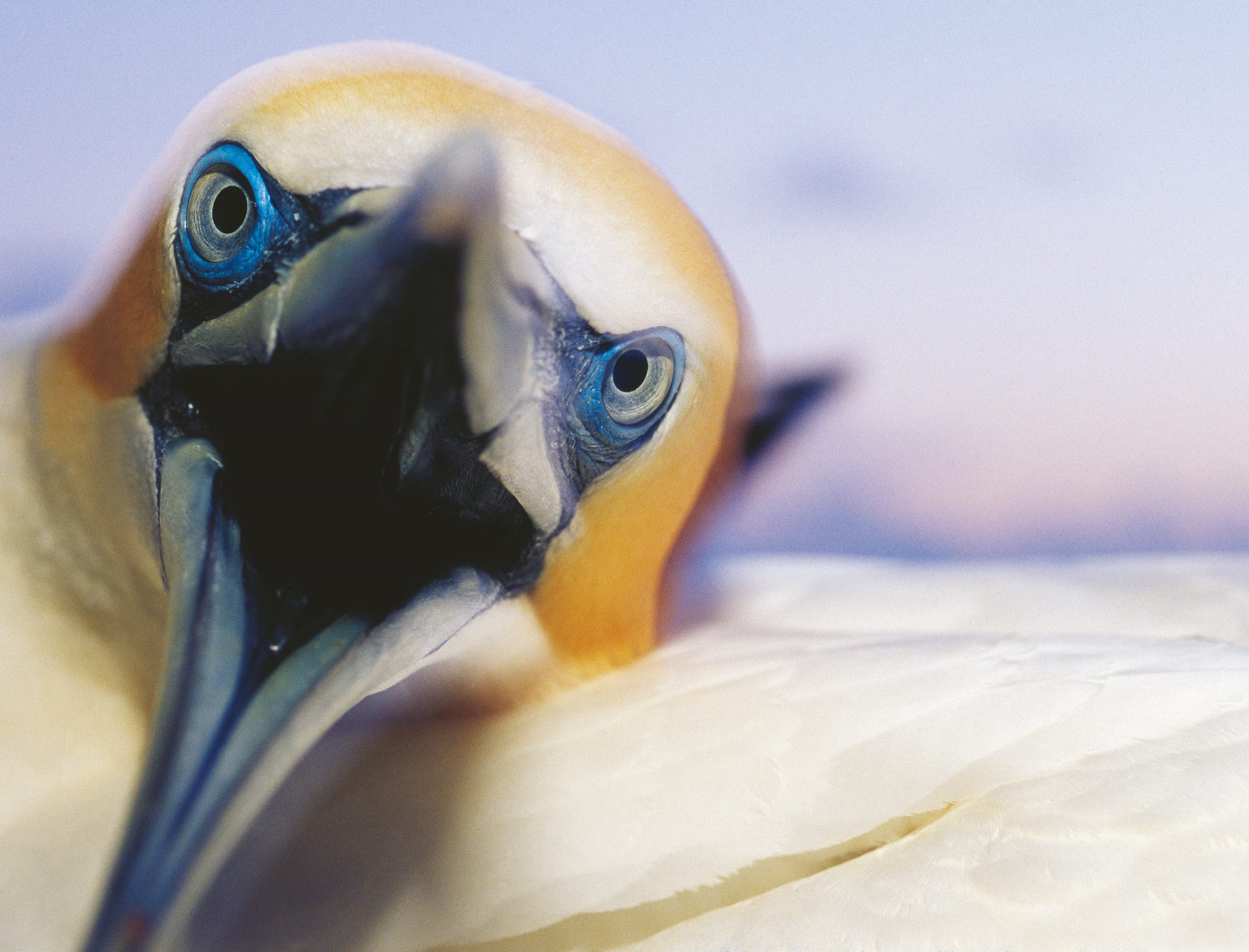 As a keen surfer I have spent many an evening on the shores of Auckland’s untamed west coast, a wilderness where dramatic sunsets suffuse both ocean and cliff with wine, and gannets streak low across the water in a race against the dark. Those birds enthralled me. At times a handful of them would join me in apparent enjoyment of the waves, surfing down pockets of air compressed ahead of peaking rollers, mere centimetres above the surface. While I clumsily flailed to get a ride, they would sweep effortlessly past, sometimes almost within reach.

Later I discovered they were returning to New Zealand’s northern­most mainland breeding colony on the headland south of Muriwai Beach. Pairs—typically reuniting after one partner has been at sea searching for food while the other looks after their chick—go through a systematic ritual of beak tapping, head shaking and quiet mutual preening. With birds regularly separated much of the day, pair-bonding in this way helps to strengthen the relationship. School fish (anchovy, pilchard, yellow-eyed mullet etc) and small squid are their main source of food. As shoals of the silvery morsels are spotted—often from a considerable height­ gannets launch airborne attacks that carry all the punch of an air­to-surface missile.

Seeing such frenzied attacks, one marvels at how rapidly this slender, graceful bird can transform into a deadly projectile. Plunging at up to 145 km an hour from as high as 30 metres above the sea, the birds can seize fish 10 metres underwater. Small fish are swallowed where they are taken but larger specimens are carried back to the surface for eating. Actually, it’s surprising that the gannet is able to catch anything. You might expect the skull to fracture or its neck to snap upon hitting the water. However, special air sacs around the chest and neck cushion the impact and the front of the skull is strong.

Though gannets are fluent in water and air, landing back at the colony is not without hazard. Winds whip and jive around the exposed cliff-top the birds call home and they try to settle on a plot not much larger than a pizza. If the wind doesn’t get them, their neighbours will likely have a go. Gannets are fiercely territorial and will defend their meager estates with great ferocity. Sharp serrated beaks are powerful weapons against neighbours who sometimes stray too close. Countless times I have witnessed attacks on incoming birds that have been as little as a few centimetres off target.

The courtship and mating season reveals a more domestic side to the gannet as strands of seaweed, grass, fishing line, and anything that grows near the nesting area are scavenged by both the male and female birds and used to form the base of the nest. When impregnated with vast quantities of guano, this fibrous nesting material forms into solid mounds upon which a solitary egg is laid. Both parents share the incubation duties and use a combination of their soft breast feathers and large webbed feet to keep the delicate egg warm. After 44 days of being shuffled, turned and rolled within its protective shell, a tiny naked chick finally emerges into the bleak world of the gannet colony.

Over the following weeks, both parents take turns at nurturing and feeding the chick a constant diet of regurgitated seafood. After a week, down starts to appear and at six weeks, the chick weighs as much as its 2 kg parents. Feathers—grey flecked with white in young birds— start to appear about this time and the young birds begin to practice flapping their wings. As if to give an added edge to their progeny’s interest in flight, the parents curtail the amount of food they bring. At about three-and-a-half months, the young gannets forsake their nests and—like many young New Zealanders—take off across the Tasman headed for the east coast of Australia. This arduous maiden flight probably takes from six to 15 days from Muriwai. For gannets born at Cape Kidnappers, east of Hastings, the journey is considerably longer. Most will travel up the east coast of the North Island before rounding North Cape to get to Australia, although a minority head through Cook Strait. These young travellers may rest on the water to regain their strength but are not thought to feed en route. In the Northern Hemisphere gannet species, youngsters that land on the sea are too heavy to lift off—newly-fledged birds weigh more than adults—and spend a week or two paddling about until they lose weight. The same problem is thought to arise with young birds crossing the Tasman. Although there are breeding colonies of gannets on islands off the coast of south-eastern Australia, the young birds from New Zealand seem not to settle down there. After maturing for three to seven years, they return to breed for the first time in the colony they were born into in New Zealand. For the rest of their lives, they remain in New Zealand waters. Exactly why young New Zealand gannets embark on this adolescent adventure remains a mystery. It certainly exacts a high toll. Studies at Cape Kidnappers suggest that only 25 to 30 per cent of the young birds that fledge make it back from their transtasman tour. Even so, the birds are long-lived—one banded bird survived for at least 30 years—and with protection for colonies, numbers of these splendid birds have been increasing steadily over the last 50 years.