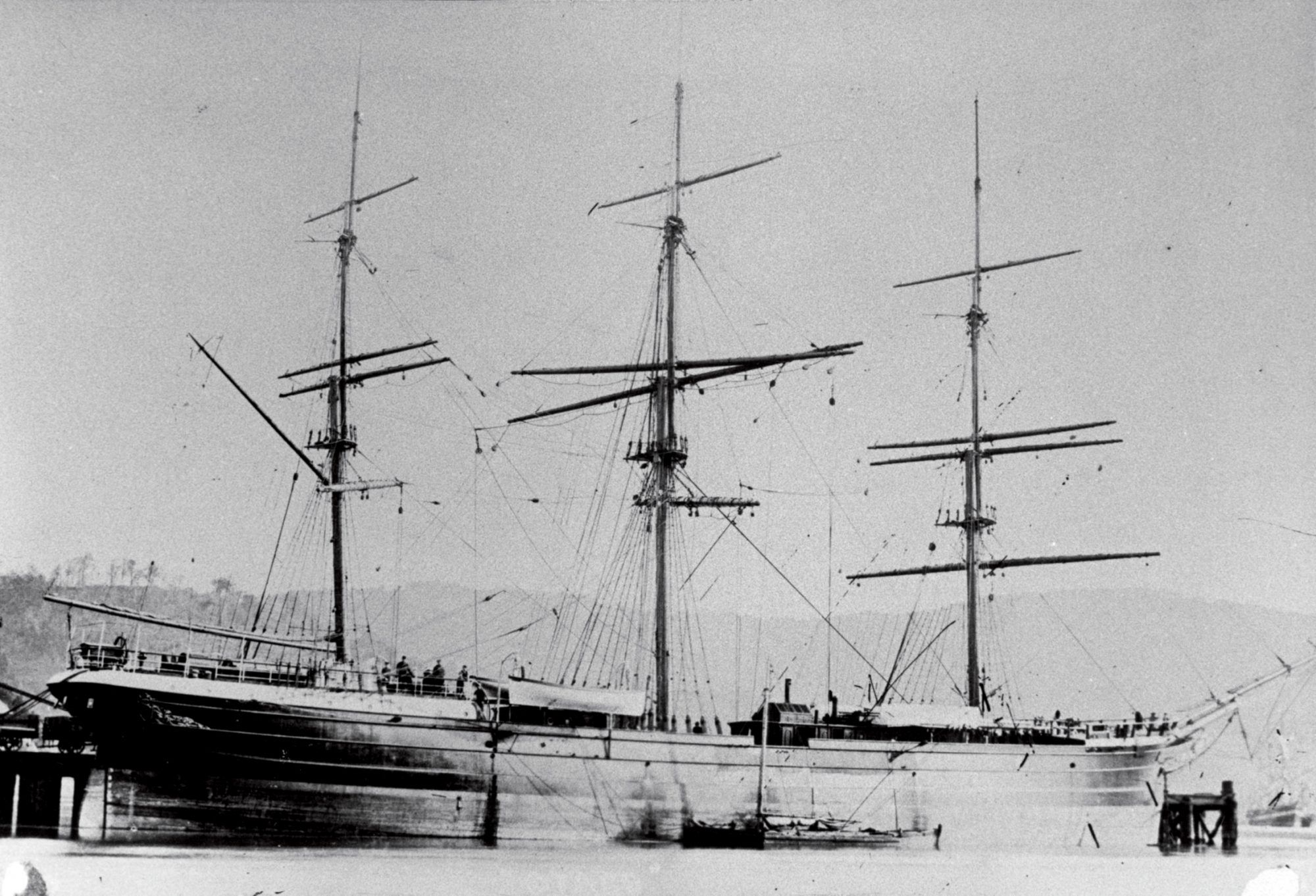 It wasn’t the £10 fee that caused Captain An­gus Cameron to refuse the offer of a tow to Port Chalmers on July 22, 1871. His small barque had arrived off the Otago heads that morning, and Cameron, Scots born and a former resident of the port, wished to complete the voyage from Liverpool in style—unassisted and under sail. The weather failed to cooperate, however. A persistent south-westerly gale prevented the barque from entering harbour, and after waiting three days at the mouth Cameron swallowed his pride and “took steam”. Towed up to her berth by the steam-tug Geelong, the vessel discharged explosives at the Quarantine Ground before landing 17 passengers at Port Chalmers. Such was the low-key arrival in New Zealand of the elegant 345-ton barque Otago, later famous as the only sea-going command of the author Joseph Conrad.

Otago had been hard-driven during the passage out. The shipping correspondent of the Otago Daily Times noted that the “handsome clipper barque” had taken just 88 days “land to land”, and in one 24-hour stint had reeled off 306 nm—very fast sailing for such a small vessel. She was also extremely seaworthy, having come unscathed through a two-day cyclone during which the barometer recorded the were invariably poorly paid, deserted their ships with monotonous regularity. Two of Otago’s 13 seamen had joined the exodus as the vessel lay at Newcastle, and Julier, a re­placement, wasted little time in doing likewise. Two other seamen jumped ship in Adelaide in December, when Otago called there to load wheat for London.

While in Adelaide, Cameron was sought out by three local businessmen—Thomas Grierson, William Taylor and James Simpson—who had taken a liking to his ship and were anxious to buy. Not wishing to sell—as he was mak­ing money and was more than satisfied with her perform­ance—Cameron naively suggested an amount £500 more than he thought the group would possibly pay. Unaware that ship prices had recently escalated, he was mortified when his figure of £5500 was readily accepted. Grierson and Co. of Adelaide took over the vessel’s management, and Otago remained in Australian ownership for the rest of her existence.

Conrad’s accession to Otago’s captaincy and the little ship’s dramatic voyage from Bangkok to Singapore in 1888 are documented in The Shadow-Line, an autobiographical account (although embellished) that opens with Conrad in Singapore, 30 years old and feeling very much out of sorts. Unhappy with the progress of his maritime career, he had recently resigned from his position as chief officer of the steamship Vidar and was surprised when offered the com­mand of Otago. The opportunity was too good to pass up, and Conrad immediately set off to join the vessel, which was languishing in Bangkok following the death of the pre­vious captain.

Eighteen years of hard sea-service had not dimin­ished Otago’s striking appearance: “Her hull, her rigging filled my eye with a great content,” wrote Conrad when describing his first impression of her:

I could see that she was a high-class vessel, a harmonious creature in the lines of her fine body, in the proportioned tallness of her spars…one of those craft that in virtue of their design and complete finish will never look old. Amongst her companions moored to the bank, and all bigger than herself, she looked a creature of high breed—an Arab steed in a string of cart-horses.

He went on board to find her beautifully maintained (her mate was so particular he would go about flicking specks of dust from the polished teak rails), and although most of the crew had contracted a bewildering array of tropical diseases he decided to put to sea as soon as pos­sible: anything was preferable to staying in a pestilential port.

Conrad set Otago’s bow toward Singapore, just 800 nm distant, but the passage was in trouble from the first. Beset by calms in the Gulf of Siam, the vessel struggled to make appreciable headway and on many days made none at all. Coleridge’s famous line “as idle as a painted ship, upon a painted ocean” must have often sprung to Conrad’s mind as, standing on deck in the overheated air, he searched the horizon for the hint of a breeze. Otago’s sailors remained so stricken with fever that they could barely trim the yards, and for much of the voyage the captain and ship’s cook were the only men unaffected.

On March 2, 1888, 21 days after leaving Bangkok, the barque arrived at the Singapore roads. Conrad had been on deck almost continuously, and without sleep for 40 hours during the final approach. He had extracted every ounce of advantage from each cat’s-paw of wind, but Otago, on aver­age, had made just 40 nm per day.

With her crew sick in hospital and a replacement crew on board, Otago sailed from Singapore on March 9 and reached Sydney on May 7. Teak logs loaded in Bangkok were discharged, and Conrad took the little vessel down to Melbourne. By July she was back in Sydney and loading a mixed cargo for the island of Mauritius, in the Indian Ocean.

Rather than the usual southern route to Mauritius, through Bass Strait, Conrad suggested to the ship’s owners that he take the vessel north-about, through Torres Strait and the Arafura Sea. Behind this proposal was a long-held ambition to negotiate the strait in the wake of Cook’s En­deavour, for Conrad, who had a fascination with exploration dating back to boyhood, rated Cook as pre-eminent among early navigators. Much to his surprise James Simpson grant­ed the request, with the result that Otago became probably the first vessel, and perhaps the last, to carry a cargo from Sydney to Mauritius by the northern route.

Otago traversed the dangerous shoals of the strait without incident and at its western extremity took a departure from Booby Island. Joseph Banks and Cook had briefly spent time ashore here on August 23, 1770, and this unremark­able little island was consequently hallowed ground. Conrad imagined Cook, “a lonely figure in a three-cornered hat and square-skirted laced coat, pacing to and fro slowly on the rocky shore,” perhaps contemplating an end to exploration and his return to England. In the course of negotiating the strait, Cook had proved the separation of New Guinea and Australia, the last major geographical achievement of En­deavour’s voyage.

Otago reached Port Louis, Mauritius, on September 30, 1888, after a passage of 54 days. Her stay lasted eight weeks (there are suggestions that the young captain had an un­happy love affair with a young woman from a prominent island family) and she sailed for Melbourne with a cargo of sugar on November 22. Conrad later described the vessel’s approach to the Australian coast in inimitable style:

It was a hard, long gale, grey clouds and a green sea, heavy weather undoubtedly, but still what a sailor would call manageable. Under two lower topsails and a reefed foresail the barque seemed to race with a long, steady sea that did not becalm her in the troughs. The solemn thundering combers caught her up from astern, passed her with a fierce boiling up of foam level with the bulwarks, swept on ahead with a swish and a roar: and the little vessel dipping her jib-boom into the tumbling froth, would go on running in a smooth glassy hol­low, a deep valley between ridges of the sea, hiding the hori­zon ahead and astern.

But he was not to experience such an exhilarating run in the vessel again. He made two short coastal voyages on Otago but in April 1889, after learning that Mauritius was again to be her next destination, relinquished his command and returned to Europe. His association with the “little barque” had lasted just 14 months but he retained fond memories of her for the rest of his life.

Conrad commanded a small river steamer in the Congo in 1890, then returned to deep-water sail­ing as chief officer of the wool clipper Torrens. In 1894 he abandoned a nautical career of 20 years to focus exclusively on writing. The critics received his early novels with enthusiasm, but commercial success proved elusive until 1913, when he achieved a bestseller with Chance. Popular recognition followed almost immediately, and by 1919 Conrad was widely accepted as the finest author of the time.

He is probably best-known for Heart of Darkness (1902), a chilling tale of colonial exploitation that derives from his Congo experience, and on which film-maker Francis Coppola based his 1978 opus Apocalypse Now. As with The Shadow-Line, works such as The Nigger of the Narcissus (1897), Lord Jim (1900, also successfully adapted for the screen), Youth (1902), Typhoon (1903) and Mirror of the Sea (1906) directly reflect his own maritime experiences and deep love of the sea. Sailing vessels on which he served are referred to with particular reverence, as when, in Mir­ror of the Sea, he mourns the loss of the barque Duke of Sutherland, wrecked at Timaru in 1882: “She’s dead, poor thing! a violent death on the coast of New Zealand.” He had been an ordinary seaman on the barque in 1878.

Conrad, who was Polish born (his given name was Jósef Teodor Konrad Korzeniowski), learned to speak English only after reaching adulthood, with the result—peculiar in such a literate man—that his speech was marked by a heavy central-European accent and poor pronuncia­tion. Success as an author brought monetary rewards, but financial management was not Conrad’s strong point and he was often in debt. On one occasion he left an of­ficial-looking letter lying unopened for fear it was a tax demand, only to discover—much, much later—that it was the offer of a knighthood (which he declined). He was a heavy smoker—the fingers on both hands were nicotine-stained over nearly the whole of their length—and the habit contributed to years of ill-health and, finally, death from heart disease in 1924 at age 66.

Otago outlived her famous captain by several years, although in undistinguished service. She changed hands regularly throughout the last decade of the 19th century, and in 1903 was purchased by the Melbourne-based shipping company Huddart, Parker & Co. Her masts were cut down and she was used as a coal hulk, first in Sydney, then in Hobart. This modest employment ended in 1931, and her final years were spent in slow decline on the banks of the River Derwent. The rusting remains of the once proud vessel were destroyed by fire in 1957.

The pilot of French Pass