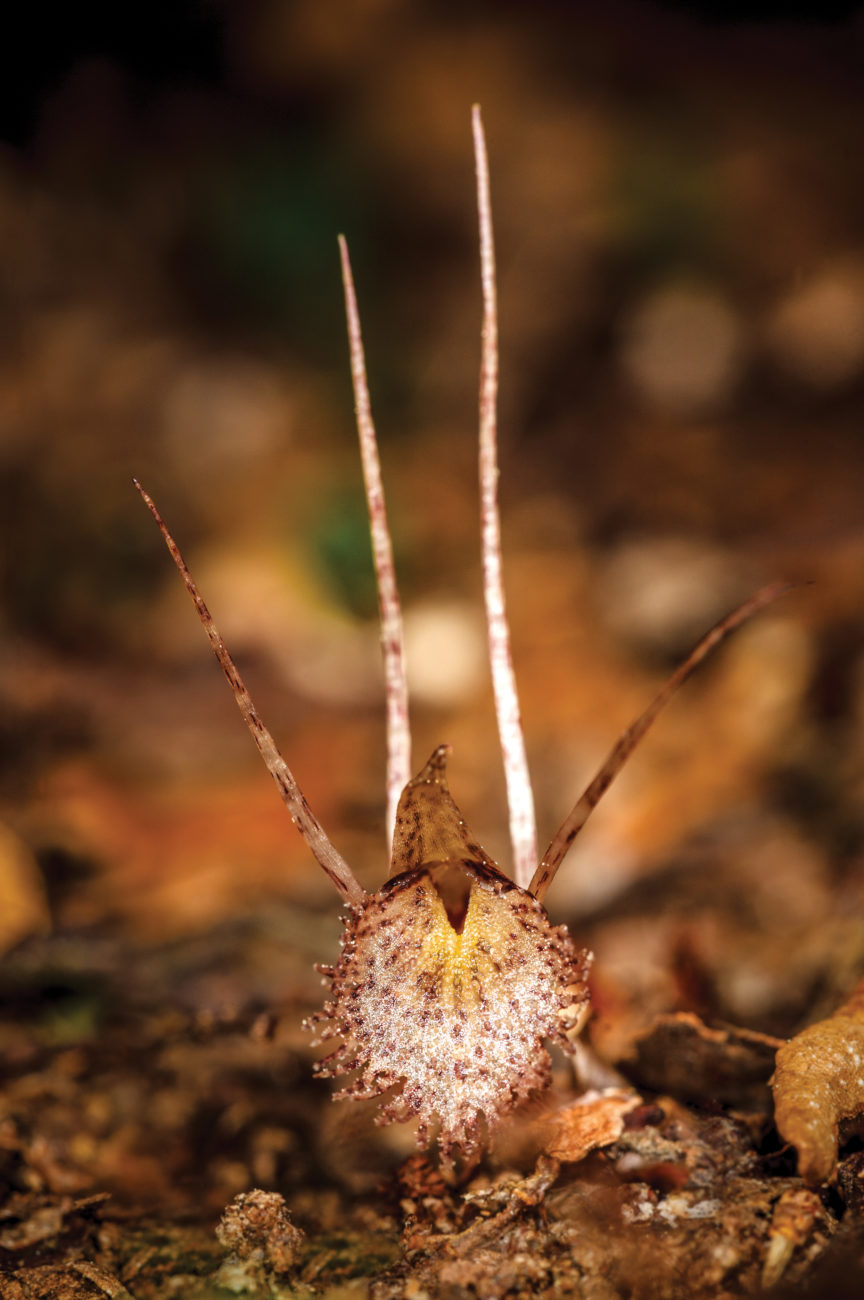 The ghost orchid is translucent and wispy—incredibly hard to see (or photograph) even when it’s right in front of you. This is because it contains no chlorophyll, which also means that it has lost the ability to make its own food. Rather, it draws nutrients from the leaf litter thanks to its symbiotic relationship with fungi.

For botanist Carlos Lehnebach, finding a ghost orchid flowering in the hills above Wellington represents the end of a long search.

He’s originally from Chile, but he’s been studying and living in New Zealand for the last two decades. Now he’s a curator at Te Papa who studies New Zealand’s strange orchids.

In 2008, Lehnebach learned that ghost orchids had previously been found in the Wellington area, so he started keeping an eye out during fieldwork in the hills.

In January 2019, he came across a few odd stalks in the leaf litter—brown sticks 10 centimetres tall with a brown capsule on top and a tiny red speckle on one side. To a practised eye, these are orchid fruits.

“So I left a tag on the spot where these things were and a few months ago, I just went there. And that was the orchid I’d been looking for.”

Te Papa has only one specimen of the ghost orchid, collected in the 1950s in the Hutt Valley.

“What’s pretty cool about it is that the plant is basically see-through because there’s no green colour in it. It’s using fungi to feed itself.”

It’s from the genus Corybas, which comprises about 135 species found throughout Australasia and Southeast Asia.

“The only one from the whole lot that doesn’t have chlorophyll is this one,” he says.

Using an old ghost-orchid specimen, one of Lehnebach’s students has been investigating DNA in the chloroplasts, the structure that contains chlorophyll, to see how many genes have been lost in order to stop photosynthesis.

“It has had a massive reduction in the DNA content—it has lost lots of genes and there’s a lot of changes in the DNA.”

Two other orchid groups in New Zealand have also stopped photosynthesising—now, Lehnebach is interested to find out why. 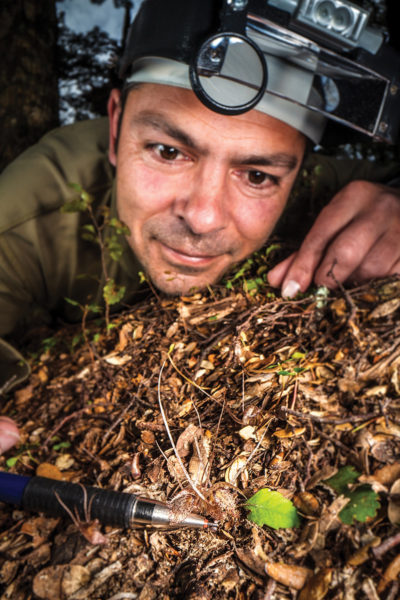 He’s not sure whether the ghost orchid is rare, or just incredibly difficult to find. Many New Zealand orchids are highly cryptic, and though Lehnebach has a trained eye, he finds them hard to spot.

“Normally when I go for a hike I don’t get to enjoy much of the surroundings, I’m focused on what’s in the floor in the leaf litter,” he says. “When I found the orchid, I was flat on my stomach on the forest floor for almost an hour.

“It’s so difficult to find, it could be that the hills where I’ve been looking are full of it.”

About 35 per cent of New Zealand orchids are threatened, so Carlos Lehnebach and others have been researching methods to propagate them from seeds.

In 2014, one of Lehnebach’s students identified the fungus that lives inside the roots of an native orchid called New Zealand lady’s tresses (Spiranthes australis).

“We managed to isolate the fungi from the roots, grow some on agar plates and use DNA analyses to identify them. We isolated several strands of fungi—one of them was the right one which managed to infect the seeds and trigger germination.”

The fungus acts like a key, unlocking the seeds and causing them to germinate.

“Now we have a method that we can use to start doing restoration.

“If you don’t know the fungi that orchids need, no matter how much seed you throw in the forest, there will be no seeds germinating.”